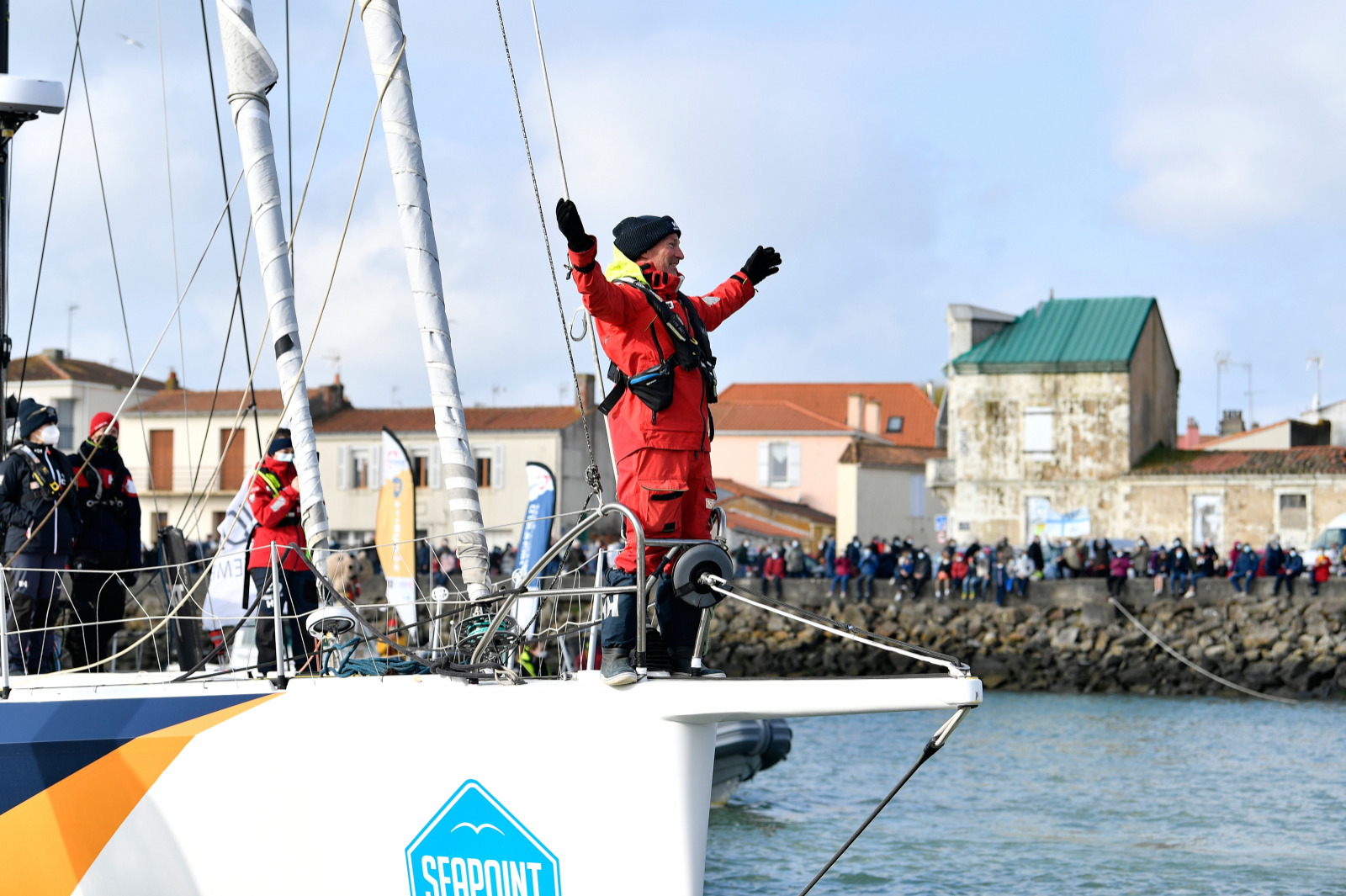 Ari Huusela, the last skipper to cross the finish line of the ninth Vendee Globe, was given a huge warm welcome as he sailed into Les Sables d’Olonne to complete the dream he has held for 22 years since he first sailed a 6.5m Class Mini across the Atlantic.

Here are the words of an emotional Finnish skipper who completed an exemplary race as an amateur skipper who races across oceans solo as a hobby.

At the pontoon, Huusela’s first words were:
I was crying most of the last night, I have been thinking about this for so long. I am so thankful to my team. Without them I would not be here. And to Alex Thomson, who was the first one who pushed me and helped me a lot to start the project. That was at the 2016 Helsinki boat show.

Since then, we have been well-connected, and the next summer I got the chance to sail on his boat from Poland to Finland. He and his team of professional guys got me into this. Alex helped a lot.

Tough moments?
The hardest was when the boat was slamming when the sea state was so terrible and confused. I though the boat would break into pieces. And it was so uncomfortable to be in the boat at that time, as it lasted two or three days. I called Niina and I said I had reached a point where I hoped the boat would break in two pieces and I could be rescued by a cargo ship to save me from it.

Cape Horn was big?
Since I started to dream about this race, Cape Horn has been such a big thing. You start to think about what your chances will be to see it when you are rounding it. The chances are not so big; you might have to round a long way off or in the night time. But in the end, I had perfect evening sun, nice conditions and I was able to go close and to talk by VHF to the lighthouse keeper. I was able to see the lighthouse blinking and that was amazing.

Climbing the Atlantic was quite tough, but the conditions these last days have been what I was hoping for. I was so happy and the last two days have been champagne sailing.

To have been to all the starts of this race since 1996 and to finally have finished today seeing all these people on the sea, in the Channel and now on land, is just amazing – to be able to enjoy it myself. I am so happy Les Sables d’Olonne and the Vendée region arranges this race – and so to see these nice people from Les Sables d’Olonne taking care of us is just lovely.

A victory for the support of his friends and family
This is a big victory for me. It was already a victory to be able to start. Now I am the biggest winner. It is very emotional now; it goes so deep into your emotions.

Every evening, every night for the last four years, I have gone to sleep thinking ‘am I able to finish this race, am I able to start the race’? And then once I had started the race, every day I was wondering when it would stop, what might be the major catastrophe that stopped me, a whale of whatever, but I had some good luck.

I had a well prepared boat with some good people; Joff Brown and Mikey Ferguson with whom I did the Transat Jacques Vabre with, who taught me to sail IMOCA 60s. And my amateur team around me who are my friends, my colleagues and my family, who are all amateurs. They have done such good work for the last four years, working so hard all the time to make me able to start and to make me able to finish.

And of course I feel the pressure of sailing, that I can’t be the weakest link in the chain, I have to finish, also to be able to do it for them.

I am proud of my friends and the team and all the people who have followed me with encouraging messages, that have powered me up when I have had low days or low moods. These people have kept me going.

Airline pilot and safety
As an airline pilot, there are a lot of comparisons to sailing, but the main thing for me is the way of thinking about safety. I was an aircraft mechanic, a maintenance engineer for many years, and there you start with safety as the first priority.

It is my way of thinking about the things you are doing. It doesn’t matter if I am going flying or if I am going sailing. I try to avoid all the risks in both. That is the reason I am here with a boat that is in good condition and safely back here. It maybe took a bit longer…