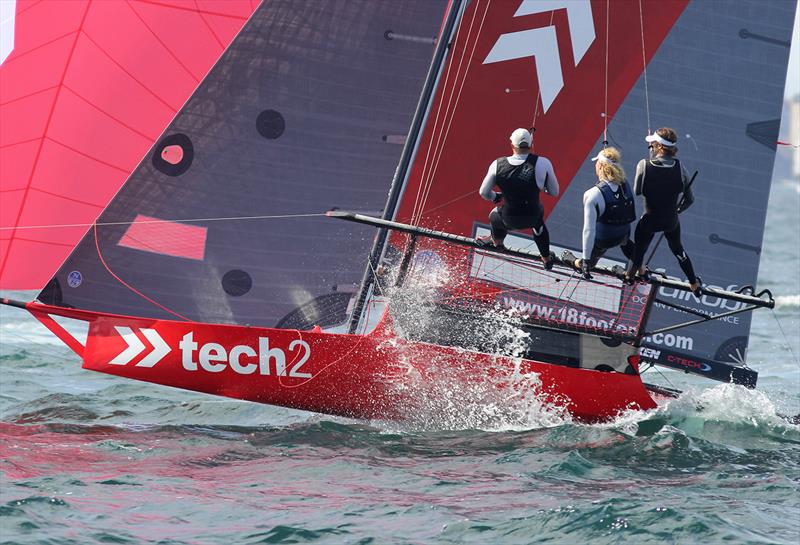 Since winning the last season’s Australian 18ft Skiff Championship in the then new tech2 skiff, Jack Macartney and his crew’s 2020-21 season has gone to another level of performance and consistency, the trio taking all three major championships held so far this season and so start favourites for the JJ Giltinan Championship starting today (Saturday).

Macartney, Charlie Wyatt and Lewis Brake’s teamwork has been close to faultless in every race since the season began on October 11. However, the trio realises they will have to maintain the standard if tech2 is to give them their first JJ Giltinan Championship victory.

Smeg’s skipper, Michael Coxon, ‘retired’ from the 18s after winning his third JJ Giltinan Championship in 2017. Returned to the fold, he has shown over recent weeks that the hunger is there to add to his already impressive record.

Along with his two former Giltinan-winning team mates, Ricky Bridge and Trent Barnabas, Coxon pushed the red-hot tech2 team to the limit in the recently completed Australian Championship. Just one point separated the two teams through most of the nine-race Championship, which was only decided in the final race.

The other big threat to tech2’s favouritism for the JJs is John Winning Jr’s Yandoo Winning Group, with his crew of six-time Giltinan winners Seve Jarvin and Sam Newton.

Business commitments as well as other sailing commitments for all members of the team have been reflected in this season’s results, but there is no doubting their talent.

Over the season to date, the ‘big three’ teams have established a slight edge over a large group of challengers for the 2021 crown, but last weekend’s final hit-out produced at least two more strong candidates.

Last Sunday, Keagan York, who has been around the top five in the past three JJs, won the final race of the Australian 18 Footers League’ s Club Championship on Finport Finance with Matt Stenta and Phil Marshall.

In the same race, first-season team Jim Colley, Shaun Connor and Harry Bethwaite finished third on Shaw and Partners Financial Services after leading for some time against the very strong, and experienced opposition.

They are a team to watch as Colley and co have recorded two second placings, one third and a fourth placing in recent championship races.

In the warm up Invitation Race, Yandoo took the honours by 1m19s from Finport Finance, with The Oak Double Bay-4 Pines a further 33s back in third place.

Spectators can follow the racing on board the club’s spectator ferry, however due to the COVID-19 policy, numbers are limited. Booking online through the Club’s website is essential: www.18footers.com.au/18-footers-sailing/spectator-ferry

For those unable to make it on the water, the Club’s live broadcast team will be on Sydney Harbour to capture all the action. Live streaming at: www.18footers.com by clicking on the ’18 Footers TV’ link.