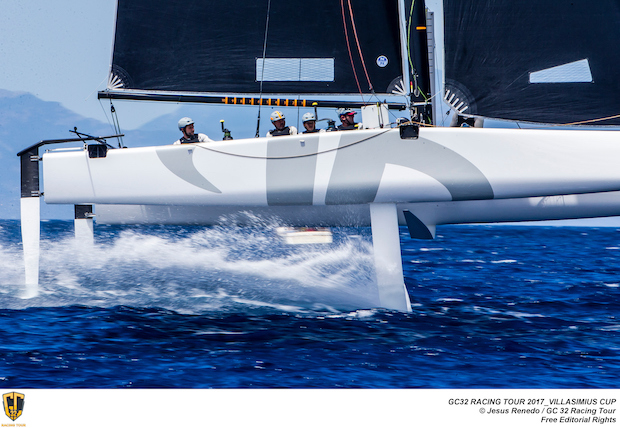 Jason Carroll and Team Argo were unstoppable at the GC32 Villasimius Cup after the American crew foiled to victory on a beautiful final day in Sardinia.

The breeze started around 10 knots from the west and built to 18 knots by the end of four windward-leeward races that saw the fleet charging downwind at speeds approaching 30 knots. It was the perfect conclusion to the second round of this season’s GC32 Racing Tour.

Carroll didn’t win a race today, but throughout the 10 races he never finished outside the top three, demonstrating a level of consistency that no other crew could come close to matching.

For an Owner Driver competing against Olympic medal winning helmsmen such as Iker Martinez on Movistar-Ventana Group and Erik Heil on Armin Strom, Carroll’s feat is all the more remarkable.

However, the level-headed American didn’t seem that surprised. “Some of us Owner Drivers show up at maybe more events than others, so we’ve put in the time and the practice on the boat which really helps us. I’ve got a great team around me and we divided up the decision making on board to help take the load off Alister [Richardson] and I think that has helped us this week.”

The battle for second place was a three-way battle that all came down to the final race. Martinez seized victory in race 10 and almost made his way on to the podium. Movistar-Ventana Group finished tied for third with Mamma Aiuto!, but it was Naofumi Kamei who edged out Martinez in the tie-break and made it to the podium.

While the tie-break kept them out of the top three, Spanish did come out the right side of a tie-break in the other close-fought contest of the day, the Anonimo Speed Challenge. After two speed runs each lasting around 90 seconds, the Spanish finished neck and neck with Argo on their best timed run. However the slower of their runs was faster for Martinez, earning him the Anonimo Nautilo watch.

It was oh-so-nearly an Owner Driver one-two for Argo and Mamma Aiuto!, but the Japanese boat was struggling as the breeze built later in the afternoon and finished last in the final race, allowing Realteam to pip the Japanese to the runner-up spot by just two points.

Despite finishing second overall, Jérôme Clerc was kicking himself for not starting better in today’s races. “We were not getting it right at the start,” said the Swiss winner of the GC32 Riva Cup in May. “Fortunately we were making good tactical decisions, picking good wind shifts and getting our way back into the races.”

The stronger breeze suited Malizia – Yacht Club de Monaco, with Pierre Casiraghi turning on the afterburners in the big conditions. The crew finished second in race 8 and for the start of Race 9 they launched off the line with split-second timing, extending an early lead to win comfortably.

Casiraghi and crew punched the air in delight, after some tough days earlier in the regatta. The start of the final race, once again it was Malizia who punched out to an early lead, until a gybe that put paid to their dream of back to back wins.

“We were on fire,” said Casiraghi, “but we picked up a knot in the gennaker sheet during a gybe and couldn’t grind it on. Was nice to get a race win, would have been even better to get two.”

Malizia tactician Seb Col said the big breeze conditions today were some of the best he has seen. “It was perfect sailing today, very fast, nice waves, a lot of fun, and good training for Palma. I think what we had today could be quite similar to what we get in Palma.”

This afternoon Jason Carroll and his crew held aloft the GC32 Villasimius Cup in the Marina di Villasimius. This evening the closing ceremony and final party takes place at the Valtur Tanka resort. The GC32 fleet will meet again in a month’s time at the 36th Copa del Rey MAPFRE on 2nd to 5th August.