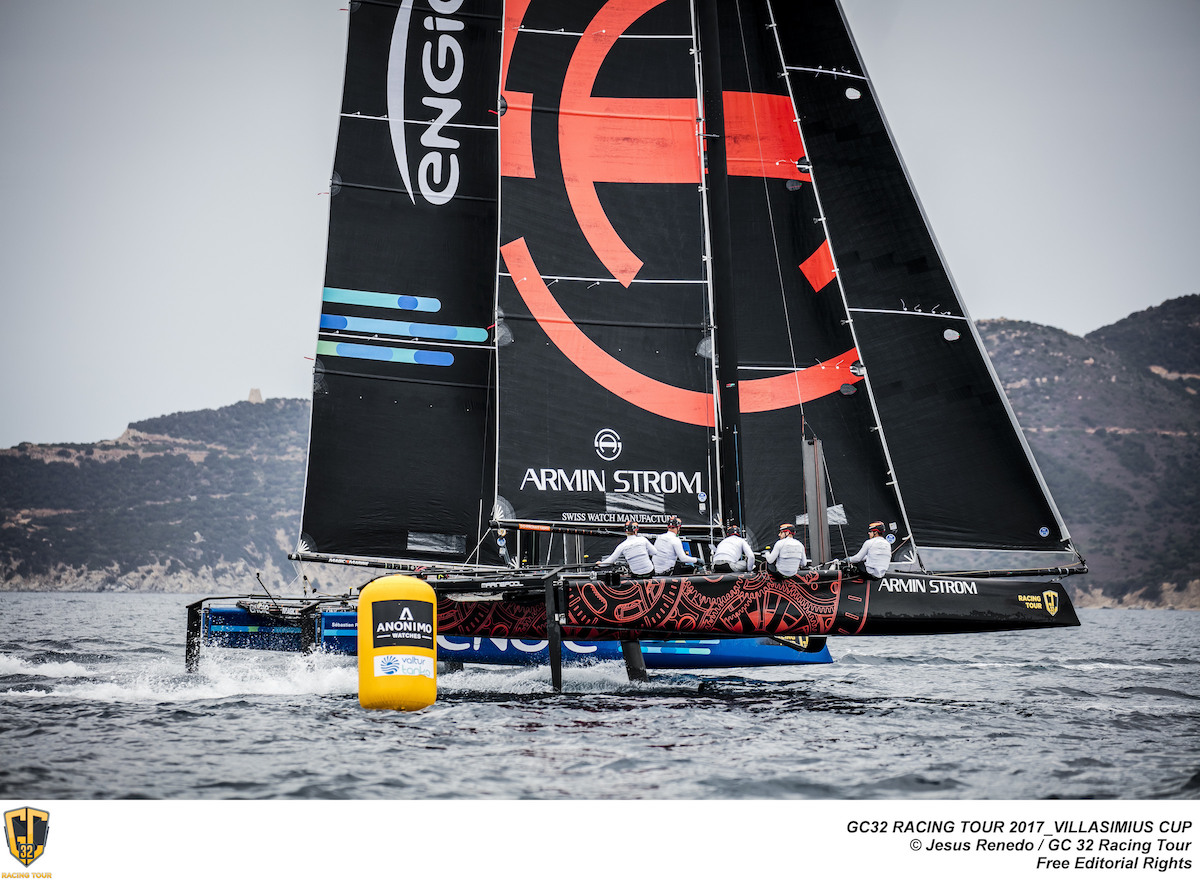 Realteam rose to second overall behind the hard-to-catch Team Argo on day three of the GC32 Villasimius Cup, however, it’s the owner drivers who continue to make the running at the GC32 Racing Tour in Sardinia.

Race 5, the first race of the day, got underway with a conventional upwind start in seven knots of breeze. Mamma Aiuto! was the early leader, Naofumi Kamei continuing to prove that often the Owner Drivers can be the equal of the professional drivers.

Realteam was only fifth around the top mark, but as crewman Lucien Cujean explained, they adopted a different tactic on the downwind leg: “The others were going for speed and getting full foiling downwind, but sailing a lot of extra distance. We sailed a bit lower than the others and went from fifth to second by the bottom gate.”

Jérôme Clerc steered Realteam around the left-hand mark almost the same time as Mamma Aiuto! sailed around the right-hand mark. From that point their fortunes diverged dramatically, as Realteam hooked into a sudden increase in breeze to 13 knots, combined with a 30-degree wind shift that carried them swiftly to the top mark.

The Swiss went on to win the race comfortably while Mamma Aiuto! – last to catch the new breeze – was dumped from first to last.

With an increase in breeze, the race committee reset the course for a reaching start. However, the fleet was pushing hard and it took two general recalls before the principal race officer, Stuart Childerley, brought in the Black Flag. Even then, on the third start, four boats started early and were BFD (Black Flag Disqualified).

Team Argo, which had finished second in the first race, won this one and had the best day by far. The only others to score a finishing position were Team Engie and Mamma Aiuto!.

The Japanese were last across the line, not realising how many disqualifications had been imposed on their rivals, so a third place was a pleasant turn of events, according to crewman Hervé Cunningham: “After missing out in the earlier race, finding out we were third in the next race was the nicest surprise of the day.”

The fleet got away cleanly in the next race, except for Armin Strom, which had to take a slow-down penalty for crossing the line too soon. Things became worse for the Swiss crew when they sailed into a big hole, while the rest of the fleet sailed away.

Argo was at the back of the pack, but fate dealt the American team – and Armin Strom – a good hand when the race officer felt compelled to abandon the race in the dying breeze.

Competitors are now looking forward to the stronger winds forecast for Saturday. Jason Carroll has been on fire so far in Sardinia and extends his lead in the overall standings and the Owner Driver Trophy. The other teams will need to be at the top of their game if they’re to topple Argo from the top of the leaderboard.

Behind Argo, a close battle is in play between Realteam and Mamma Aiuto! who are on equal points. Just a point behind them is Movistar-Ventana Group, and it could have been even better for Iker Martinez if he hadn’t fallen foul of that Black Flag.

The predicted increase in breeze tomorrow will offer an opportunity to send the boats tearing down the track in the Anonimo Speed Trials. The first warning signal for racing is scheduled for 1130 hours and it’s going to be a busy day of competition.

This evening, competitors, organisers and guests are invited to the ‘Cena Sociale della Lega Navale Italiana Villasimius’ dinner party, hosted by the local sailing club, with the prospect of local specialities including grilled port, fish, pasta and vines. It will be a chance to share stories from the regatta so far, and to hatch plans for a final successful day on the water on Saturday.