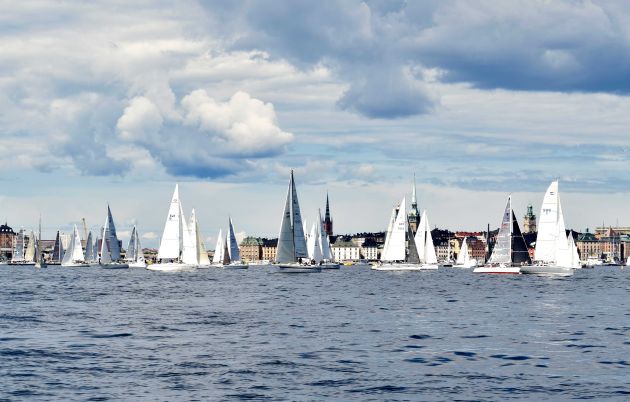 ÅF Offshore Race 2017 has started. Tacking starts in light winds on the sunny Stockholm waters meant that the crews on the 241 boats had to make difficult decisions between taking time consuming manoeuvres or sail on in inferior winds in order to gain distance.

The starts, in the Royal Swedish Yacht Club´s classic regatta round Gotland, went smoothly. The only incident was in the class SRS A start when First 40.7 Blueprint miscalculated it´s position. As they tried to avoid a false start they instead collided with the starting vessel. The boat Blue print had to make a 360 degrees turn as penalty.

The last start was the Classic class with all the beautiful wooden yachts. They do not sail all the way around Gotland as the other boats, but go directly to Visby and back. The offshore cruiser and last year´s winner of the Classic class, Ballad, had a beautiful start. Among the other old wooden yachts is Peter von Seestermühe from Germany. This very yacht took part in the first round Gotland in 1937 and now after 80 years it is back again.

Now they have all started the 350 NM long adventure. The fastest boat can be expected to arrive in Sandhamn already on Monday evening, but for most of them the race will be much longer – probably two to three days.