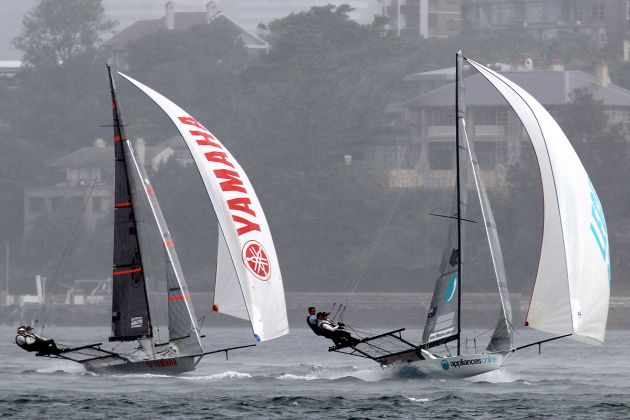 Australia finally broke the New Zealand dominance so far in the 2017 JJ Giltinan 18ft Skiff Championship, sponsored by The Winning Group, when Appliancesonline.com won an incident packed Race 3 of the championship on Sydney Harbour today.

The race began in a light East wind before a rain squall hit the fleet on the spinnaker run to the bottom mark off Kurraba Point. Visibility was non-existant for the spectators, and when the fleet finally emerged from the gloom several boats had capsized. Finally, after the squall passed, the fleet sailed the windward leg to Rose Bay, but the dramas weren’t over as the wind died completely as the fleet were on the next spinnaker run to Kurraba Point.

With the wind now gone completely, race officials decided to shorten the course at Kurraba Point and Appliancesonline.com.au was declared the winner. It was a welcome change of luck for the Appliancesonline crew of David Witt, Tom Anderson and Tom Clout, who were plagued by gear problems in the first two races.

Appliancesonline’s winning margin was 7m15 from Thurlow Fisher Lawyers (Michael Coxon, Trent Barnabas, Dave O’Connor) with New Zealand’s Knight Frank (Riley Dean, Luke Stevenson, Tim Sneddon) a further 2m6s back in third place. The rest of the fleet were becalmed and it was another 27 minutes before the fourth boat crossed the finish line.

Yamaha (David McDiarmid), winner of each of the first two races, retired with gear damage and is well back on points, but will still lead the championship once the result is discarded.

There is also a protest on the race plus others pending from earlier races and all point are provisional only at this stage.

Howie Hamlin (USA) grabbed the early lead at the Rose Bay windward mark when he took Harken to a 10s lead over Thurlow Fisher Lawyers. There was a group of close challengers including Line 7 (Jonathan Whitty), Asko Appliances (Marcus Ashley-Jones), Peroni and Triple M (James Ward). Harken maintained the lead to the wing mark off Clark Island with Thurlow Fisher Lawyers in close contact.

As the fleet set off from the wing mark for the tight run to Kurraba Point the rain squall hit and visibility was down to near zero for those watching the race. When the squall was gone and visibility cleared there were numerous skiffs capsized.

Thurlow Fisher lawyers had taken the lead from Line 7 but Appliancesonline was revelling in the freshening breeze and rapidly closing on Thurlow Fisher. The only other skiffs in the lead group were Ilve (Ollie Hartas) and Knight Frank.

As this group approached Rose Bay the wind became very light and Thurlow Fisher Lawyers came back to be just 15s behind Appliancesonline. When one of the Thurlow crew slipped and the skiff capsized, Appliances was left with a big lead which the team held in the dying wind.

David Witt was happy with his team’s result and claimed:  “It’s amazing how one day can change a championship.

“We had a problem in Race 1 when the mast didn’t fit the boat, then had to go with our #1 rig in Race 2 (while everyone else used the #2 rig) when our little rig broke.”

Many teams suffered badly from the dying wind today as they dropped back from prominent positions to finish near the tail of the fleet.

The overall position of the championship will be a little clearer after tomorrow’s protest hearings and Race 4.

A spectator ferry will follow each of the races in the championship, leaving Double Bay Public Wharf alongside the clubhouse, at 2.30pm on each race day.

All races will be live streamed from the Camera Cat and the drone, a world's first. Head to 18footers.com to watch the race live or catch up later.