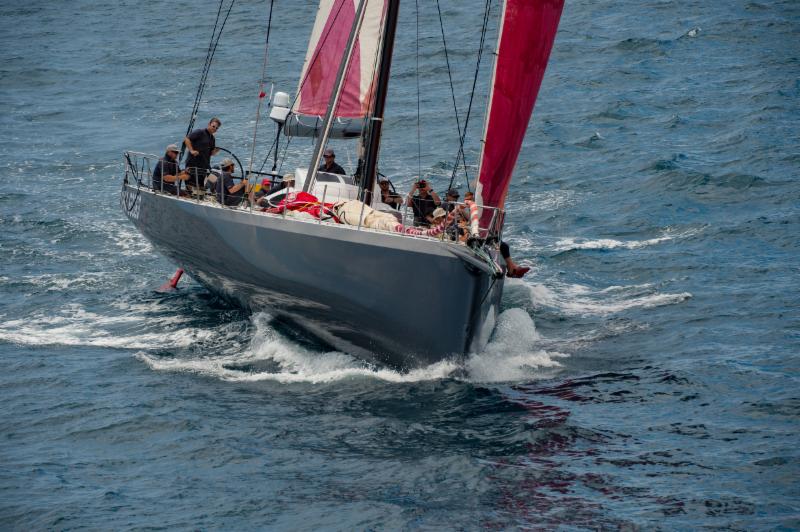 Line honours winners for multihull and monohull are expected to finish the Antigua Bermuda Race tomorrow, Tuesday 16 May 2017. At 1000 ADT on the fourth day of the race, the US Merchant Marine Academy's Volvo 70, Warrior, skippered by Stephen Murray was 305 nautical miles from the finish in Bermuda, hitting a top speed of close to 20 knots.

At their current average speed, Warrior will pass the finish line at St. David's Light, Bermuda around dawn tomorrow, setting the monohull race record. Allegra, the Nigel Irens-designed catamaran with Paul Larsen, world speed sailing record-holder on board, is about 30 miles astern of Warrior and expected to finish the race before sunset tomorrow, setting the multihull race record.

Warrior's navigator, Will Oxley has raced around the world four times and is a graduate of marine ecology. Will emailed the media team describing the mood on board and to give us all a lesson before we discard that straw or plastic bottle after use.

“Another day of champagne sailing on the Warrior. As we rotate around the high, maximizing downwind VMG consumes the majority of our focus. Three freeze-dried meals to break up the trimming, driving and sail changes, keeps the time moving along. Every now and again a striking blow of reality reminds us all how privileged and fortunate we are to be out here. The full moon last night making a headlamp unnecessary or the pod of whales playing off our bow today! This is not our ocean, and to be a guest is a privilege well beyond the average. Amongst the sargasso patches, there is a constant shame in the form of plastic! Those of us that have sailed in different pieces of the ocean for the better part of the last decade can all agree that the plastic problem has got much worse. A sobering thought juxtaposed by the constant beauty of our environment,” reports Oxley.

Numerous Bermudian yachts in the Antigua Bermuda Race are heading home after many months away from Bermuda.

The 112ft three-masted tall ship, Spirit of Bermuda has been in the Caribbean all winter, racing and taking guests on charter to highlight Bermuda's seafaring heritage and to train youngsters on board. Over 4,000 Bermudian teenagers have sailed on her since her launch in 2006. During the 35th America's Cup, Spirit of Bermuda will proudly serve as a VIP Spectator boat. Watch Leaders on board Spirit of Bermuda for the Antigua Bermuda Race are three young Bermudians who have learned their skills on board; Dkembe Outerbridge-Dill, Patrick Perret and Lamar Samuels. “Glory!” commented Dkembe when asked to describe the race in one word. “We are racing to win and coming home to Bermuda, having sailed thousands of miles since we left, will be glorious.”

Carl M Soares Sr. is the skipper of Morning Star. The hull and deck of the Paradise 60 was built in the Netherlands in 2004 and Carl completed the fitting out himself, taking 10 years to meticulously finish the project. Having finished the race, this will be the first time that Carl will have brought his pride and joy to his home, Bermuda. Morning Star is a family affair, Watch Captain Marty Loftus has daughter Kelly and son Ryan for crew.

“I come from a family of seafarers, whalers, sea captains and boat builders,” comments Carl Soares Sr before the start in Antigua. “I have spent a lifetime in the boating community, including participating in international powerboat racing as well as sailing events, both local and international. I raced in the Tornado Cat class as crew with Paul Elvstrom and as navigator for the Newport Bermuda Race. I have sailed over 60,000 miles and 2,000 miles single handed,” proudly exclaimed Soares.

Whilst Swan 90, Freya is owned by Californian Don Macpherson, Captain Joph Carter was born and bred in Bermuda. “We have completed this race course on delivery several times, but haven't ever raced to Bermuda or competed as a team offshore,” explains Carter. “Hailing from Bermuda, I have a lot of drive and motivation to bring home the silverware, plus it's probably the fastest way to get a real Dark 'n Stormy!”

Les Crane, Antigua Bermuda Race Chair/Past Commodore of the Royal Bermuda YC is competing in the race with old sailing friends from Canada who have joined him on his Farr 56, Monterey. “The variety of the fleet shows the wide appeal of the race and bodes well for the Antigua Bermuda Race to grow in future editions,” commented Crane. “The America's Cup in Bermuda has ignited interest in the race this year, however it is a well-known route for yachts leaving the Caribbean bound for the Eastern Seaboard of the United States as well as destination in Europe. Our intention is that the Antigua Bermuda Race will be an annual event, popular with a wide variety of yachts.”