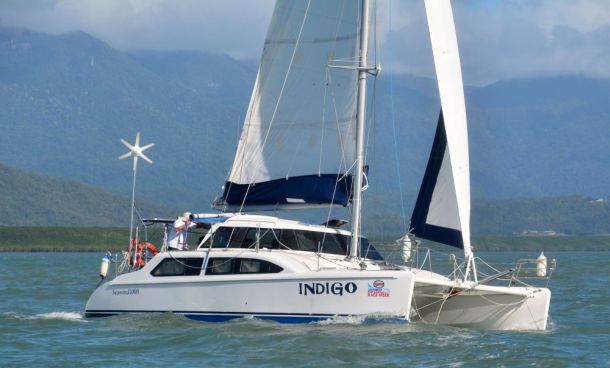 How do you improve on perfection? That's what visiting yachties must be asking about the conditions at Mickey Ink Port Douglas Race Week. Although the day dawned with threatening clouds offshore, by race time at 10am they had been replaced by bright sunshine. And once again Huey came to the party, delivering winds of around 20 knots with occasional gusts to 30 knots, just to keep the mainsheet hand on his or her toes.

The six remaining entrants in the Multihull division did another passage race around Snapper Island but this time they didn't have to beat south to the Low Isles as well. That made it another early day for the crew of the Nacra 36 Menace, which flew around the course in just over 55 minutes to record her fourth first and fastest from four races.

Every other boat except the modified Grainger Barefoot took twice as long which, as one wag commented, meant they had twice as much fun.

On handicap the Seawind 1000 Indigo owned by club Commodore Colin Simpson took second place ahead of Barefoot, and they hold the same places overall. Menace leads the division by six points with one race to go, meaning her name will almost certainly be engraved on the Clipper Cup tomorrow night.

It was “all change” for the big boats in the first race today, with Benetau proving a good brand to own. Mick Gwilliams Beneteau 440 Lady Mystique took first place on handicap ahead of Doug Ryan's Beneteau 44.7 Shazam (which was fastest) and Robert Cleland's Elliot 9.6 Wild Spirit.

And just to confuse the handicappers, results were turned on their head in the second race of the day when Joel Bruce's Farr 40 Guilty Pleasures held off Shazam for line honours. On handicap it was another Farr, the modified 11.6 Dusty Muzzle (Ron Knott) that was placed first, followed by Wild Spirit and a Farr Phase 4 Volare 1 (Westerly and Robson).

Consistency has been the key for Dusty Muzzle which sits on 13 points, five points clear of both Shazam and Wild Spirit. The title is technically still up for grabs but a prudent punter would feel Ron Knott has one-and-a-half hands on the trophy.

The jib and main boats also enjoyed their day on the water. In the first race Cambell Corbett continued his winning form with the Adams 12 Jimmie, taking first and fastest, his third bullet of the series. John Poole's Beneteau 38.5 Now Or Never was second and Carl Barnett's Phantom Casuarina was third.

Jimmie was fastest again in the second race, but fell victim to its own success, dropping to fourth on handicap. The first three were Alan Littlefields Bavaria 44 Dreamagic, followed by Now or Never and Andrew Burford's Jeanneau 45.2 Tucana.

The series scores are tight, with Tucana holding a three point lead over Jimmie, which is just a point ahead of Casuarina.

The second race was a triumph for the women, with Becky Bower taking first on handicap ahead of Mickey Ink's amazingly decorated and modified Etchells Berocca Daze. Kaizen II was third and Ketchup was fastest.

Overall, the gaps are starting to widen but it's still anyone's series. Ruff Red sits on top of the table on 11 points, three clear of Kaizen 2 which is three clear of Ketchup.

Tomorrow all boats will sail a long triangle, windward and return race with conditions forecast to remain similar to today. In the evening, trophies will be presented and tall stories told.