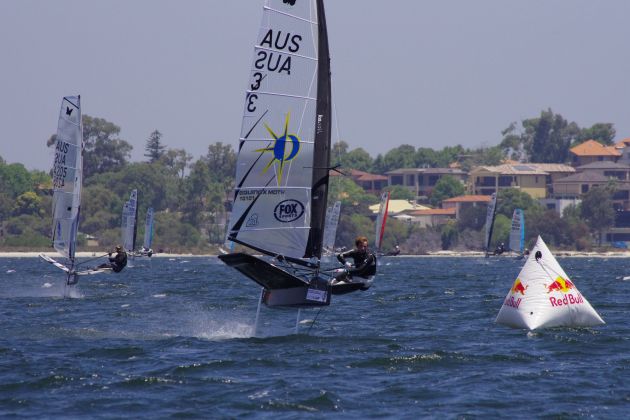 Perth delivered a fantastic day's racing on day three of the McDougall McConachy Moth Australian Championship in hazy sunshine and a more stable 15 – 16 knot westerly and flat water. Perfect foiling conditions for the fleet of 54 moths. Three more races and the same names beginning to take a hold of the championship leaderboard.

It was another masterclass by Josh Mcknight from RPAYC in Sydney. He blitzed the fleet in all three races even with a slight hi-cup in race 2 of the day when his outhaul came apart forcing him to nurse his boat downwind! His boat handling skill and raw speed sees him open up a 14 point lead overall.

Having another consistent day, Rob Gough from Tasmania enjoyed the fresher conditions. (3,2,4). Rob just dropped two places on the final leg of the last race of the day choosing the wrong side of the race track. The slightest mistake and you get punished at this level!

“On the last leg a couple of people went hard left and got an absolute ripper of a lift and came in, you have to work really hard, you can’t ease back at all, hike your guts off upwind and try and pick the shifts downwind.” Rob Gough

Also sailing very consistently is Brit, Ed Chapman who finished the day with a (4,4,3) to keep third overall and local WA sailor Steve Thomas carding a (2,5,7). He sits just off the podium in fourth.

Staying in the mix at the top end of the fleet is Andrew McDougall (VIC), and the NSW moth squadron, Kurtis Warner, Warren Sare and Les Thorpe.

Despite the threat of the Scotsman with the infamous starting rifle (PRO Les Swinton), a number of mothies were caught over the start line (OCS)  in judging their time on distance to the gun. Unlike most classes the moths start at full tilt and the front runners are already 500 meters ahead after one minute of racing!

One sailor who got caught today was Kohei Kajimoto of Japan who uses up his discard but still stays in 7th overall. Kohei recently married Wakako Tabata who is in a real battle with Emma Jane Spiers for the title of top female in the championship. Emma currently sits in 29th and Wakako 30th.

The skill level at the top end of the fleet is a joy to watch but for many its a achievement to get round the course in one piece without too many wipeouts. The free supply of Redbull on shore helps some to last the distance.

In the last race of the day a cruiser fleet racing in an afternoon twilight race looked to be in danger of an invasion by a cluster of moths doing around 25 knots but thankfully the wise PRO armed with his shotgun had already made arrangements with the organising club to avoid any catastrophe.

So it was a weary but mostly happy fleet of moth sailors returning to the comfort of the host club South of Perth Yacht Club for the now obligatory snags and Matso beer on ice.

The penultimate day of racing starts at the regular time of 1300hrs local.  Stay tuned for more frantic foiling frolics.

For full results go to: http://www.sopyc.com.au/on-water-list/2016-international-moth-australian-championship/.