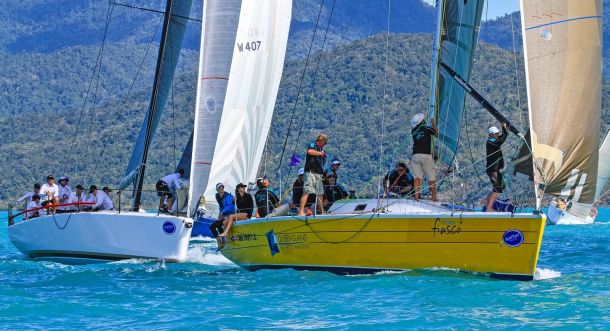 When Queenslander Damian Suckling hits the water with Another Fiasco at Airlie Beach Race Week in August, he will be happily swapping one style of sea life for another.

Suckling spends most of his life aboard ships for employer Offshore Unlimited, a company providing a comprehensive range of offshore services including offshore installation re-supply and survey, seismic ship re-supply and scientific research, servicing Australia's oil and gas industry.

When we caught up with him, the Abell Point Yacht Club member had been working off Dampier in Western Australia and was heading to Tasmania, itching to get back to his Jutson 43, which lies in wait for the Whitsunday Sailing Club’s popular Race Week.

“My job doesn’t give me much time at home or for sailing these days,” admitted Suckling, who is targeting the Performance Racing Class trophy at the 26th running of Airlie Beach Race Week, to be held from 7-14 August.

“I haven’t done anything exciting race-wise for a long while, so I can’t wait to jump aboard Another Fiasco. We’ll be trying to win, but I’m also using it for crew selection for the Sydney Hobart,” said Suckling, whose nickname ‘Damage’ comes from his love of pushing boats hard.

As a member of Abell Point Yacht Club, the local yachtsman will put it all on the line as he attempts to outclass the local and interstate competition.

The other ‘local’ is Kevin Fogarty, owner of the Beneteau First 47, Twister. Fogarty, a Whitsunday Sailing Club member who has filled the roles of Commodore and Rear Commodore of the Club numerous times, has been involved with the event one way or another since 1991.

In his current role as Rear-Commodore: Offshore, Fogarty is remarkably busy behind the scenes helping to safeguard Airlie Beach Race Week’s enviable reputation.

“He’s kept pretty busy with Race Week, so his racing performance can be up and down,” Suckling says of Fogarty. “But you can’t discount him; he could be right up there as we’ve seen in the past.”

The Queenslanders will have strong opposition from their interstate contemporaries, including Victorian yacht, Charm Offensive. It is owned by James Permezel, who moves out of the comfort zone as trimmer for Bruce Taylor of Chutzpah fame, to helm his Hanse 445.

This week, entries for the 'Tropical Festival of Sailing’ reached a milestone 100. Competitors are now left with just four days before the Saturday, 1 August Close of Entries, so organisers urge yacht owners to come aboard now.

“Anticipation is building for what will be the most inclusive and community focused Airlie Beach Race Week in the 26-year history of the event. We want the whole town to be involved,” Committee Chairman, Jim Hayes remarked.

Entry is online only and closes on Saturday 1st August 2015. The race committee may accept late entries after this date, subject to an additional late fee of $150.00, so save by entering now.

Berths are filling fast at Port of Airlie and Abell Point Marina, so we urge you to act quickly.

For entry form, Notice of Race and all information, go to: www.abrw.com.au/