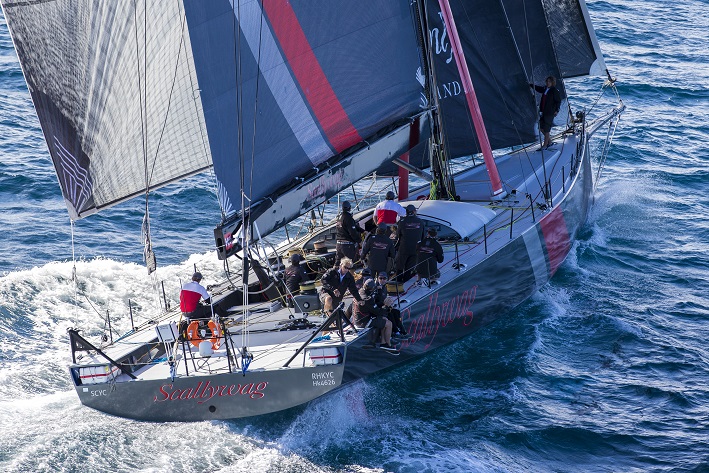 Three of the four super maxis taking part in the 2016 Rolex Sydney Hobart Yacht Race will clash on Sydney Harbour in the highly anticipated SOLAS Big Boat Challenge, organised by the Cruising Yacht Club of Australia.

The Oatley family’s Wild Oats XI, Seng Huang Lee’s Scallywag and Anthony Bell’s Perpetual LOYAL will go to combat again, as they did last year, but are they the same boats?

Since her most radical transformation yet, the Oatley family’s record breaking 100-footer has been tweaked – and more. Wild Oats XI’s new bow shape has made a dramatic difference to the yacht’s speed both up and downwind, so no longer requires the retractable horizontal wing to provide lift, so it has been removed.

Scallywag is the former Ragamuffin 100. When Hong Kong’s Seng Huang ‘S.H.’Lee bought it, it was off to the shed in Newcastle for a makeover, inclusive of changes to the water ballast, not to mention a new sail wardrobe and a distinctive new paint job. In September, she broke the Groupama around New Caledonia Race monohull record.

Perpetual LOYAL has also undergone a mysterious makeover in Newcastle – this after Anthony Bell declared last year was his last. But back he is, minus the celebrity factor, instead favouring the likes of sailing ‘names’ Tom Slingsby and, Chris Nicholson. Bell is ready to lay to rest the demons of the last two Challenges and Hobarts once and for all.

“We’re the baby of the fleet,” Rupert Henry said, “but we’ll be doing our best.”

Let none tell you it’s a fun race, because it is taken very seriously, which is plain for all to see. The SOLAS Big Boat Challenge provides a great spectacle on Sydney Harbour – not just yachting enthusiasts, the general public too, who have taken the race to heart.

Starting on Sydney Harbour at 12.30pm, the annual event is a test of speed, stamina, fancy crew work and psychology. And it raises money and the profile of the SOLAS Trusts’

The CYCA SOLAS Trusts were established following the tragic loss of six lives in the 1998 Sydney to Hobart Yacht Race and is governed by a board of Trustees. This is the ninth year the race will be sailed to raise money and awareness for this charity.

“Well in excess of $1.5 million has been donated by those participating in the sport with the vast majority coming from the CYCA and its members,” SOLAS Trusts’ Chairman, David Kellett said.

“The Trusts have a 100% flow through to the beneficiary from donations making them unique, with all administration and management costs absorbed by the CYCA,” he ended.

The SOLAS Big Boat Challenge takes the yachts on a 14 nautical mile course starting off Steele Point Vaucluse, downthe Harbour to Manly for two and a half lap course takes yachts past many of Sydney’s famous landmarks along the way, including Fort Denison, Mrs Macquarie’s Chair and the Sydney Opera House, which provides the picturesque finish line.