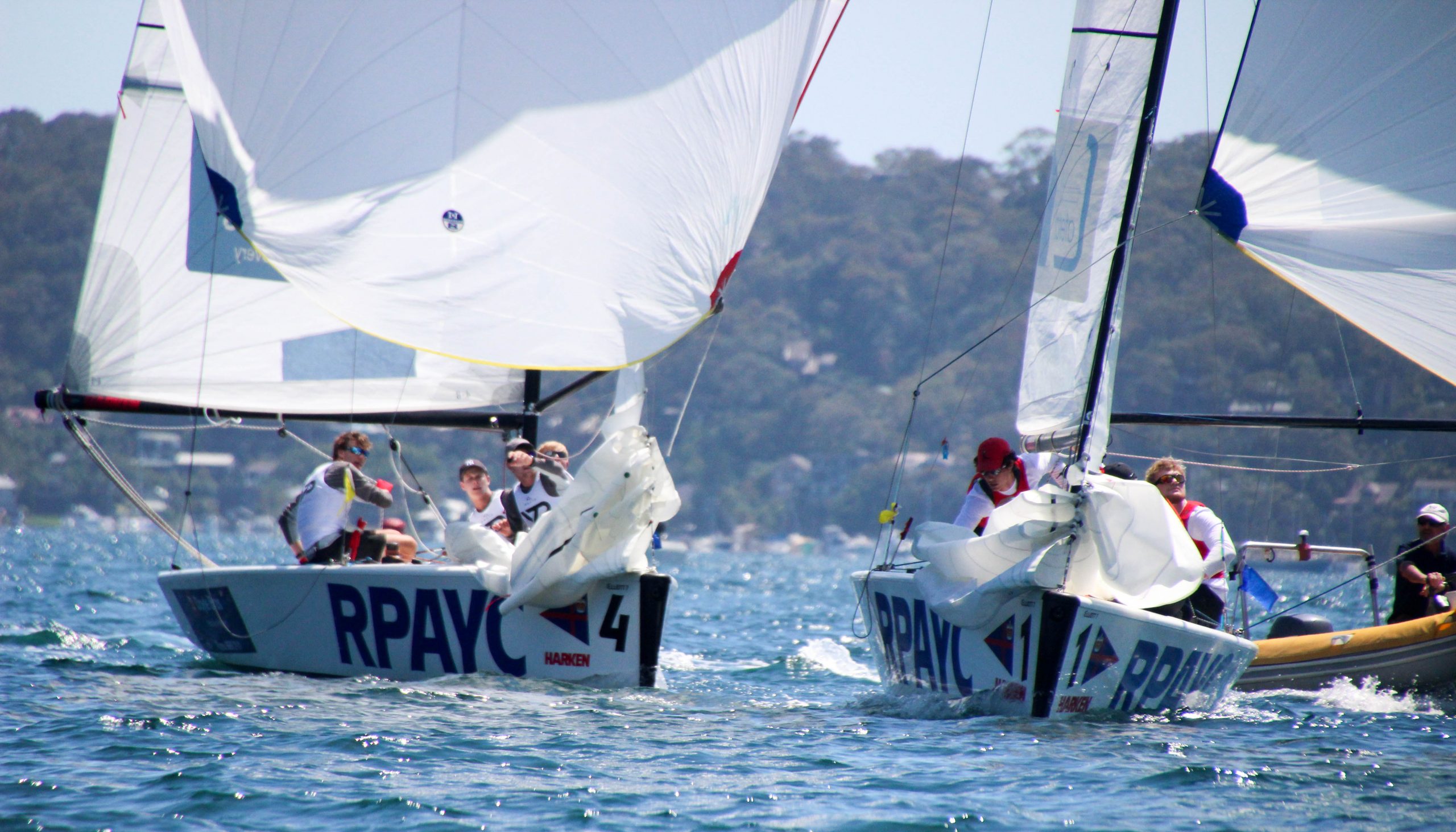 North-easterly sea breezes 14 gusting to 18 knots on Pittwater paired with bright spring sunshine capped off four days of similarly ideal conditions for the 12 competing teams, eight of them international.

Over the four-day knockout round robin format Takahashi’s Pacific Racing Team and their training partners, James Wilson’s Royal New Zealand Yacht Squadron team, proved round after round they had the pace, flair and match racing nous to deserve a finals berth.

The finals were definitely a balancing act for RNZYS coach Reuben Corbett who trains both teams, thereby requiring him to carefully divide his loyalty when two sets of protégés ended up squaring off.

Overseen by race officer Ted Anderson and his highly polished race management and umpire teams, Pacific Racing Team wrapped up the series 3:1, then added their own unique and ummeditated post-match celebration.

At the finish Takahashi was wrestled off the helm by Josh Wijohn and into the water. Then, in the excitement of their victory bowman Taylor Balogh repeated the celebration on Tim Snedden, leaving the Elliott 7 sailing downwind crew-less until the boat was recovered without incident.

“It’s my first time helming at the Harken and my first big international win,” Takahashi said back at The Royal Prince Alfred Yacht Club. “James is also in the Royal New Zealand youth program and today felt like we were training back in Auckland, except there were a lot more spectators and umpires. All of us are mates.”

Similar to New Zealand’s Peter Burling and Blair Tuke, who went from Rio 2016 gold medal performances to helping secure the 2017 America’s Cup for Emirates Team New Zealand to the Volvo Ocean Race, the next tier of Kiwi youth match racers are shoring up the country’s sailing future, if the talent on display at the 25th anniversary Harken International is anything to go by.

“We definitely all look up to Pete and Blair as sailors and great guys,” Takahashi added. “They are a big inspiration and we want to be like them one day.”

Though he lives in Auckland, should Takahashi move forward with his 49er skiff plans for Tokyo 2020 he is aiming to qualify for the host country, Japan.

First, second and third place take home match racing points plus a bundle of cash each, thanks to the event’s naming rights sponsor of 20 years, Harken Australia.

“You guys have been written into the event’s history books and Harken is proud to be a part of it,” Harken Australia managing director Grant Pellew said at the trophy presentation. “There are a lot of top teams who came from this event but it’s also about those youth teams who aren’t ranked, but who get the chance to learn from the others, and maybe make it to the top one day.”

The Harken’s striking perpetual Rockin’ Robin trophy was originally donated to the RPAYC by Robyn Wiltshire-Newman. It is named after a boatload of young Australian men, including her husband and son plus other club members, who along with their boat Rockin’ Robin were tragically lost at sea back in 1990 en route to Fiji.

Takahashi joins a long list of past Harken winners engraved on the trophy, some of whom have gone on to represent their countries and sailing at the highest levels.

Starting Monday November 27 the Musto International Youth Match Racing Regatta fires up out of the Cruising Yacht Club of Australia with even higher ranked youth skippers (under 23) among the starting line-up, including fourth in the open world rankings, Harry Price, the pre-regatta favourite.