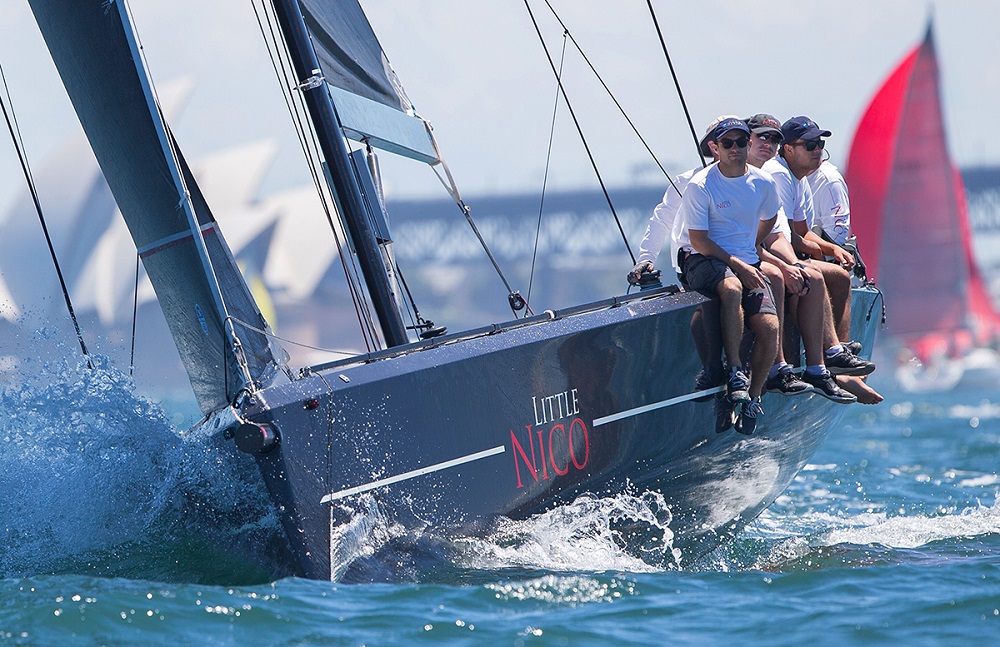 Paul Clitheroe and his Balance crew won yesterday’s race and backed up this afternoon with a second win to take out both IRC and ORCi point scores in Division 1. The TP52 beat Andrew and Pauline Dally’s DK46, Khaleesi for the IRC spoils and Steven Proud’s Kernan 44, Swish (winner of PHS) to claim the ORCi title.

And what did the ‘Money Man’ think of the new hybrid race? “I thought it worked incredibly well – I was unsure how it would go before setting out. Congratulations to Middle Harbour Yacht Club for their forethought in trying something new – it’s never easy being the first,” Clitheroe said.

“The first part was a windward/leeward course, but the second time up we did the hybrid course, then had Code Zero run to virtual mark – we all probably went a couple of more boat lengths than necessary, just to be sure – then blasted back into the Harbour in 10-14 knots and finished with a spinnaker run up the Harbour.”

As the Sydney yachtsman pointed out: “Everyone got a go. If you are a boat that performs well in windward/leewards, that was your chance, if you are a strong reaching boat, you got a go there. Everyone had their chance to shine – on top of it just being a wonderful day out sailing.

“I think we only got Khaleesi by 20 odd seconds today (it was 27 seconds). Getting out with Steve (Swish), Khaleesi, Toy Box 2 and the rest – we’re all smiling, because we enjoying racing against each other. So we’re delighted to win the SSORC. We’re headed back to the Club now to enjoy the wonderful hospitality we always receive there,” Clitheroe ended.

In Division 2, Phil Dash and his Beneteau F40, JustADash looked to have the game sown up, but Dash retired after finding they did not correctly round the virtual mark, meaning fellow MHYC members Jack Stening and Col Gunn (Stormaway), found themselves in the winner’s box, following up on their victory of yesterday.

Going hard left of the start was the right action in Division 2. There was a lot of set offshore and the leg out to sea was two-sail reach – no great tactics, but the fleet pushed on. And despite the breeze filling in, Stormaway, a goer in the light, claimed second place in the race to Conspiracy, enough to win overall.

According to Dash, “Conspiracy (David Hudson’s Sydney 38 which placed third overall and won PHS) sailed well today. We were ahead at first mark, but they came back at us with good speed while we struggled in the lighter breeze.

“We had just enough to get there in the end,” he said of their 1 minute win this afternoon before realising his error and retiring. He wasn’t alone, as Neil Padden (Wailea) retired also after not sailing correctly through the gate.

Those contesting the North Sails Super 12 Spring Regatta wrapped up their event with three sprint races on Sydney Harbour. Steve Barlow was in front after yesterday’s race and finished how he started – in first place.

“We raced in a windy 15-20 knot nor’ easter on windward/leeward courses,” Barlow said late this afternoon. “It was very trying, but also exhilarating, with 20-30 degree wind shifts, and great boat speed under spinnaker.”

Barlow told how former 18ft skiff champion, Rob Brown, steered Easy Tiger for Chris Way. “Yeah, he’s a sailor of note and beat us in one race. We were swapping the lead down the final run all the way to the finish.

“My secret weapons were Seve Jarvin and Sam Newton – you have to have the pros on these boats – they’re exciting to sail and they’re a handful,” he explains, admitting you need to have a mix of pros and non-pros to sail the boat properly.

Barlow chartered the MC demo boat Lightspeed for two seasons, giving it a tickle up courtesy of regular crew, Mitch White, who was his adversary today on Little Nico.

“I was offered the opportunity to buy the boat last season and we haven’t looked back. It’s a wet boat in big breeze and touchy to sail, it’s just a great boat.

“This is the first of the Super 12 series and we’re trying to get more bowsprit boats – this was the inaugural regatta and we are now growing the series,” ended Barlow who also sails Farr 40s and Etchells.

For results and all information on the SSORC, please go to: www.ssorc.mhyc.com.au