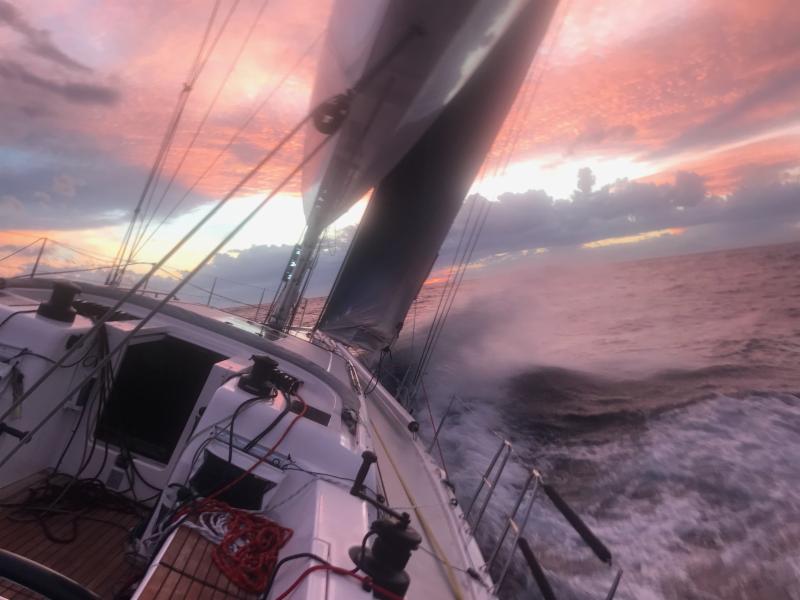 Third day at sea in the RORC Transatlantic Race to Grenada - photo from on board Friedrich Boehnert's Xp-50 Lunatix.

28/11/2017
As dawn broke on the third day of the RORC Transatlantic Race, the northerly route across the Atlantic looks to be the favourite for many of the 23 teams taking part in the race. Jens Kellinghusen's German Ker 56 Varuna leads the charge towards the low pressure system which has attracted the fleet to this route. The low has moved further north east than predicted allowing the fleet to take a more direct heading across the Atlantic. To the south, the convergence zone, acting as a barrier to the tradewinds, is the focus of attention for Ludde Ingvall's Australian Maxi CQS which has chosen the southerly route.
After beating into big seas for most of the second day, CQS tacked south at around midnight last night. To reach the tradewinds, CQS need to cross a convergence zone, an area of scarce wind approximately 100 miles across. The Australian Maxi has pointed its bow towards the coast of Senegal, West Africa and will be hoping to have picked the narrowest gap. By sharp contrast, Roman Guerra's Volvo 70 Monster Project is 370 nautical miles (682 km) north of CQS, blasting along on a tight reach into the low pressure system and experiencing close to gale force conditions.
Varuna has been the fastest yacht in the fleet, racing close to 300 miles in the last 24 hours, and of the yachts north of the rhumb line, Varuna is closest to the finish. Amongst the Maxi Yachts, Canadian Southern Wind 96 Sorceress, skippered by Daniel Stump has passed Jochen Bovenkamp's Marten 72 Aragon and pulled out a six mile lead. However, Eric de Turckheim's French Nivelt -Muratet 54 Teasing Machine continues to impress, as does Bo Teichmann & Thomas Jungblut's German Elliott 52 Outsider. The two smaller yachts have covered a similar distance as the two Maxis in the last 24 hours.
In the Class40s, Mathias Mueller von Blumencron's Red has covered 200 miles in the last 24 hours, to pull out a 30 mile lead on Berthold and Tobias Brinkmann's MarieJo. Gerald Bibot's Belgian 42ft Catamaran Zed 6 is north of the Class40s and is now clear of the wind shadow of the Canary Islands.
In IRC Zero, two young German teams are locked in a close battle. JV52 Haspa Hamburg, skippered by 21 year-old Max Gaertner, and JV53 Bank Von Bremen skippered, by Alexander Beilken. In IRC One, Bjoerne Woge's Andrews 56 Broader View Hamburg has raced 176 miles in the last 24 hours, more than any other team in the class.
Friedrich Boehnert's Xp-50 Lunatix, and Chris Stanmore-Major's Whitbread 60 Challenger have for now chosen to race the rhumb line towards Camper & Nicholsons Port Louis Marina in Grenada. Arno Boehnert aboard Lunatix is already looking forward to the spice of Grenada.
“It's all good on board Lunatix, but we are bashing upwind at the moment,” reported Arno Boehnert in a race blog. “Tonight we are eating our delicious freeze-dried food with hot sauce, which you never want to forget when you are racing the Atlantic! Rounding the (Canary) Islands we had a pretty tough day with everything from light winds to strong gusts, so we really needed to stay focused. Earlier we had a great battle with Broader View Hamburg, but now no other boats are in sight. We are on our own.”