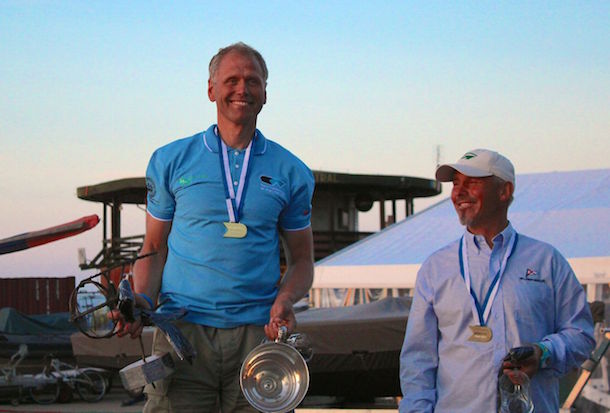 It was certainly a day of two halves in Puck. The first half was one of mystery and confusion. While some of the fleet were mystified why the first attempt at race 8 was abandoned at the windward mark after a 70 degree wind shift, others were mystified why the re-sail wasn't abandoned when the wind deserted the course for 20 minutes on the final upwind and then popped up in the corners to completely change the finishing order. But everyone was confused by the pressure and direction changes that continued unabated all day long.

The second half continued when the breeze shifted 180 degrees and for the first time this week the fleet sailed a northerly upwind leg. The other major change was that the sun came out properly for the first time in a week. As the fleet now leaves Puck, typically, a week of high temperatures and low rainfall is forecast.

The first attempt at race 8 started under black flag and half way up the beat it was clear a change was coming. On the right the wind gradually veered 70 degrees bringing the middle up to the mark. Confusion reined at the top mark as the race committee tried to abandon without any flags. Several major contenders including Budzien, Stefan Myralf (DEN) and Pawel Pawlakzyk (POL) were quite relieved as they were all on the left and very, very deep.

On the re-sail in a slightly more stable wind, Pawlakzyk favoured the right this time to round first from Antoni Pawlowski (POL) and Dawid Kania (POL). The leaders stayed in control round the next lap but it all changed on the final upwind. The wind was easing as the fleet rounded the gate mark, but switched off completely for 15-20 minutes as they negotiated the final upwind. Lots of the leading group were stranded in the middle with no way back. A few on the left found some pressure and ended up beating to the finish from way beyond the layline. Gradually the middle clocked up to the line while the right side reached down. Despite the disgruntled sailors, the race officer let it run. Kania won from Myralf and Andreas Pich (GER). Regatta leader Budzien struggled across in 17th. Jim Hunt (GBR) was one of eight black flags and decided to call it a day.

The final race was looking doubtful for a while with not many sailors exactly keen to repeat the previous race. But half an hour later a 10-12 knot northerly appeared and a course was set.

It was probably the best race of the week in brilliant sunshine and a more stable breeze. It was also time for the old man to show who was the boss. At 70 years of age, Jørgen Lindhardtsen (DEN) had won the practice race and then a series of bad luck followed with two black flags and a deep result on the shifty race 4. However he put that to right in race 9, leading from start to finish and extending for a very popular win. He also choose this week to sail his very oldest boat, which he used when he returned to the class in the 1990s. Cumbley crossed in second with Myralf third.

So Andre Budzien wins his second title following his victory in 2012. Charlie Cumbley wins the silver at the first attempt and is surely someone to watch closely in the years ahead. Bo Petersen wins the bronze, his first OK Dinghy Worlds medal after four years of trying.

All told it has been an interesting week in Puck, some extreme weather and extreme wind shifts, far too much rain, a little bit of sunshine, great hospitality and most importantly of all, a worthy champion in André Budzien. Next year the OK Dinghy World Championship heads to Quiberon in France.