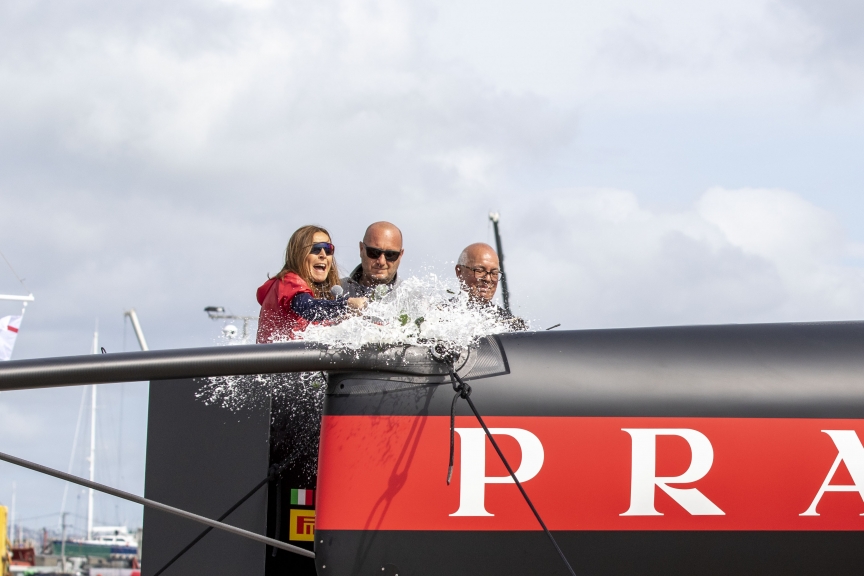 The Italians of Luna Rossa Prada Pirelli Team have launched their race boat Luna Rossa today at 1030 NZT during an official ceremony held at the team’s new base on Hobson Wharf.

The ceremony was simple and traditional, enhanced by the blessing of Luna Rossa by Father “Pa” Peter Tipene, Cathedral Dean of Auckland Cathedral, and followed by the christening of the boat by Tatiana Sirena, wife of Team Director and Skipper Max Sirena, as she broke on the bow a bottle of Ferrari Maximum Blanc de Blancs from Cantine Ferrari, the team's “sparkling partner. The local Maori welcome ritual accompanied Luna Rossa in the final phase of the launch as she was lowered into the sea.

The hull, built at the Persico Marine shipyard in Nembro (Bergamo), reached Auckland on October 6th on an Antonov cargo plane, the largest transport aircraft in the world. In the few days that separated the arrival of the boat from the launch, the foils, the on-board systems and instrumentation were installed and set up in record time to be ready to sail right after the first load tests, which started one hour after the launch.

“Boat 2” is the natural evolution of the previous project, developed on the basis of the data collected during the intense navigation period in the Gulf of Cagliari, and elaborated by the by the design team, with the close collaboration of the sailing team whose feedback was essential to the process. As on “Boat 1”, the new hull will also feature technology details designed in partnership with Pirelli. Among these, thanks to this company’s ability to create innovative materials for tire technology, is a component, used for all parts that touch the water, that adds performance at the highest speed range.

For the first time, the AC75 class boats competing in the 36th America's Cup will race against each other in the waters of Auckland in the PRADA America's Cup World Series and the PRADA Christmas Race, scheduled to take place from December 17 to 20.

From January 15th 2021 the competition will heat up with the PRADA Cup event (15 January – 22 February 2021), the Challengers Selection Series that will determine the team challenging the Defender, Emirates Team New Zealand, in the Final Match of the 36th America's Cup presented by PRADA (6-21 March 2021).

Patrizio Bertelli, President of the Luna Rossa Prada Pirelli Team, declared: “First of all, I would like to thank the Persico boatyard and all its staff who managed, despite the difficulties of the moment, to respect delivery times and allowed us to use this second boat who, for many aspects, represents an evolution of the first. I also want to thank the whole team: they have worked day and night, with no distinction of roles, to be on deadline and ready to launch today. In a few days we will already see “Boat 2″ sailing and will get our first impressions, which I am sure will live up to expectations. And, soon after, racing starts. My best wishes to everyone at work on this sensational project.”

Marco Tronchetti Provera, Pirelli Executive Vice Chairman & CEO declared: “My compliments go to the whole team and to the boatyard for this new boat that encompasses the experience of these first months of training and navigation. I am proud that I can say that Pirelli’s technology is on board, fruit of continuous innovation, that allows us to compete in disciplines at the highest levels such as Formula 1. It will be nice to see the Italian Luna Rossa flag flying in the America's Cup. Fair Winds to the Italian team.”

Max Sirena, Skipper and Team Director of Luna Rossa Prada Pirelli added: “Today is an important day in our challenge for the 36th America’s Cup presented by PRADA. The launch of the second Luna Rossa is the culmination of over 3 years of work of the team and all our partners. It is the start of the most important phase of the campaign; the team has worked hard to prepare for this moment and it is great to see the motivation on people's faces in these weeks of work here in Auckland. Everyone knows how important this moment is: now we are getting to the heart of the matter. I want to take this opportunity to thank the whole team for the work done; from now on we will no longer have control of our time, the countdown to the first race has begun. I thank Patrizio Bertelli, for having allowed us to get here, together with Marco Tronchetti Provera and all our sponsors and partners. The program is to start sailing a few days after the launch to prepare for the first regattas, the PRADA ACWS Auckland and the PRADA Christmas Race.”

With three AC75s now out of their sheds, the countdown to the 36th America’s Cup has officially started. The next few weeks will all be about getting these new boats out on the water and up to speed, pushing the development and getting ready for the first race of the PRADA ACWS Auckland on the 17th of December.

The Luna Rossa Prada Pirelli Team AC75 launch has been streamed live on the team’s Instagram page, watch the replay.