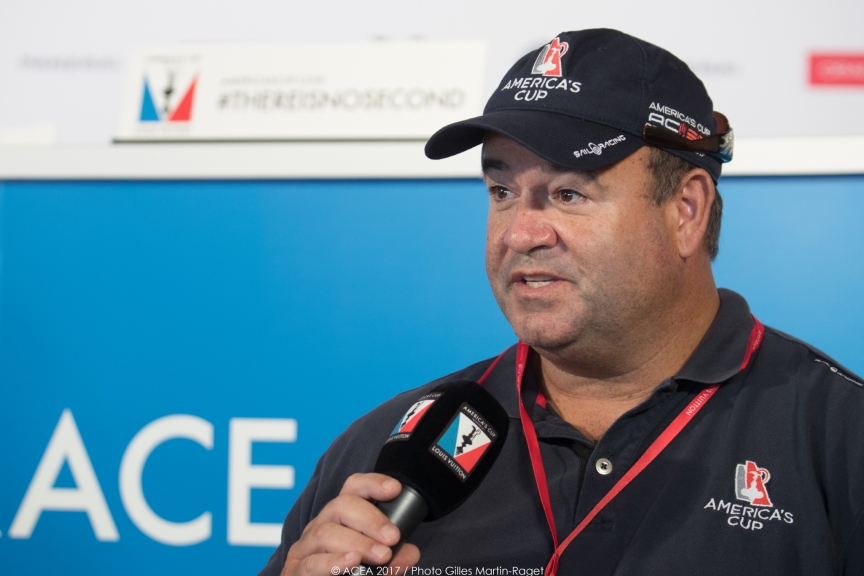 The words of a key character in the 35th America’s Cup who is more than happy to remain anonymous, but due to the close-quarter and dramatic nature of the racing in Bermuda, someone who has found himself thrust into spotlight.

Richard Slater’s deep sailing knowledge, integrity and authority gifts him with the ideal armoury to deal with the intense pressure in his positions as the Vice Chairman of the Racing Rules Committee of World Sailing and as the Chief Umpire for the 35th America’s Cup, as appointed by the competitors.

“The teams can also play a big part in that, because we are only called into the spotlight when they break the rules, so they affect that.”

It is a view that has already been tested on multiple occasions throughout the enthralling and unpredictable racing seen on Bermuda’s Great Sound and most notably in a contentious Louis Vuitton America’s Cup Qualifiers Round Robin 1 race between Emirates Team New Zealand and Artemis Racing.

“We have to almost have the decision before a penalty call is made so as soon as it does we have an immediate answer,” revealed Slater on the challenges the ACRM umpires face.

“The world of sailing we are in now, we have so many facts, our job is to prioritise the facts we need to look at and which facts we have to put aside.

“You have to turn off the other information and what you are seeing and hearing from the boats because each call is different.

“That’s the biggest change we have had, we now have to prioritise the data rather than go hunting for it.

“It is a massive management battle but we do our best to make what we feel is the right call quickly from all the facts we have and see what the most likely outcome should be.”

Just as in all sports, umpires are not infallible and even with the best sailing umpires in the world that are overseeing the 35th America’s Cup, Slater and his team had to later admit that their decision against Artemis Racing, on reflection, may have been different.

However, as seldom seen in many other major sports, Slater did not hide from the mistake, far from it, he instead stood in front of the glare of the world’s media and took full responsibility for the incident.

“Transparency is definitely important for what we do. We are happy to hold our hands up when we are wrong but also it is important for the teams to know that when we feel a decision is correct, we mean it and they have to respect that.

“In rugby for instance everything stops and a video umpire can make a call after watching a replay multiple times.

“We don’t have that because sailing doesn’t stop, particularly with these boats because they are so fast, if we hesitated to make a call, something else could have happened in the meantime.

“There is also nowhere for us to hide out there or afterwards with the media attention so it is always in our best interest to be transparent and is something we always pride ourselves on.

“That communication between us and the teams is crucial. Any rule changes are discussed with the teams and so it is important that everyone body understands what is going on and there are no misunderstandings.

“I don’t like being in front of the media and cameras but I am getting more and more used to it.”

With this instalment of the America’s Cup proving more unpredictable than ever before, you would not bet against Slater getting further opportunities to become just a little more accustomed to his newfound place in the spotlight, as the sport continues its drive to become easily understood and accessible to a broader fan base than ever before.