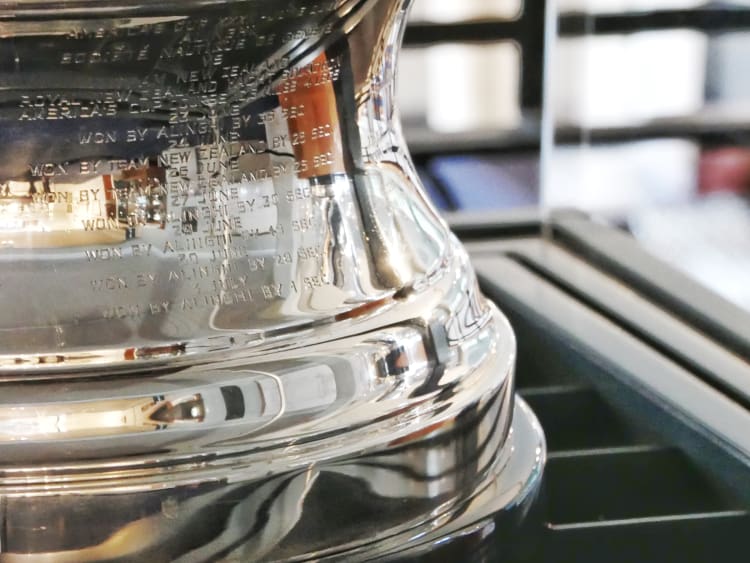 The super-sized Swiss engraving on the America's Cup. Photo: Supplied.

As Newsroom.co.nz reports, Team New Zealand and the Royal New Zealand Yact Squadron have discovered a problem – there is no room to engrave their name as the 2017 winners:

The New Zealand guardians of the America’s Cup are about to rewrite a historic wrong.

In 2003 and 2007, an over-zealous Swiss engraver etched the results of Alinghi’s Cup wins onto the world’s oldest sporting trophy – but in a bigger font than any before them.

Now that the Auld Mug is back in the hands of the Royal New Zealand Yacht Squadron, there is a small hitch – there is no more room left to chronicle Emirates Team New Zealand’s latest victory over Oracle Team USA.

The ornate silver ewer, now 169 years old, is a tangible encyclopaedia of America’s Cup history. Every race ever sailed in the 35 matches of the Cup, since 1851, is recorded on the trophy.

Two extra silver tiers have been added to the bottom of the Cup – in 1958 and 1992 – to allow for more engraving. But thanks to Alinghi’s outsized inscriptions, there’s no more space to record the nine races of the 2017 America’s Cup.

The RNZYS commodore, Steve Mair, says a few possible solutions have been tossed around. But the most logical would be to re-engrave the entire bottom section, to match the original font on the rest of the Cup.

Out of courtesy, he says, he will contact previous trustees (or winners) of the America’s Cup to ask if they agree with the idea, or would like to suggest an alternative.

“Adding another section would not be sustainable. After a certain period of time, you can’t have it 20 feet tall,” says Mair. The Cup has already grown to 1.1m high and weighs over 14kg. “We have to figure out a way to future-proof it.”