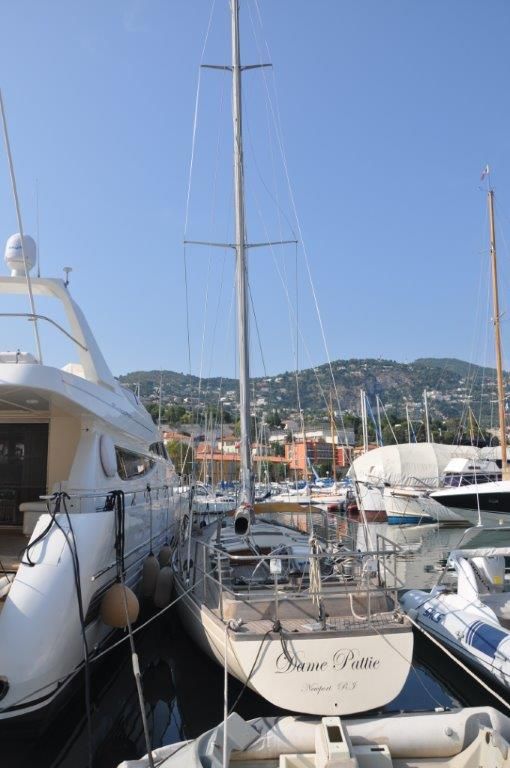 We often get emails from readers that contain interesting information, often about well-known yachts or interesting places for cruising. Here's one from Robert Swan who is a keen member of the Gosford Sailing Club and a former race director of the Gosford to Lord Howe Island Race:

I keep reading the stories about Dame Pattie the great 12m yacht – found her in Villafrance marina (near Nice) in 2013 converted for cruising.

We were unable to get into Nice harbor being already full and our alternate was Villafrance – turned out to be a great venue with the old engraving dock carved out of stone – an ancient citadel over-looking the entrance and some great restaurants nearby.

Just back from a sail through Turkey and the Greek Islands – hot with a good meltemi blowing!

Here's the basic information on the yacht, compiled by that on-line source of sometimes dodgy information, Wikipedia:

Dame Pattie is an International 12-metre class racing yacht built for the America's Cup challenge series in 1967. She was designed by Warwick Hood and built by W.H. Barnett in New South Wales, Australia.

The 1967 challenge cost $2 million and was funded by an Australian syndicate headed by Emile Christenson and represented the Royal Sydney Yacht Squadron. Sir Frank Packer had unsuccessfully challenged in the 1962 series with Gretel. Dame Pattie lost against the revolutionary American defender Intrepid which won the series 4-0.

The series included a furore when Intrepid and Dame Pattie collided shortly after the start of the second race. Dame Pattie went on to cross the finish line first, but was disqualified because of the collision. Intrepid was declared the race winner.

The yacht was named after Lady Menzies, the wife of the former Australian Prime Minister, Sir Robert Menzies.

The yacht's main frames are laminated Queensland Maple, intermediate frames are steambent Danish Ash, to which edgegrain Douglas Fir planking is fastened with silicon bronze screws. Due to the restrictions on use of equipment and materials sourced from outside the defenders country, the Australian syndicate had to obtain permission from the New York Yacht Club to buy the edge grain fir from Stone Brothers Logging, Maple Bay, Vancouver Island, British Columbia.

Dame Pattie subsequently underwent a major refit which included a full reconstruction below decks to provide cabins, galley etc. required for cruising. She was for some years used for private charters out of Vancouver Island.

In 2008 Dame Pattie was purchased by the Danish architect, Mads Buhl, who brought the Yacht to the French Riviera, where she is still sailing as well as being prepared for future participation in regattas within the Classic 12MR fleet.

If you have any interesting reminiscences or stories about this beautiful yacht, feel free to share them in the Comments section below.