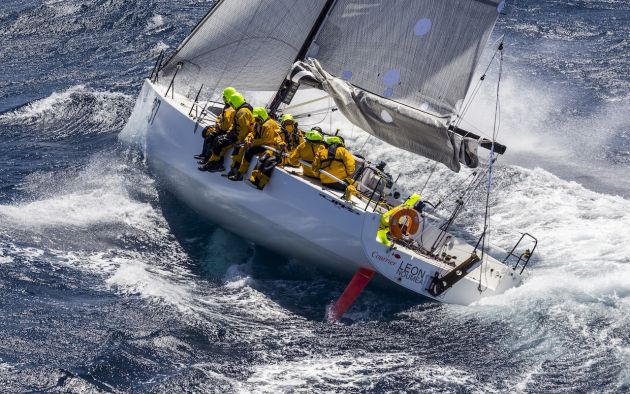 With the giant American super maxi Comanche looking certain to carry off the line honours trophy in the 2015 Rolex Sydney Hobart, second-placed Rambler may yet live to console herself with the biggest prize of all: the Tattersall’s Cup for the outright winner, the one that performs best according to its size.

Throughout the morning the smallest boats, way back on the other side of Bass Strait, have led the Cruising Yacht Club of Australia’s race overall, with Rambler the only big boat currently in the top 10.

King Billy, a pretty 23 year-old timber 38-footer, has led the fleet for much of the morning, exchanging places as the lead ebbed and flowed with Quikpoint Azzurro, the smallest boat in the fleet, and Courrier Leon, the French 35-footer that won this year’s Rolex Fastnet Race in the UK.

This has been a delicious time, when the stragglers were outshining the 80 and 100-foot aristocrats.

King Billy is owned by Philip Bennett, in his 70s, and doing his second Sydney Hobart. And most likely his last, he says. Also on board is King Billy’s builder, Andrew Hay, who was given firm instructions to make the boat strong enough to take anything. Clearly he did.

Shane Kearns had to use his credit card to buy Quikpoint Azzurro so that he could meticulously restore the bedraggled S&S 34 to pristine racing shape.

But as the winds have softened in the north of the strait, so have the prospects of the smaller boats.

For the past two hours, Rambler has steadily climbed the handicap ladder and now sits at second place, behind Enchantress, the little home-built cedar Muirhead 11 from South Australia, sailed gamely by John Willoughby.

And the forecast, at this stage, isn’t looking good for the littlies either. There is a distinct absence of breeze predicted for Bass Strait tomorrow, precisely when the back-markers need it.

To add to their woes, wind is forecast for the usually nocturnally placid Derwent River tonight, about the time that Rambler is expected to arrive. It may be all over the place but there will be breeze.

It is more than likely that Rambler will tie up in Hobart tonight as the boat to beat for the Tattersall’s Cup, and beating her, with this forecast, is going to be a real challenge.

Check the tracker for the latest predicted arrival times and handicap situation: http://www.rolexsydneyhobart.com/standings/?raceId=105&categoryId=460&raceTime=