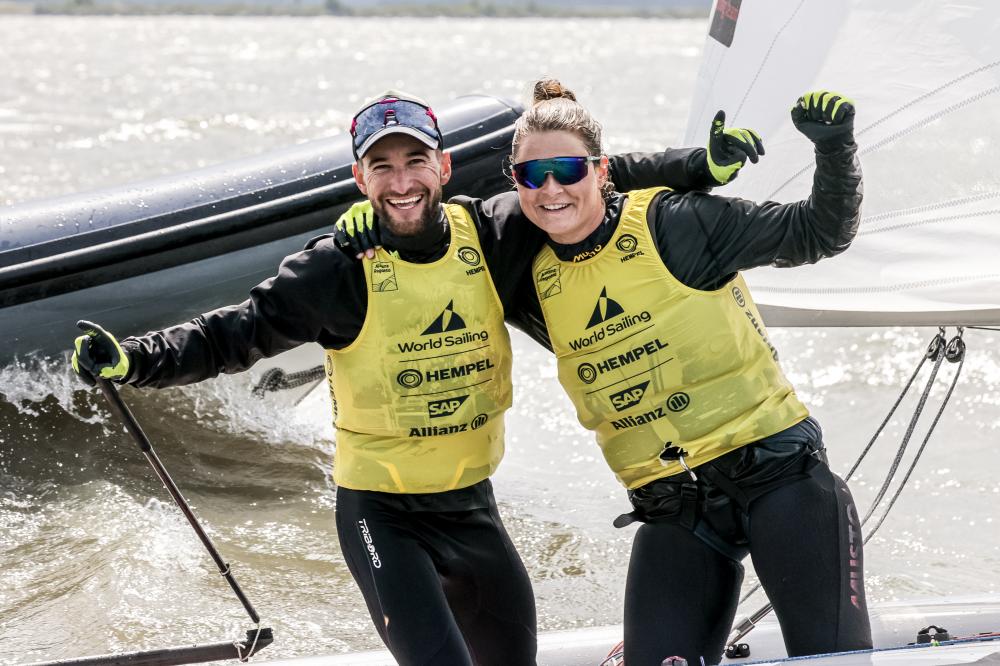 Almere, Netherlands: Five Olympic classes contested their Medal Races at the Allianz Regatta, the 10-boat, double-points decider that often shakes up the podium on the final day of competition and that occurred in some cases.

While 49er Gold had already been secured a day early, the other four events were still up for grabs. There was even some pre-start duelling in the ILCA 6 fleet with Greece pulling out all the stops to defend gold from the reigning world champion from Belgium.

ILCA 6 – Greek Gold
Vasileia Karachaliou (GRE) left nothing to chance in her bid to retain the top spot. She engaged her rival Emma Plasschaert (BEL) in an aggressive match race before the start, but an individual recall flag went up on the race committee boat. Someone was over the line, but who?

Not prepared to take the risk of a non-finish, Karachaliou turned back, followed swiftly by Plasschaert. This played perfectly into the hands of the Greek sailor, who maintained control of Belgium all the way around the race course, the two gold-medal contenders sitting in ninth and 10th for most of the two laps.

Meanwhile, a battle was raging between Mara Stransky (AUS) and Anna Munch (DEN) for the final podium place. At one point, Stransky even climbed into the silver medal position ahead of Plasschaert.

Down the final run though, it was Munch who screamed into podium contention after finding an extra burst of surfing speed to claim the bronze medal for Denmark. Silver to Plasschaert and gold to Karachaliou, and a mutual congratulations between the two leading contenders despite the aggression and intensity of the duel.

“It was nothing personal,” Karachaliou said. “I could have gone out to just sail a good race, but this was an opportunity to practice a different kind of Medal Race, one that we might have to face at the Olympics. I’m happy with how the race went, although going back at the start was not in my plans! To win a World Cup gold medal means a lot.”

Nacra 17 – Flying Dutch
Laila van der Meer and Bjarne Bouwer (NED) won the pin end of the line, enabling the Dutch to put their bows down and launch their foiling catamaran hard into the left-hand corner of the course.

Joao Siemsen and Marina Arndt (BRA) took the Silver, while two Austrian teams were tied for points. For finishing ahead of their team mates in the Medal Race, Laura Farese and Matthäus Zöchling (AUT) secured the final podium place in front of Lukas Haberl and Tanja Frank (AUT) who had led the regatta earlier in the week.

470 Mixed – Swiss win
Going into the Medal Race it was Switzerland holding the top two places. Yves Mermod and Maja Siegenthaler (SUI) started the day in the top position and didn’t put a foot wrong, securing the gold medal with third place in the Medal Race.

It didn’t go so well for Linda Fahrni and Cyril Schüpbach (SUI) who struggled to get in contention, leaving the door open for others to attack. Chris Charlwood and Amelia Catt (AUS) won the Medal Race and won the silver medal.

Keiju Okada and Miho Yoshioka (JPN) started outside the medals, but improved from sixth at the first mark to second by the finish, lifting the Japanese crew to Bronze.

49erFX – Dutch win
The Netherlands might have dominated Belgium 4-1 in the Nations League football match the night before, but it didn’t come so easy for the Dutch 49erFX world champions this afternoon in Almere.

Such is their world and Olympic medal-winning pedigree, Odile van Aanholt and Annette Duetz (NED) were hot favourites to win Gold at this event. However, Isaura Maenholt and Anouk Geurts (BEL) had revealed their giant-killing intentions the day before with two race wins and it was the Belgians that shot out of the start to take an early lead.

Olivia Price and Evie Haseldine (AUS) were also in the hunt for the medals and in the early stages of the race there was little to separate the top three boats on the virtual leaderboard.

As Belgium rounded in first, Australia second and The Netherlands in third, this put Maenholt and Geurts in the gold medal position. Forced to try something different, on the second windward leg the Dutch broke to the right, away from their rivals who had gone left.

At the next cross, van Aanholt squeaked past Australia, just enough to get into Gold. Down the final run, van Aanholt and Duetz let rip and closed the gap to the Belgians. At the finish there was little more than a boat length between them, with Belgium taking the race win but The Netherlands taking Gold. Silver for Belgium, Bronze for Australia.

49er – Another Dutch win
Dutch 49er sailors Bart Lambriex and Floris van der Werken (NED) had already secured Gold a day earlier so their participation in the Medal Race was a formality. However, the race for Silver and Bronze was up for grabs among five other teams.

Already in the silver medal position, Robert Dickson and Seán Waddilove (IRL) put the hammer down at the start and led all the way to the finish. The battle for Bronze swung this way then another as four different crews moved into podium contention throughout the two-lap contest.

However, at the finish it was Benjamin Bildstein and David Hussl (AUT), who hauled their way to second across the line behind the Irish. By a single point, the Austrians had bagged the bronze medal and relegated Lucas Rual and Emile Amoros (FRA) to fourth place.

RS Aero – Britain stops another Dutch win
RS Aero – Noah Rees (GBR) saved the best for last, winning the final race of the series and displacing Shivam Ramdas (NED) from the top of the podium. Ramdas was second with Juliane Barthel (GER) in third.

The forecast is looking thundery for Sunday local time, when four Medal Series finals are due to be contested in the board fleets. The scheduled start is for 1100 hours local time, although there’s the prospect of an earlier-than-scheduled start time to avoid the worst of the predicted storms.