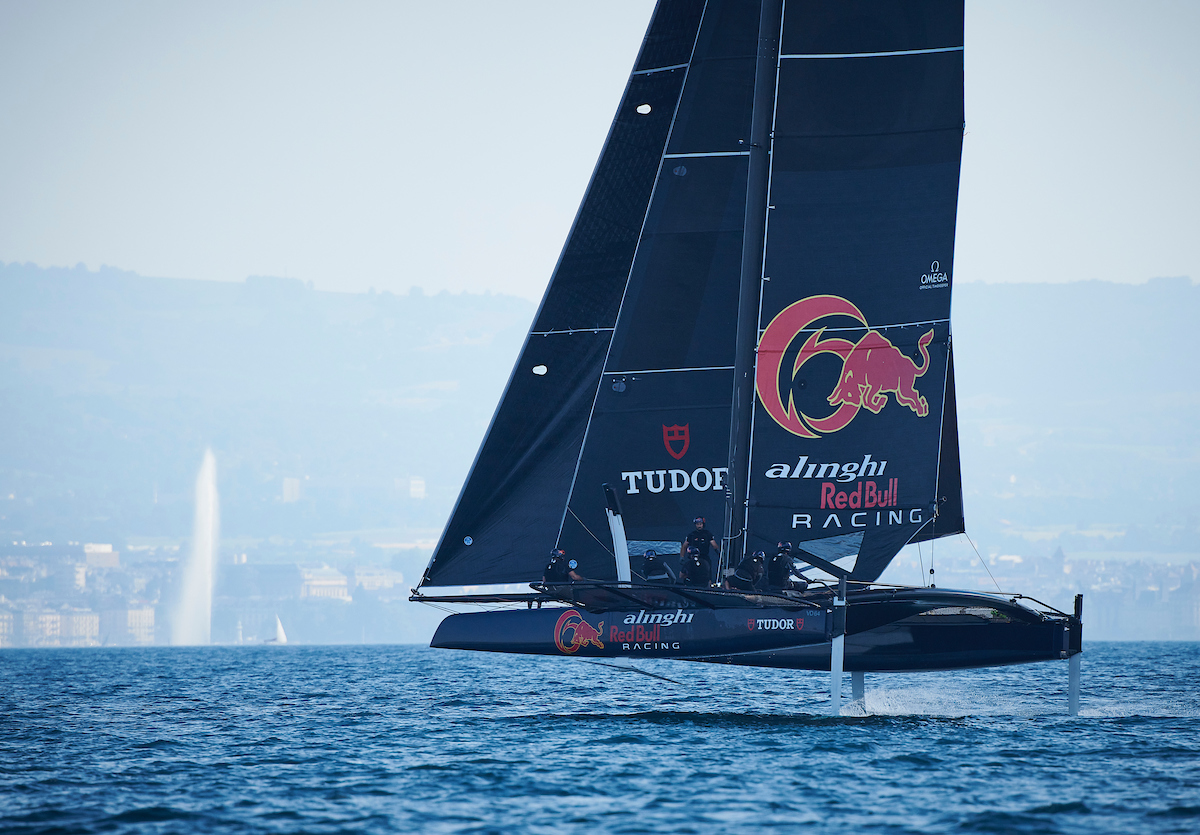 Switzerland: Local boat Alinghi Red Bull Racing won the Genève-Rolle-Genève in 3 hours 2 minutes, after fighting hard to stay ahead of old rivals, Realteam for Léman hope and Spindrift on a perfect day of racing on Lake Geneva.

The long-distance race started lightly under brilliant sunshine with the fleet of 220 boats drifting over the start line in three knots of breeze.

Of the TF35s, Spindrift had the best start and took an early lead, in contrast, form team Alinghi Red Bull Racing struggled: “We got a little covered, so we weren’t in a better position for the start of the race,” explained Arnaud Psarofaghis.

“Just after the start, Nico (Charbonnier) managed to find us a good line to successfully cross the fleet of multihulls and monohulls and reach the French coast at Collonge-Bellerive, which put us in the leading group.”

By the first cross on the approach to Versoix, Realteam for Léman hope had taken the lead from Spindrift, with Alinghi Red Bull Racing chasing meters off their stern.

As forecast, good winds began to pick up for the afternoon and the TF35s, specifically designed to fly in ultra-light winds, were on their foils by Coppet as the breeze picked up to 7 knots. Still, all seven TF35s remained compact, and the competition tight, as the fleet followed the pressure beating up the righthand side of the lake.

Realteam lost her grip on the lead momentarily as they left the Petit Lac with Spindrift ahead for one cross and then Alinghi ahead in the next, but skipper Jérôme Clerc quickly pulled it back before either of his rivals could get away.

In a lull in the wind, the lake became oily smooth on the approach to the Rolle turning mark. Realteam for Léman hope were the first of the fleet to ghost in, followed in quick succession by second-placed Alinghi Red Bull Racing and Spindrift in third.

Of the chasing pack, only a few boat lengths behind, Ylliam XII – Comptoir Immobilier and Vitamina sailing rounded the turning mark in fourth and fifth respectively, with Team Sailfever and Zen Too bow to stern after that.

Having led at the halfway point, Realteam for Léman hope lost their advantage on the approach to Nyon.

Mainsail trimmer Francois Morvan explained: “We had a little speed deficit, and when we got to Yvoire we didn’t come out fast enough. We didn’t have enough of a lead to set off with the Séchard, and we were overtaken downwind by Alinghi and Spindrift, who arrived strong and left with more pressure.”

The fleet was on foils for the entire downwind leg back to Geneva, hitting 28 knots of boat speed in 12 knots of breeze approaching the finish line.

“We had a beautiful long downwind at 25-28 knots of boat speed. It was a great day for the team, we had heaps of fun, and we are improving every time we go sailing,” a beaming Pierluigi De Felice said as Vitamina Sailing came ashore.

“I have done several Genève-Rolle, but today is easily the most beautiful race in terms of conditions,” Morvan added.

Enjoying the tight competition, Spindrift’s Xavier Revil said: “Downwind, we thought it would be difficult to overtake because we knew that we were going towards more wind all the time, which means that the first will be better served.

“We managed to make a shift on Realteam and take the inside of the turn. This allowed us to go ahead and finish the day second, so we are thrilled. It was nice to sail in these conditions and to do a fast Genève-Rolle-Genève.”

Holding a faster pace downwind new Italian team, Vitamina Sailing, led the chasing pack across the finish line in fourth with Team Sailfever in fifth, Zen Too in sixth and Ylliam XII – Comptoir Immobilier in seventh.

Tomorrow regular fleet racing will resume for the TF35 Mies Grand Prix, with the first warning signal planned for 11.30 CET.