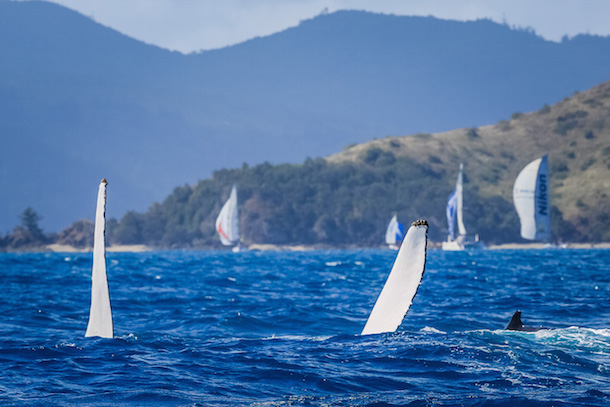 With one more day of racing the jockeying for the podium spots at Audi Hamilton Island Race Week was in full swing today, August 21, 2015. In one or two of the divisions the leaders still have some wriggle room should they post a sub-par performance tomorrow, but for most it’s still game-on for the top three spots.

In the Racer Cruiser division Tony Walton’s Hartbreaker from the Royal Brighton Yacht Club in Victoria is holding first place by just one point. The Racer Cruisers sailed two windward/leewards today and the Reichel Pugh 46 started the morning with a disastrous last place, before dramatically turning their fortunes around and taking the gun in race two.

“The poor old crew were a tired and sorry lot this morning,” said Tony “but they finally seemed to wake up after race one and really turned it on for the second. Actually, this is all part of our strategy to keep the opposition off-guard; they’re now wondering whether we’re a bunch of amateurs or a thoroughly professional crew. So we’re going to look closely at our opposition for tomorrow and work out how to snuff them out!”

David Pascoe’s Seawafer has a five point lead in Cruising Division 3, despite a bad day at the office today with a 13th position. Roger Johnston’s Engarde and Jim Watson’s Windsong of Mornington share second place. But only three points separate second and ninth place, so there will be plenty to play for in this division tomorrow.

John Brand’s beautifully restored Star Ferry has an impressive seven point lead in the thirty boat Non Spinnaker division, ahead of Peter Edward’s Lafayette and Mike Walter’s Mim. Star Ferry is hoping to drop their 17th place in race four as their discard.

After yesterday’s dramas in the Racing Multihulls it was great to see the Stransky team back out on the water racing their rapidly patched-up Fantasia and turning their fortunes around with a second place. Wayne Bloomer’s ChillPill took the gun and holds second place overall behind Chris Williams’ Morticia and ahead of Peter Wilcox’s Mojo.

In the inaugural Trailables division David Barker’s Halcyon holds a commanding six point lead but remarkably will not be in a position to defend it tomorrow. “I’m hoping we’ve got enough in the bag to hold on to top spot, because we have to pull the pin today. My two crew are flying back to Victoria tomorrow morning, so we’ll be nervously waiting to check out the results on line tomorrow afternoon.”

David Davenport hails from Western Australia but keeps his boat Sea Mist on the East Coast so he can enjoy the winters in warmer climates. “Our boat’s a bit nomadic but we’ve never raced it before; so we’re really pleased to be holding top spot in the Multihull Cruising, division” said David, adding that his plans post Race Week include taking his UK-based mother and sister cruising. “My Dad used to get very seasick, so we didn’t sail much when he was alive. When I asked my mother recently if she wanted to come sailing she said, ‘when’s the next plane?’”