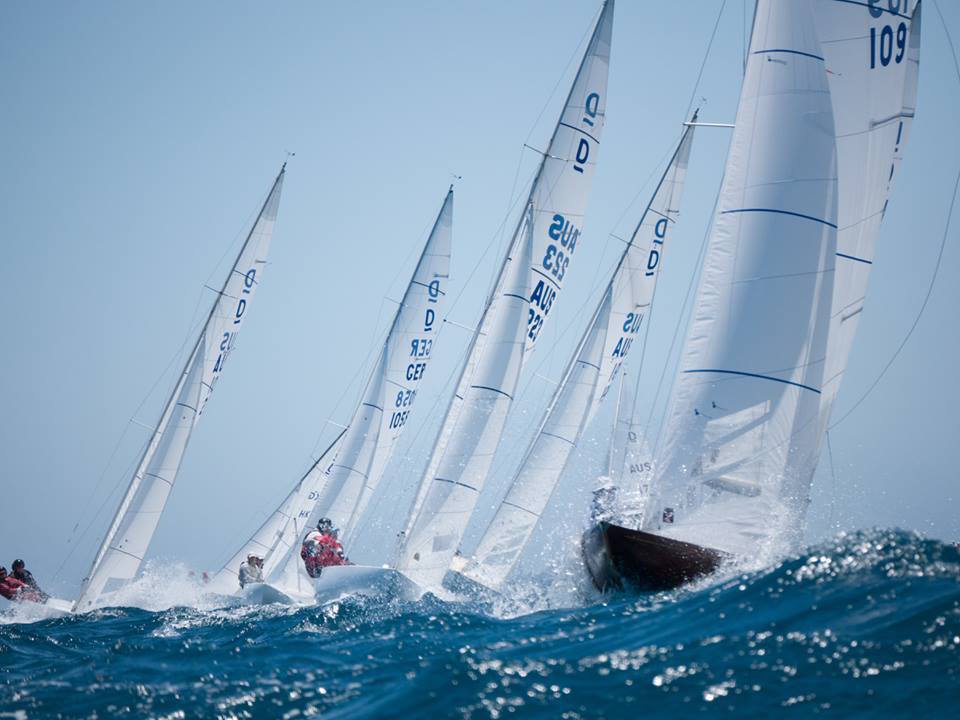 The 2019 Dragon World Championship takes place from Friday 4th to Wednesday 9th January inclusive. The championship is organised by host club the Royal Freshwater Bay Yacht Club and sailed out of Fremantle Sailing Club on the pristine waters of Fremantle in Western Australia.

The race course area is similar to the race track where the Americas Cup took place back in 1987 and the 2011 Perth Olympic Classes World Championship was sailed. Fremantle is renowned for cloudless blue skies, aquamarine waters and the infamous ‘Fremantle Doctor’ (the SW see breeze that regularly blows in the afternoons at this time of year).

A compact but very talented and competitive fleet of 35 dragons have assembled on the quayside which include 15 internationals who have made the long journey down-under from Europe.

The current world champions Provezza sailed by Andy Beadsworth, Ali Tezdiker and Simon Fry, representing Turkey, were one of the first boats to arrive in Fremantle over a month ago and have set the pace ever since. They have just won the Prince Philip Cup (winners of the Australasian Championships) which came to a conclusion yesterday.

Hot on their heels are Dragons representing Russia. Anatoly Loginov is sailing Annapurna with his crew Vadim Statsenko and Alexander Shalagin. Anatoly finished third at the PPC, the unofficial warm up regatta for the Fremantle Worlds. He was 2nd at the Cascais Worlds in 2017, 4th at the Dragon Gold Cup 2018 in Heldsinki, 8th at the Worlds in La Rochelle in 2015 and 15th at Weymouth in 2013, 9th in Melbourne and 4th in Medemblik so is sure to be challenging for the podium in Fremantle.

Willy Packer sailing Scoundrel with Julian Harding and Jock Packer carries the weight of the tab, local favourite. Willy and his team are host club Royal Freshwater Bay YC hot shots. The Scoundrels were a close second at the PPC here off Fremantle and are another team who have been training hard on the ocean for the Worlds. He is a former Corinthian world champion, was 3rd at the Worlds back in 1995 here in Fremantle, 8th in Melbourne in 2011 and 7th in La Rochelle in 2015. He also has many Australian National Championship titles to his name. Willy and his team will also be the main challengers for the Corinthian title again in Fremantle this summer. Look out for the distinctive multi colour spinnaker of the Scoundrels.

Another team with local WA sailing legend status is Peter Gilmour sailing YRed with crew Yasuhiro Yaji and Sam Gilmour. Peter Gilmour and his Yanmar Racing Team have only begun racing in the Dragon class earlier this season but have arrived here in Fremantle some weeks ago to tune up against the current world champions and are already strong on the pace.

Two of the best of British boats here in Fremantle come in the shape of Klaus Diederichs sailing Fever with regular crew Jamie Lea and guest Olympic sailor Diego Negri and Grant Gordon sailing Louise Racing four up with Ruairidh Scott, Sophie Weguelin and James Williamson. Both GBR boats arrived a bit late to complete all the PPC races but performed very well in the later races of the series. Klaus has won the 2015 Dragon Worlds at Weymouth with current world champion, Andy Beadsworth as crew. He finished in a credible 12th at 2017 Cascais Dragon Worlds.

Grant is sailing with a new crew combination of four sailors at this world championship. His crew work has been sharp and with the experience of his long term crew member Ruairidh, Louise Racing should not be underestimated. Grant was 9th at the 2017 Dragon Worlds in Cascais and 11th in La Rochelle in 2015.

The Dutch come to Fremantle with two very quick entrants. The Dutch girls onboard Olinghi have been turning heads in more ways than one downunder. Charlotte ten Wolde is skipper with sister, Juliette, Janka Holan and Pedro Andrade filling in as middle man. The effervescent Dutch crew scored double race wins on the final day of the Prince Philip Cup and come into the Worlds in fine form.

Also representing the Netherlands is a very experienced team with Pieter Heerema at the helm, joined by regular Dragon campaigners Lars Hendriksen and George Leonchuk. Although Pieter was one of the last boats to arrive in Fremantle he comes with a very good Dragon pedigree. Pieter was 2nd at the 2018 Dragon Gold Cup in Helsinki, 6th at the 2017 Dragon Worlds Cascais and 4th at the 2017 Dragon Gold Cup in St Tropez.

A multiple winner of the Prince Philip Cup is Nick Rogers from Tasmania. He is sailing Karabos lX with crew Leigh Behrens and Simon Burrows. He has been sailing Dragons for many years. He won the world title when the regatta was last held on the waters of Fremantle back in 1995 and also scored a 2nd place at the Dragon Worlds in 2003 in Hobart, Tasmania, his home sailing grounds.

There is a strong fleet representing the host club the Royal Freshwater Bay YC with 15 boats on the starting line. The entire fleet are entered as Corinthian sailors and they will all be trying very hard to get in amongst the internationals.

There are 10 races scheduled over the 6 days of competition so sailors will be fully tested by the local Fremantle conditions. The first day of racing has an early start time of 0930am due to a strong wind forecast later in the day.