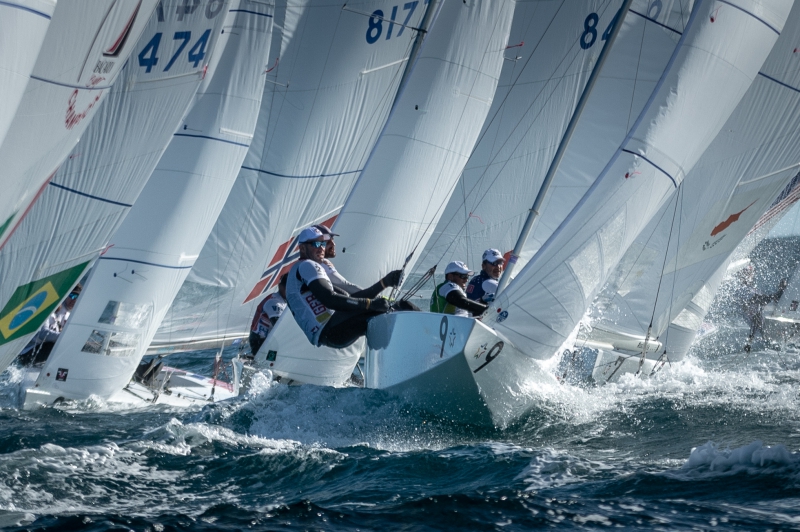 Porto Cervo, Italy. 16 June 2019. At the conclusion of a week of inspections and registrations, racing in the 97th edition of the Star World Championship will begin tomorrow, Monday 17 June. The event was last held in Porto Cervo exactly thirty years ago. Organised by the Yacht Club Costa Smeralda in collaboration with the International Star Class Yacht Racing Association (ISCRYA), the regatta is supported by Main Partner Audi and Technical Partners Quantum Sails and Garmin Marine.

Taking centre stage will be a fleet of 65 teams hailing from 20 nations, including healthy contingents from Italy, the USA, Switzerland and Germany. The double-handed crews will compete in fleet regattas on the race course off Porto Cervo aboard the timeless keelboats designed in 1911 by Francis Sweisguth, a popular Olympic class up until London 2012. In order for the World Championship to be valid at least six races will need to be complete, with a single round the buoys race scheduled each day, covering a total distance of approximately 10 nautical miles. Should weather conditions prevent the smooth running of all races, a maximum of two races can be held per day to recover any cancelled racing, and competition can also be extended to 24 and 25 June.

Eight of the participating teams are former Star World Championship winners. They include two Italian crews: Roberto Benamati, winner with Marco Salani in 1991 and competing in Porto Cervo with Alberto Ambrosini, and Enrico Chieffi, World Champion in 1996 with Roberto Sinibaldi, sailing here with Manlio Corsi: a duo that has just clinched the Italian title. The remaining four past champions are American, including Paul Cayard, who won in Buenos Aires in 1988, and Eric Doyle, winner of the title in Punta Ala in the late 90s, who comes to Porto Cervo as the holder of the prestigious Bacardi Cup along with his bowman Payson Infelise. Norwegian Eivind Melleby, who claimed the 2017 World title in Denmark, will also be competing.

In addition to the skippers, who have the honour of adding the Gold Star to their mainsail, several world champion bowmen are also taking part. These include Frithjof Kleen (Malcesine, 2014), Josh Revkin (Troense, Denmark, 2017), the reigning champion Guilherme del Almeida and two Olympic medallists: Anders Ekstrom, winner of the title in 2004 in Gaeta (Italy) and bronze in Beijing with Freddy Lööf (here with Sweden's Tom Lofsted), and Bruno Prada, a silver medal winner in China, bronze in London and four-time Star World Champion, three of which with Brazilian Robert Scheidt, and most recently with Augie Diaz.

On the bow in Porto Cervo with American Augie Diaz will be Brazilian Henry Boening, the reigning European champion fresh from taking the title in Riva del Garda; while the Italian couple Diego Negri and Sergio Lambertenghi, who came close to victory twice in the last five years, are back together.

The Commodore of the Yacht Club Costa Smeralda, Riccardo Bonadeo, commented: “We are proud, thirty years on, to host the Star class, which is part of the fabric of sailing. Given the sporting prowess of the sailors taking part in this event, I am sure these will be exciting and action-packed days. I invite all the competitors who love this sport and consequently the sea, to sign the Charta Smeralda, the ethical code of the One Ocean Foundation which provides guidelines positive behaviour to safeguard the sea. Special thanks must go to Paul Cayard, who offered to act as an Ambassador for the One Ocean Foundation on its creation in 2018. I wish all the sailors, including some of our YCCS members, fair winds.”

As part of the YCCS initiatives to promote a culture of environmental sustainability, all the teams were given free metal water bottles, which they can fill for free with chilled water from a dispenser located below the Piazza Azzurra available to all.

This evening, once the Competitors' Meeting has been concluded, the Welcome Cocktail at the YCCS Clubhouse will officially open the event. Tomorrow morning the crews will gather at 9:00 a.m. in Piazza Azzurra for the daily Weather Briefing by Quantum Sails and the first warning signal is scheduled for 12 midday, with forecasts of 7 – 10 knots of westerly breeze.