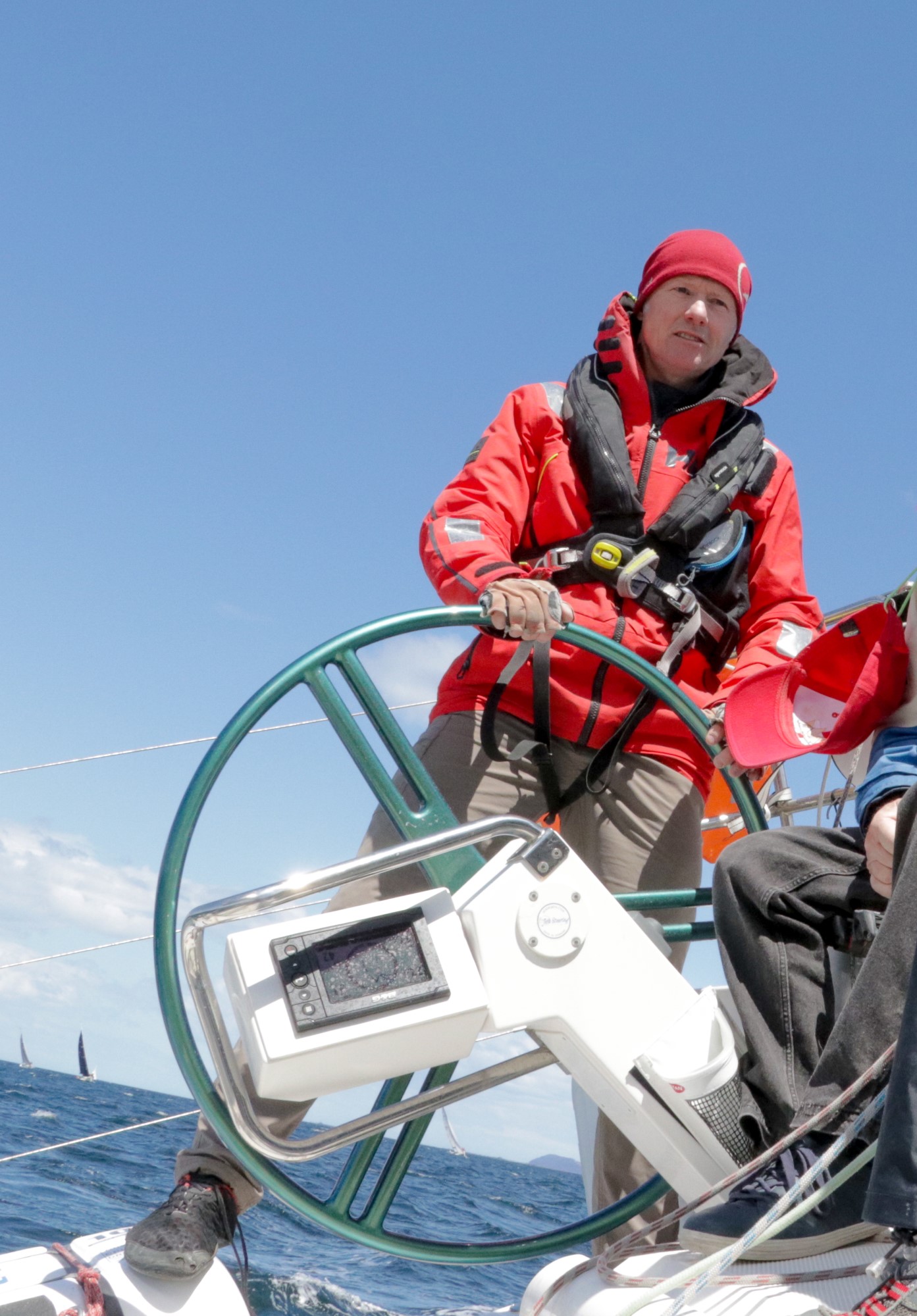 Professor Ian Snape and his co-owner Gary Kuehn bought their 10.6m Elan S4, Frontline, in 2016 and will be on the start line of this year’s Riversdale Estate Wines Launceston to Hobart (L2H) race; Tasmania’s longest offshore race.

Offshore racing can challenge even the hardiest sailors. But what motivates two outdoor adventurers used to climbing and skiing in rugged terrain to leave land for offshore sailing?

Snape and Kuehn had minimal sailing experience, but have taken to sailing like ducks to water.

“The thing about yacht racing is it’s really hard to master, and sailing is infinitely complex. We had no idea three years ago, so thought it would be fun to learn together,” Snape said.

“Our approach prioritises safety, risk management, co-learning and choosing a crew that we simply like hanging out with.”

Snape, originally from the UK, developed his 25-year professional and academic career in environmental science, leading and managing research teams in the Arctic and Antarctic for government and private agencies.

His ‘second career’ is as co-CEO of Frontline Mind and Professorial Fellow at the University of Melbourne. It has centred on developing the Frontline Mind program to train Olympic athletes, business CEOs, defence force and law enforcement agencies and other frontline services in Australia, the US and the UK.

Central to this approach is building human performance which engages a person’s neurology for enhanced awareness of risk and opportunity, leading to clarity in action and performance under pressure.

Snape kicked off this work through his Risky Business research project. He found and studied people like Kuehn, a skier and mountain guide and now a co-owner of the yacht, to understand how he approached risk in complex environments in which people die if they make mistakes.

“I discovered that while Gary was a meticulous planner, he held plans very loosely. He always did his homework on the weather, was organised and he knew his people, but he took a probe, sense and respond approach,” Snape said.

“Gary taught me the importance of searching for new information, building that into the plan, having the confidence to discard what isn’t working, and remain agile. He also prioritises looking after your people, which is a strong focus of what we do both on and off the water,” said Snape.

Snape, with co-founder and co-CEO of Frontline Mind, Mike Weeks, have developed their expertise working in complex and high-risk environments. They have a close working relationship with the US Marine Corps who they have trained in resilience and performance, water survivability.

Now they will teach them how to combat fatigue in high-pressure situations while enabling effective decision-making.

Frontline’s sailmaker is former national and world champion sailor Paul Eldrid from OneSails Australia. Eldrid has joined the team for three training sessions and has coached the crew in sail trim cycle, the role of the helm, data management and performance coaching.

“While some of our crew are new to sailing, we are lucky to have Gordon Clark and John Rayner onboard,” Snape said. Rayner, an experienced high-performance sailor, taught Snape how to sail on a 34-foot UFO, a classic sailing yacht, and regards the L2H as one of his favourite offshore races.

While the Frontline team will be competing hard, Snape isn’t motivated by a podium finish. “We have prepared ourselves and the boat well. We’re not in the A-League yet, but we are improving,” Snape said.

“Ultimately, it’s my responsibility as skipper to ensure a physical and psychologically safe place on board, a place where the crew can have a go without being criticised for making mistakes, so my focus is always on our team.

The Riversdale Estate Wines L2H 2019 race starts at Beauty Point on Friday 27 December and finishes in Hobart around Sunday 29 December 2019.