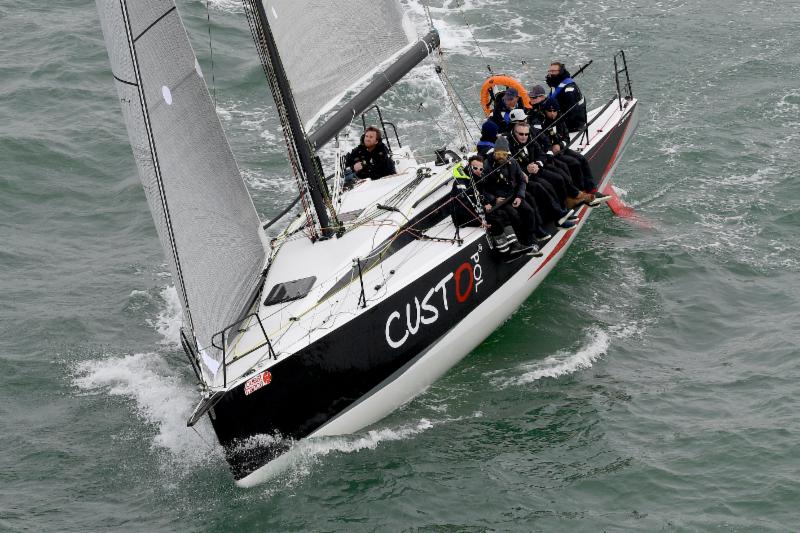 The IRC Europeans in the Solent

28/04/2018
A grand gathering of IRC boats is expected in Cowes mid-June for the first IRC European Championship ever to be held on the Solent. This stretch of water represents the spiritual home of IRC, the rating rule which the Royal Ocean Racing Club runs jointly with its French counterpart, the Union Nationale pour la Course au Large. It is also historically significant – Cowes Week was first held here in 1826 and the first America's Cup (as it would become) in 1851.
The Round the Island Race, today one of the largest participation events in sailing, starts from here as does the RORC's own Rolex Fastnet Race, first held in 1925, and now the world's largest offshore race. Running over 10-16th June, the IRC Europeans, the most prestigious title to win under the RORC/UNCL's rating rule, will mark a new chapter in Solent yacht racing history.
British and French boats are traditionally strongest competitors under IRC: A British boat has won the RORC Seasons Point Championship for the last two years, but in 2015 France owned the entire podium. French boats have won the last three Rolex Fastnet Races and are the present holders of the Commodores' Cup, which a British team last won in 2012.
There will be no let-up in Anglo-French competition this season with both sides campaigning examples of IRC's hottest new boat: The 1180 comes from JPK Composites, who's 1080 won the 2015 Rolex Fastnet Race, while their 1010 claimed it in 2013 – both campaigned by top French crews. Another Jacques Valer design, the 1180 has more volume forward and a more pronounced chine.
Campaigning JPK 1180 #1 is French legend Géry Trentesaux, the 2015 Fastnet winner who led the French Commodores' Cup team to victory in 2006. His Courrier Recommande finished second to a runaway TP52 in her first outing at Spi Ouest-France over Easter. The IRC Europeans will be one of her first major events: “I like to sail in Cowes and I am a member of the RORC, so it is a good idea to come and race against all my English friends,” says Trentesaux.
The IRC Europeans schedule follows the same well-refined format as the Commodores' Cup with eight inshore races (windward-leewards, round the cans, some reaching starts), an Around the Isle of Wight (1.5x coefficient) and a 150 mile/30-36 hour offshore (2x coefficient). “The offshore races are not so big,” says Trentesaux. “And Cowes in June is wonderful – I am very happy to come back. But we have a new boat. At present she is okay in strong and light weather, but not in medium downwind – we don't have enough spinnaker area. Otherwise she is very nice.”
Also campaigning a JPK 1180 at the IRC Europeans is Britain's Tom Kneen. “It will be a really interesting week between Sunrise and Courier, but they will have some more weeks training than us,” he says.
Compared to the wily veteran Trentesaux, Kneen is much newer to sailing having only acquired his first boat four years ago. Since then he has been enthusiastically campaigning his boats, which, like Trentesaux, culminated in a JPK 1080.
Kneen acknowledges that winning the IRC Europeans is a big ask. “Four years ago I had no idea that one day winning the IRC Europeans would be an ambition. If we came out on top I would be bouncing off the walls with excitement. If we podium I will be dancing!” Kneen is also gathering a three boat team to compete in the Commodores' Cup, which for the first time is being scored concurrently with the IRC Europeans.
The 2018 IRC Europeans is open to yachts with IRC Endorsed certificates and TCCs of 0.995 up to 1.270. At the grand prix end the line-up includes FAST 40+s like Mike Bartholomew's former GP42 Tokoloshe II and James Neville's HH42 INO XXX and the de Graaf family from the Netherlands on their newly acquired Ker 43 Baraka GP. But the event provides ample opportunity for smaller boats to come out on top – if they are sailed well.
In fact the first two IRC Europeans winners were among the shortest: Paul Gibbons' Quarter Tonner Anchor Challenge won in Cork in 2016 while in Marseille last year Guy Claeys' JPK 10.10 Expresso 2 was crowned IRC European Champion, racing in IRC Four.
Among the lowest rated boats competing this year is Mike Bridges' Elan 37 Elaine. Since Bridges acquired her 13 years ago Elaine has been a regular at the IRC Nationals. The IRC Europeans, he says, is just the next step up. “We were looking for something different to do. This came up and we thought we'd give it a crack. We are not doing any other big regattas this year.”
Elaine is kept in top condition for racing, she's dry-sailed and with the help of North Sails, Bridges has had her converted to a non-overlapping headsail set-up to lower her IRC rating. These days he admits they don't do much racing offshore, but they have all the experience and it isn't daunting for them. However “if there is some breeze, we'll be alright. If it is light and horrible, we'll be at the back of the fleet,” he warns.
The RORC IRC Europeans takes place over 10-16 June 2018 with a race around the Isle of Wight on Monday 11th June and the overnight race over the Wednesday-Thursday, 13-14th June.
James Boyd/Race Reporter