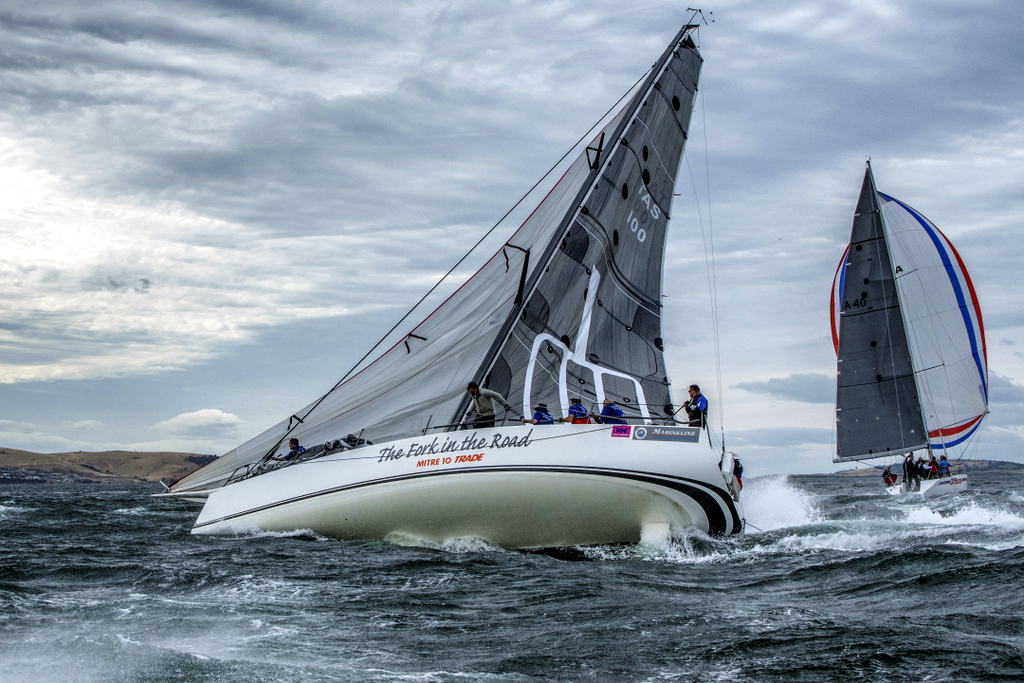 The Fork in the Road was one of several spectacular broaches when 25 knot westerly gust hit the fleet just after the start. Photo Jimmy Emms.

First held by the Royal Yacht Club of Tasmania in 1898, this was the 91st edition, with races missed during the war years.

The New Zealand maxi yacht Konica Minolta set the record of 8 hours 02 minutes and 59 seconds in the 2005 Bruny Island Race.

However, just missing the race record was compensated by excellent results for Alive on handicap, winning both the IRC and PHS categories on corrected time.

“I can see where we could have picked up those 10 minutes or so to break the record,” Duncan Hine said after finishing the long day/night race that started at 9.30am on Saturday. “We got away to great start, carrying our big spinnaker in the strong north-westerly breeze, hitting a boatspeed of 25 knots or more. At the bottom of the Channel near Partridge Island we got some really heavy gusts, 40 knots, before sailing to windward for most of the final 40 nautical miles.”

Alive, which is normally based in Queensland or in South-East Asia where owner Turner lives, has remained in Tasmania following the Sydney Hobart, especially to compete in the Bruny Island Race. On 2 January, Alive won line honours in the iconic King of the Derwent race.

Alive will sail to Sydney shortly to contest the Australian Yachting Championships in March while on the more distant horizons is the Melbourne to Osaka (Japan) double-handed Race in 2018.

Duncan Hine and Phil Turner will handle the 66-footer on the 5,500 nautical mile race.

Alive did not contest the premier AMS category of the Bruny Island race, with victory going to the 32-year-old wooden boat Intrigue, skippered by 81-year-old Hobart yachtsman Don Calvert

The Royal Yacht Club of Tasmania today confirmed Intrigue as the AMS handicap winner of the Bruny Island Race which circumnavigates the elongated island south of Hobart.

In a demanding race for the fleet of 15, winds reached in excess of 40 knots, at others times falling away to near nothing.

Built of Huon pine and other Tasmania’s notable boat-building timers in an apple shed down the Huon, south of Hobart, in 1984, Intrigue has now won a major handicap division of the 89 nautical mile Bruny Island race for a record 11th time since 1985.

Don Calvert has skippered Intrigue in all but two of her 11 wins, his son David skippering her twice. David was among the crew who sailed the boat in this year’s race.

“This was a typical Bruny race…you always get plenty of variety (in sailing conditions),” Don Calvert said yesterday, recalling his wild broach in a 25-knot gust at the start on Saturday morning. “We had flukey conditions in the Channel and winds of 35 knots near the bottom of Bruny when we were vying for second place in fleet with Tilt.”

Line honours winner, and near record-breaker Alive scooped the other two handicap categories in an impressive result by the Reichel Pugh 66 owned by Philip Turner and skippered by Duncan Hine. She was not entered in the AMS category.

In the open PHS category, Alive won outright from Footloose and Tilt.