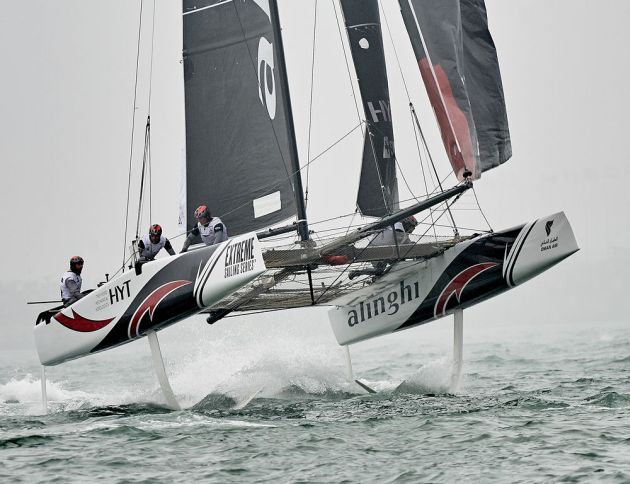 Swiss team Alinghi today notched up their first win of the 2016 Extreme Sailing Series in a breathtaking final day of racing in Qingdao.

Alinghi went into the finale of Act 2 with the narrowest of leads over rivals and Act 1 winners Oman Air, and all to play for as the fleet took to the stadium race course in 8-10 knots of wind, enough for the GC32 catamarans to ‘fly’ on their hydrofoils. The two crews proved the form teams over the first three days of intense racing in Fushan Bay – and when racing resumed, so did their battle.

It was Oman Air, with experienced skipper Morgan Larson on the helm, who scored first, dominating the first race of the closing day to take a vital win while a poor start saw Alinghi only muster a seventh. But Alinghi, under the expert guidance of helmsman Arnaud Psarofaghis, answered straight back, leading off the startline of the second race all the way to the finish to record the first of three race wins. And in a complete reverse of the opener, it was Oman Air’s turn to settle for seventh.

Even a broken jib onboard Oman Air in the fourth race of the day that put them in sixth place couldn’t stop them coming back to win two races later.

With a thick fog descending on the race course Race Director Phil Lawrence decided conditions were not safe to hold the last scheduled race. It meant race 18, the sixth of the day, counted for double points, handing a full 24 to Oman Air, but it was not enough to overtake Alinghi and Larson’s men finished just six points short.

The victory for Alinghi means they move up the overall leaderboard into second, but Oman Air still top the standings by two points going into Act 3 in Cardiff, UK.

“The team did a fantastic job – they made it easy for me to just helm the boat and be fast,” Psarofaghis said. “We had a real battle with Oman Air on points. We had a good race, they had a good one, we had a bad one, so did they. Every race was a new race for us. We looked to get the best start possible not think too much about the points. To get up on the foils was great – we made some good gains while flying. We’re going to push to be even faster in Cardiff.”

Gracious in defeat to his old team Alinghi, Larson vowed to come back stronger when racing resumes in June.

“We put a good effort in but came up a little short,” the American skipper said. “Hats off to Alinghi, they were good all week, but now we’ve got to close that gap. We’re all out there to win but obviously I sailed with Alinghi last year so there’s a little something there pushing me on.

“We tore a jib in the fourth race which really affected us. We dropped from third to seventh and we were really on the back foot but the guys answered and we came back strong. We were looking forward to the last race because we knew we had a shot. But we’re a strong team, we have our act together, and it’s going to be a great season of racing.”

Red Bull Sailing Team skipper Roman Hagara said he was happy to rack up another podium finish that puts his crew in joint second on the overall leaderboard. “Qingdao has not always been the best venue for us – we’ve had some really big issues here with crashes and capsizes,” he said. “Now finally we have a good story from Qingdao, finishing on the podium. Our start in Oman was perfect and now we have another podium, so we’re right up there.”

Early leaders Land Rover BAR Academy finished fourth, with Sail Portugal in fifth and SAP Extreme Sailing Team in sixth. Taylor Canfield’s One team, the first Chinese-backed crew ever to compete in a full season on the Extreme Sailing Series, finished Act 2 in seventh ahead of Team Turx.

Qingdao’s own Liu Xue, better known as Black, said: “It’s been amazing being part of the One crew and representing China here in my home town. Today there was enough wind to get the boats up on their foils, which was an incredible experience.”

Act 3 of the Extreme Sailing Series takes place in Cardiff from June 23-26.