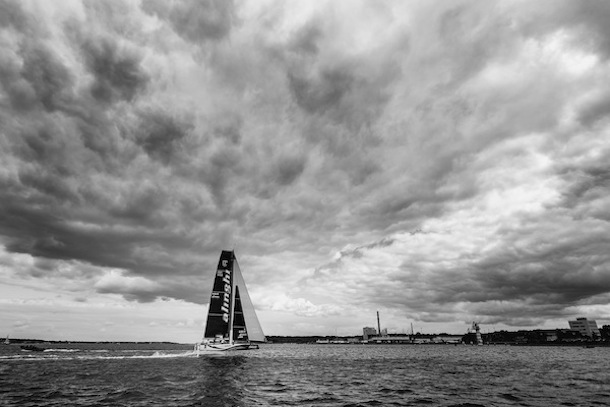 Even Alinghi skipper Morgan Larson could barely comprehend his team’s level of dominance in today’s racing at the Bullitt GC32 Sailing Cup Kiel. Six wins from eight races was unthinkable in such tricky and variable conditions in the narrow confines of the Kieler Fjord.

“It was one of those magical days where we did nearly everything right,” said Larson. “The conditions were hard on all the teams. Even when we weren't doing so good, the guys kept on pushing for every boat length here and there on the race course. We probably had some extra luck with some of the bigger wind shifts, but we also put ourselves in some good spots, and the team’s boathandling was superb in the tight situations.”

Alinghi’s performance was the perfect way to bounce back from their capsize the previous day, from which both crew and boat emerged unscathed. The only two teams to take a race off the Swiss were Team ENGIE winning race four, and Spindrift racing fended off Alinghi in the 8th and final race of a very long day on the water. Although there is no doubt who tops the leaderboard in Kiel, the points are very tight between 2nd and 4th place.

Yann Guichard’s victory in race eight puts Spindrift just a point in front of Sultanate of Oman, with Team ENGIE 4 points further back. “It was good for our team spirit to win the last race, it was a tricky day for everybody,” said Spindrift’s skipper. “The race course is small, narrow, and very challenging, especially with the GC32. I did a few bad starts earlier on, but then we started to race well. For sure we are a better team at the end of the day than we were at the beginning.”

Racing on such short courses in such fast boats is a steep learning curve for everyone here, but none more so than for offshore racer Seb Rogues helming Team ENGIE. “We were very pleased to win a race today. The starts are difficult for me. I'm used to racing for 25 days, not just for 15 minutes! But I am here in the GC32 to learn. It's perfect for me, to learn how to sail and race multihulls for the first time. We are pushing ourselves out of our comfort zone, and we are enjoying it.”

The forecast for Saturday is much lighter, so there may not be many opportunities to wow the crowds with the hydrofoiling of today. Guichard believes light winds will make the field more open. “It will be harder for one boat to dominate,” he said. The regatta leader was the first to agree with Guichard’s assessment. “Light winds have been one of our weaknesses at past events,” said Larson. “We've watched video of some of the good teams in the light airs, like ARMIN STROM and Sultanate of Oman, and hopefully it will be our turn to be fast in the light tomorrow!”

Saturday's racing for the Bullitt GC32 Sailing Cup Kiel is scheduled for a 11am (local time) start.