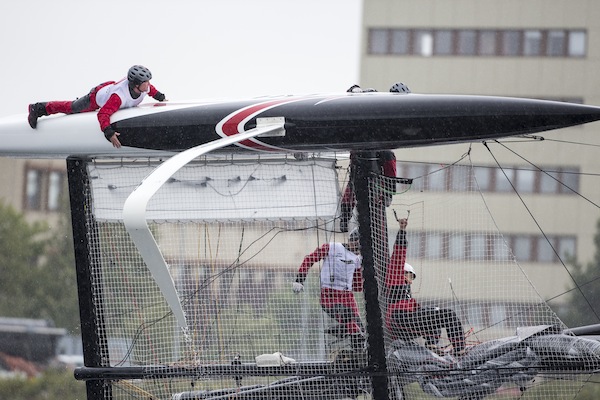 There was a sense of anticipation about day 1 of the Bullitt GC32 Sailing Cup Kiel. The Kieler Fjord is the narrowest race course that the fleet of high-speed GC32s has yet encountered, so the five teams were keen to use the morning’s media sailing session to get the measure of the racing area and the weather conditions.

All five crews went out with their media and VIP guests, including Ulf Kämpfer, the Lord Mayor of Kiel who stepped on board with Alinghi for an exhilarating sail. Next on board Alinghi was journalist for Swiss Yachting, Harry Schack who got more than he bargained for when the Swiss 32-footer was caught out by a sudden massive gust on the eastern side of the Fjord close to the concrete harbour wall.

As the 35-knot gust hit the boat at just the wrong time, skipper Morgan Larson found himself in a dilemma. “It was a little bit challenging to read the gusts because the big ones that looked big on the water weren't that big, and the ones that looked small were quite strong,” said Larson. “But we were stable, foiling nicely, practising a few foiling gybes. We were on starboard headed on over to the rocks [on the east side of the inner Kieler Fjord] and we were timing a gybe. We had a rib to our left, so we stretched a little further and then we had a channel marker, so I told the guys we'd go just past the channel marker and as we went for the gybe the gust got pretty big.

“The wind was a little bit lifted and it felt like were going to come out of the gybe not quite clearing the lighthouse so I just said ‘Cancel!' and made the right-hand turn. But the port foil was already in a negative mode so as I turned it just dug the new leeward bow down and it flipped over. Our sails were pretty firm through the gybe, and the crew had started doing the mechanics of the gybe and were not ready to let the sails go. But that said, it was a 35-knot puff, so the capsize was always going to happen even if we had let the sails out. It all happened pretty fast.”

The boat turned most of the way upside down and the mast touched the bottom. But on bringing the boat upright, the crew were relieved to discover that the damage had been minimal. There were no injuries, and the guest journalist Harry Schack was quick enough to work his way around the trampoline during the capsize and got nothing more than his feet wet. “We were lucky,” said Larson. “We could have totalled the boat on the rocks. Great team work to get the boat away from the rocks and get it upright. Apart from a broken mast wand and a bit of mud on the top, everything's good. There was a risk the whole time of breaking the mast, but the water was just deep enough, and good work by the support craft and the guys on board.”

Larson learned some valuable lessons from the experience. “Once you're committed to turning one way or the other, you have to stay with it. In these boats you can't peel out of it. We probably would have been fine if we had gybed. In hindsight we probably would have done a good gybe and cleared the lighthouse.”

With all the teams safely ashore and massive gusts still bulleting across the race course, the Bullitt GC32 Racing Tour's Principal Race Officer Anne Mallédant consulted with the five skippers. Everyone agreed that safety should prevail and that racing should wait for the better conditions forecast for Friday. In the afternoon, Alinghi set out on to the water to test everything was working OK after their morning adventure. And Sebastien Rogues was keen to make use of maximum practice time for his French crew on board Team ENGIE, as they put on a show of speed and power for the spectators. For others like Spindrift racing, ARMIN STROM Sailing Team and Sultanate of Oman, they preferred to keep their powder dry for Friday.

Sultanate of Oman’s skipper Leigh McMillan has only had a few days to recover since winning the latest round of the Extreme Sailing Series in Hamburg last weekend. “It was the right decision not to go racing today,” said the British skipper. “We’ve got three more days of competition ahead of us, and it wasn’t worth risking the fleet in such big and unpredictable gusts like we saw today.”

Racing for the Bullitt GC32 Sailing Cup Kiel is now scheduled to start at 12pm local time on Friday.