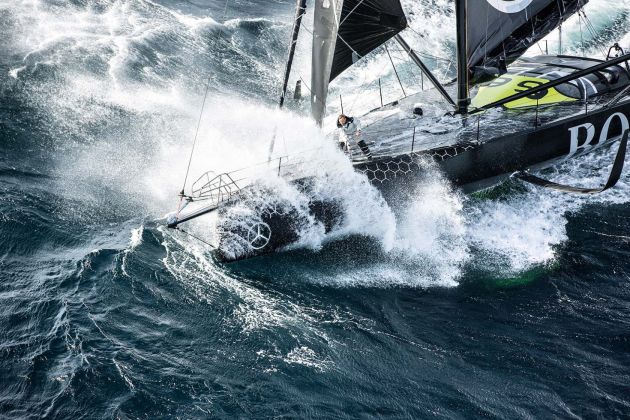 Averaging over 22kts of boat speed during the mid-afternoon hours, Vendée Globe leader Alex Thomson is revelling in his first contact with a low pressure system, 600 miles NE of Rio, which may provide record breaking conditions over the coming days. The British skipper had already clocked up a 24 hour run of 490 miles to midnight Thursday, but with the breeze backing more and increasing to 25kts, conditions should be ideal for record speeds.

With a clear speed advantage, opening his lead to 107 miles over second placed Armel Le Cléac'h (Banque Populaire VIII), Thomson's entire focus will be on looking after himself and his boat, knowing that these fast speeds will continue all the way down the South Atlantic. That said, with his Hugo Boss in close to perfect reaching conditions, the 24 hour record set by François Gabart during the 2012-2013 Vendée Globe race is 534.48 nautical miles in the Southern Ocean in mid December may fall. And according to today's weather modelling the record from Les Sables d'Olonne to the Cape of Good Hope, 22 days 23 hrs 48 minutes, set by Armel Le Cléac'h, looks vulnerable. If the current pace was sustained this race could be three days faster by then.

The fast average speeds reflect the combination of ideal weather conditions, a fast doldrums for the leader and the new generation foiling technology on the IMOCAs. But just as in multihull and inshore foiling races, the gaps are already significantly wider in this race. Six different skippers have led this edition of the race. Thomson has lead on 41 of the 73 ranking reports to 1400hrs this Friday afternoon. His lead at this stage, Day 13, is bigger than the 2008-9 and 2012-13 races. The first weeks of the 2012-13 Vendée Globe saw three different leaders. That is fewer than in 2008 (6 leaders and 13 changes). At the same point in the 2012-13 race there were five boats battling down the Brazilian coast in relatively close contact. In 2012 Bernard Stamm (Cheminées Poujoulat) was the first to get out in front, but just for one set of rankings. François Gabart (Macif) was the next leader of the race for 5 days. He achieved a lead of up to 59 miles over his rivals, before falling into a trap in irregular winds off the Canaries. On 16th November, it was Armel Le Cléac'h's turn (Banque Populaire) then grabbed the lead and was the one in front into the Roaring Forties. In the wake of the blue Banque Populaire, François Gabart, Bernard Stamm, Jean-Pierre Dick (Virbac-Paprec 3) and in fifth Alex Thomson. And in the ‘classic' 2008-9 race after eleven days of racing, the leader entering the Doldrums, Loïck Peyron had been in the lead with a maximum advantage of 10.7 miles. The ten frontrunners were within an area of 150 miles with Loïck Peyron leading south.

The deltas are already significant. Yann Eliès now lies around a day and a half behind leader Thomson in 8th, with Jean Le Cam, Jean-Pierre Dick and Thomas Ruyant a further half day back. They might have made it out of the Doldrums relatively unscathed but any hope of them reeling in the frontrunners has been dealt a blow by the forecast. The trade winds, which offer up quick reaching conditions in consistent breeze, are expected to shift to the NE and drop to around 12 knots, considerably lighter than the 15 knots others have already profited from. To make matters worse a high pressure system developing off Cabo Frio is likely to hamper their progress south further while those ahead extend in stronger winds and those behind catch up.

Meanwhile Foresight Natural Energy skipper Conrad Coleman's exit from the Doldrums today is bittersweet. The Kiwi sailor, in 17th, described his crossing of the notorious low pressure system that lies above the Equator as 'vanilla' having not been too affected by its fickle winds. But now, as he races towards Recife and the favourable reaching of the trade winds, he faces a straight-line tight power reach against rivals sailing newer boats capable of higher speeds in the current conditions. “It was easy in the Doldrums – I never stopped, my strongest squall was about 30kts,” he said. “It was a vanilla crossing. I was very happy – I lined myself up with a nice corridor and stayed in there. It was a dream crossing. Now I have a straight line drag race. I am surrounded by boats which are all newer, which in theory should be faster than mine. A lot of them have got wing masts and they have sails which are cut for reaching. I think I did OK last night but this morning a couple are going very quickly.”

Colman said the constant pressure from the chasing pack, which includes Stephane Le Diraison on Compagnie du Lit – Boulogne Billancourt and Nandor Fa's Spirit of Hungary, is driving him to squeeze every last inch of boat speed from his IMOCA 60. “It would be easy to sit inside with the autopilot on but I am outside, constantly trimming, trying to go faster,” he added. “I am really motivated. I can see the guys are coming but I just need to go as fast as possible.”

In association with the VPLP team, Guillaume Verdier designed twelve of the 29 boats taking part in the 2016 Vendée Globe, including the eight frontrunners.

Twelve days into the race and there have been no official announcements of boats retiring. How do you feel about that?

“I'm really pleased about that, of course. It's something that always worries me. I'm the person in charge of structures, so it's the most worrying aspect, more than performance. The boats haven't yet been through any storms. They have got where they are without any bad weather and the equipment hasn't been affected. It's the first time we have seen so many boats over the Equator. That's fantastic. The only negative point is that Tanguy de Lamotte encountered an unusual problem (mast head damage – editor).”

What do you think about Alex Thomson's performance?

“I'm not surprised to see him in front. He's the one who went for the riskiest design choices. Alex has a boat that is not such a good all-rounder as the other foilers, but when conditions are favourable, he is quicker. Hugo Boss's hull isn't that different from the other foilers. But there is a difference with the size of the foils, and a considerable difference in terms of lift. That is what has made the difference in terms of performance. It's a giant leap forward coming up with such a huge appendage. The fact that the foil pushes harder means there is less resistance, and so he can go faster.”

Do you think Alex is pushing his boat harder than those chasing him?

“No, I don't think so. But as his average speeds are higher, it must be more stressful for him. He needs to be careful to make sure the boat withstands this. More so than his rivals. He is going to have to be very careful in stormy weather and in the Southern Ocean and pull up his foils sufficiently early.”