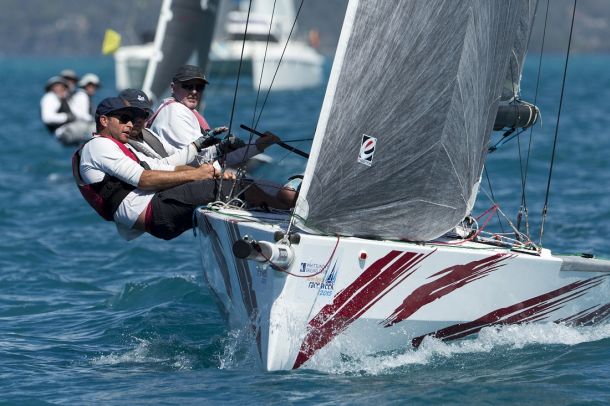 Sports Boat fanatic Graham Sherring is the owner/skipper of a Leech 650 he named ‘Stay Tuned’, and that was the message he sent rivals at Airlie Beach Race Week yesterday, when he won Race 5 of the Whitsunday Sailing Club’s regatta.

Stay Tuned won the Sports Boat Winter Nationals and Sherring, from Southport Yacht Club, is just winding up here at the event billed as the ‘Tropical Festival of Sailing’, enjoying the fresher conditions that the wind gods provided mid-race yesterday. Now he is looking forward to even bigger breeze today and Friday.

Sherring says todays win has made them more confident, as has the forecast for even fresher conditions for the last two days of Race Week.

“We love bigger winds – that makes us even more confident. We’re at our best in those conditions, so bring it on,” he said.

The Queensland sailor described yesterday’s race: “The first part was very tricky, around 8 knots, until we reached White Rock where the breeze filled in,” he said. “Then it filled in to 15 knots from the north-west for the rest of the afternoon, so we had a fast trip across the Bay.”

Sherring said his crew had their share of heart-stopping moments. Early in the race, Andrew Wiklund’s Egan 7, Crank from Royal Queensland Yacht Squadron, challenged them. Later on when the breeze built, The Ducks Nuts, Mitch De Vries’ MSP7500 from the South of Perth Yacht Club had a crack.

In the end though, it was fellow SYC member, Noel Leigh-Smith with Viper, who finished second to Stay Tuned, with John Rae’s Vivace third. And it is Vivace, a Bethwaite 79er, which leads the series. Viper is second overall.

And therein lies the rub. Vivace leads Stay Tuned by three points and Viper is two points in front of Sherring’s boat with two days of racing remaining.

“Vivace and Viper are our biggest threats – the largest and smallest boats in our fleet,” Sherring said. “We’ll need to be at our best to beat them,” he conceded.

Racing in all classes at the Tropical Festival of Sailing continues from today from 9.300am this morning.