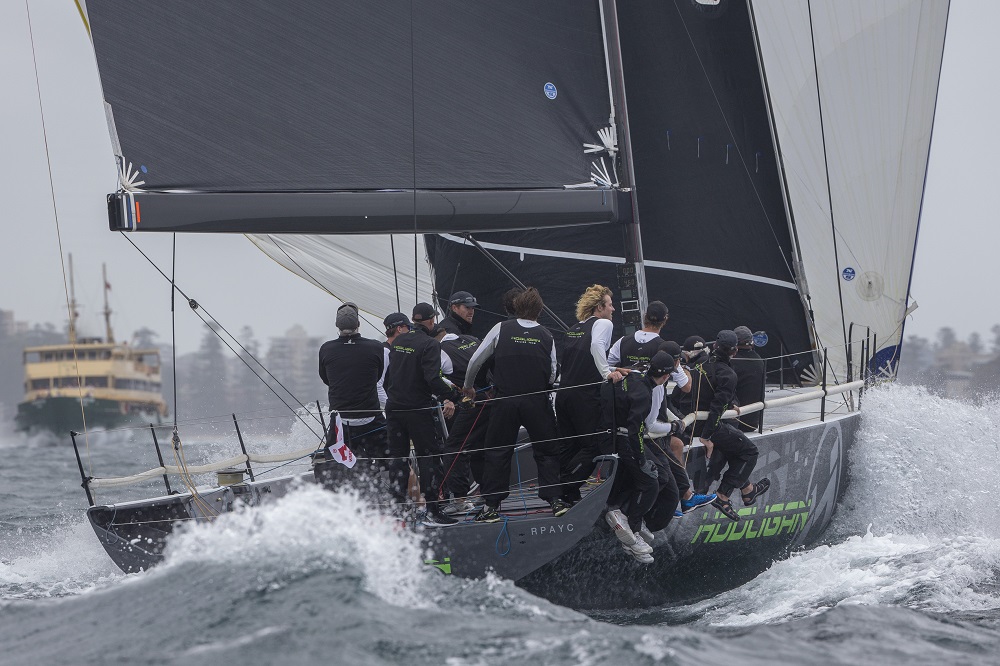 Hooligan in form at the Sydney Harbour Regatta - Andrea Francolini.

Officials from Whitsunday Sailing Club are gearing up for possible record numbers and a ‘Clash of the Titans’ between the top two TP52’s in the country at the 30th anniversary Airlie Beach Race Week, to be held from 9-16 August.

“All numbers are well up on last year and every other recent year,” says Race Director Denis Thompson of the 74 entriesfrom around Australia and New Zealand so far received across the eight classes.

“We got an early rush. It’s going to be a great regatta,” he says. “The IRC fleet is always pretty good, because a lot use Race Week for a warm-up, so we get a first look at therm. There’s some great boats coming.”

Two of those great boats are Matt Allen’s Ichi Ban and Marcus Blackmore’s Hooligan. It will be the first time the two TP52’s will face-off and neither will be taking any prisoners.

In the tried and tested corner is Ichi Ban. Launched in October, the Botin design has swept all before her, starting with the Rolex Sydney Hobart last December, before cleaning up Division 1 of the Australian Yachting Championship in Melbourne and then claiming overall honours in the Brisbane Gladstone Race.

Slightly older, but no less effective is Blackmore’s latest Hooligan. A two year-old champion that formerly raced in Europe as Azzurra, she arrived in Sydney trailing a few European regatta titles with her.

Re-launched in March in time to win all four races at the Sydney Harbour Regatta, the Blackmores vitamin king said: “I’ve got a very talented crew (some of the biggest names in yacht racing) and Victor Kovalenko as our coach.

“As a team, we went really well – and I think that’s half the battle.”

If that is the case, a battle it will be – and it will be an intriguing one for anyone interested in yacht racing – as Allen, the president of Australian Sailing, is assembling a crew chosen from a pool who have raced with him for years.

Having said that, as Denis Thompson points out, “Airlie Beach is a very friendly regatta; different to all others. There is a point of difference between courses at Airlie Beach and Hamilton Island that differentiates the two as well.”

Onshore, Thompson said, “Whitsunday Sailing Club is taking the after-race entertainment to a new level by holding it at a variety of venues, which will make it more interesting. It is something that works well at Asian Regattas, so we’ll see how it works here as well.”

More about those later, but in the meantime, WSC will still host some recent additions to the social program which have quickly become de rigueur for those staying ashore.

In its third year, ‘The Long Lunch’ menu is Reef & Beef. Enjoy the company and the view while the yachties are out on the race course.  Tables are selling quickly, so book now on (07) 49 466 138 or send an email to: functions@whitsundaysailingclub.com.au

Feel like running or walking off lunch – or helping raise money for a worthwhile cause? Join in the Festival Fun Run. You can walk or run the single mile, or as many miles as you like inside one hour. For every mile achieved, Airlie Beach Race Week Festival of Sailing will donate $1.00 to ‘A Mile In Their Shoes’.

Staged by the Airlie Beach Running Club and proudly supported by WSC, selected winners will receive meal vouchers to enjoy at the Club and all are invited to swing to a night of live music from ‘Living in the 70's’.

Entries for Airlie Beach Race Week Festival of Sailing close at 2400 hours on Thursday 2 August, 2018. Entrants requiring berthing need to make arrangements with Abell Point Marina or Port of Airlie as soon as possible, because demand is always at a premium throughout August.

Growing corporate support is making an ever-improving program for the week- long onshore festival possible. “The event can’t be staged without the backing of a range of sponsors, from major partners through to local business supporters,” Event Chairman, Ross Chisholm said.

Entry, Notice of Race and all information go to: www.abrw.com.au/sailing/entries