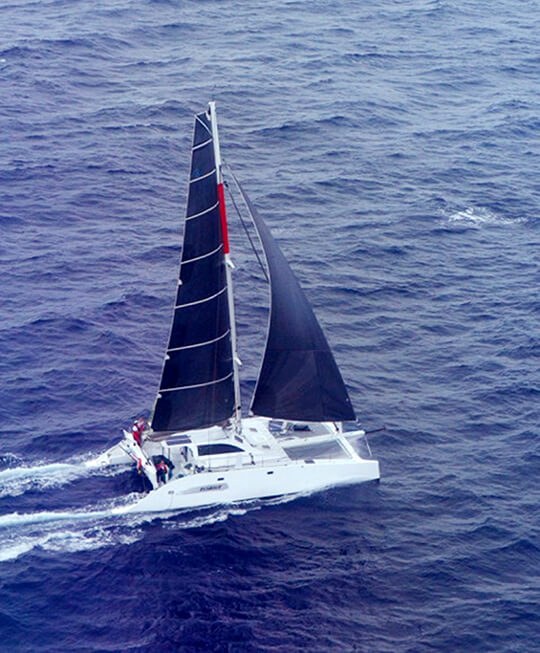 Rushour skipping along in the Grand Passage.

Overnight fresh sou’east breezes along the New Caledonian east coast gusting to 35 knots changed the momentum and mood in the Groupama Race and the fleet welcomed the 12-hour adrenaline hit.

By mid-morning the wind tapered off leaving the slower boats to resume their struggle, two more falling by the way. Notorious from New Zealand and Sticky from Australia advised the race committee they were abandoning the event and motoring back to the capital Noumea, where the 654 nautical mile race began on Sunday morning, June 17. All are OK on board and it’s understood the skippers made the decision based on the calculation they couldn’t meet the time limit of 1800hrs Saturday.

Six of the 19 boats continuing have now passed between Grand Passage and the magnificent Entrecasteaux atolls and turned the north-west corner for the leg south on an overcast and rainy day three. The morning sou’east breeze swung to the nor’east during the day and next shift is expected to be south-west, with the arrival of the forecast change.

Graeme Wilson and William Goodfellow’s IRC TP52 Miss Scarlet is not giving up their 10nm buffer on Brian Petersen’s Elliott 50 Ran Tan, also from New Zealand. Third in the fleet is the Aussie team on the Ker 46 Patrice, which doesn’t have the waterline length or speed of the front pair but can do some damage in terms of corrected results.

Patrice’s navigator Michael Bellingham said at dawn: “We are in good shape though we had some pretty severe weather coming to the mark… 35 knots from the south for a few hours. It was very exciting running under spinnaker.”

“Ran Tan is five miles in front of us and [Franck] Cammas is 18 miles. We know we can’t sail faster than them so our strategy is to not let them get too far away. I think there will be some pretty sailing down the west coast.”

At 1500hrs Ran Tan reported light winds and rain on the western side of New Caledonia, in contrast to the overnight blow and busyness of multiple sail changes. To try and catch Miss Scarlet, Ran Tan’s crewman said: “We are just raising one of our bigger sails and we will try to be cunning with our sails and the weather, and see if we can go any faster.”

Those 40-footers which closed the gap on the front three along the northern boundary of the exclusion zone at Grand Passage, one of New Caledonia’s UNESCO recognised areas, have stepped up in terms of corrected time results. At 1430hrs, Steven Mair’s Bakewell-White 37 Clockwork had reclaimed the top spot in ORC results and Banque de Nouvelle Caledonie, Michel Quintin’s JPK 10.8, led the IRC overall scoresheet.

Drew Carruthers’ 14m catamaran Rushour from Queensland is the big mover in the multihull division, mowing down the Crowther 40 Ave Gitana and leading on handicap.

“For 8-10hrs yesterday we were doing less than 3 knots, then since 10pm last night we’ve had fantastic sou’west to southerly breezes of 20-30 knots and our speed has been 18-22 knots,” said Rushour’s crew Becky Maloney in their morning call. “We are having a fantastic race – now!”

Ave Gitana advised they’d triple reefed the main and were bare-headed in the fresh overnight conditions, the bullets testing the crew in terms of keeping the tri on its feet.

The latest estimate for the first arrival is Wednesday late afternoon or evening and the ETA for the last boat in the fleet, SOCARE Odyssey, is Sunday afternoon with the French boat still 460 nautical miles from the finish and making slow progress at just 3.4 knots.