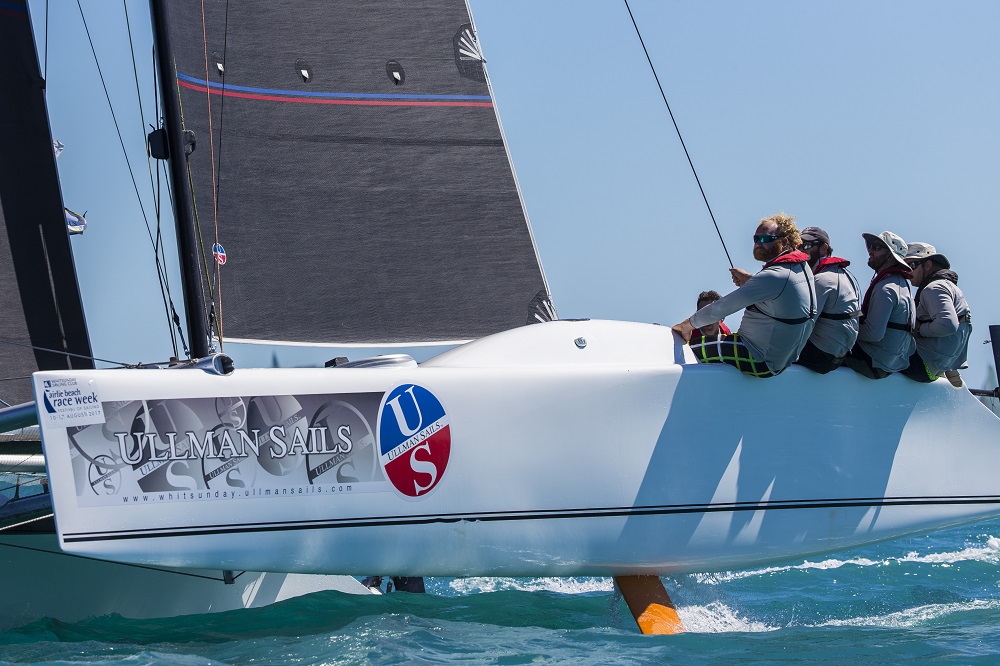 If Matt Allen’s Ichi Ban is the ‘one to beat’ in the IRC class, then multihull racers should watch out for Paul Mitchell’s Ullman Sails at Airlie Beach Race Week 2018.

Mitchell, a sail-maker and life-long Whitsunday sailor with national and international titles to his name, was determined to be the first local entry to the 30th anniversary of his home regatta.

One of the Whitsunday Sailing Club’s great success stories, Mitchell sailed his way up the junior ranks to win the 505 Youth World Championship twice.

His 10-metre Grainger catamaran Ullman Sails has an equally prominent past.

Previously known as Mad Max, it was owned and campaigned around Australia by Tony Consadine.

After buying and re-naming the boat in 2016, Mitchell raced Ullmans Sails to victory in the Multihull division of Airlie Beach Race Week 2017.

The very next day he jetted to San Francisco where he took out third place in the J/111 World Championship.

On returning home Mitchell trucked Ullman Sails to Brisbane, where he claimed the top podium spot at the 2017 Australian Multihull Championship.

Airlie Beach Race Week’s Adrian Bram said Mitchell’s entry to the 30th anniversary Festival of Sailing had set the bar high for both multihull and local sailors competing at this year’s milestone regatta.

“He’s the one to beat out there, and having someone who’s got such an enormous breadth of experience, particularly at that elite level, sets the benchmark really high,” he said.

For Mitchell, who has Sydney Hobarts and plenty of Hamilton Island Race Weeks under his belt, nothing means more than competing at Airlie Beach.

“This is our home regatta and probably the most important one we do each year apart from obviously going to the Nationals or World’s,” he said.

“We’ve got to try and support our local sailing clubs as much as we can and to me this is about representing Airlie Beach.”

Mitchell knows he will be heavily handicapped and already has a strategy of sorts planned out.

“We owe some boats nearly double our time so we need to be a long way in front of everyone else,” he said.

“We’re probably the highest rated boat here so we’re going to need to get out, find that clear air and start sailing our own race as quickly as possible.”

As for his competitors and particularly those based close to home, Mitchell had the following advice:

“Get your entries in – these regattas always generate more exposure for the area when you’ve got high entry numbers so the more we can get entering locally and from interstate the better,” he said.