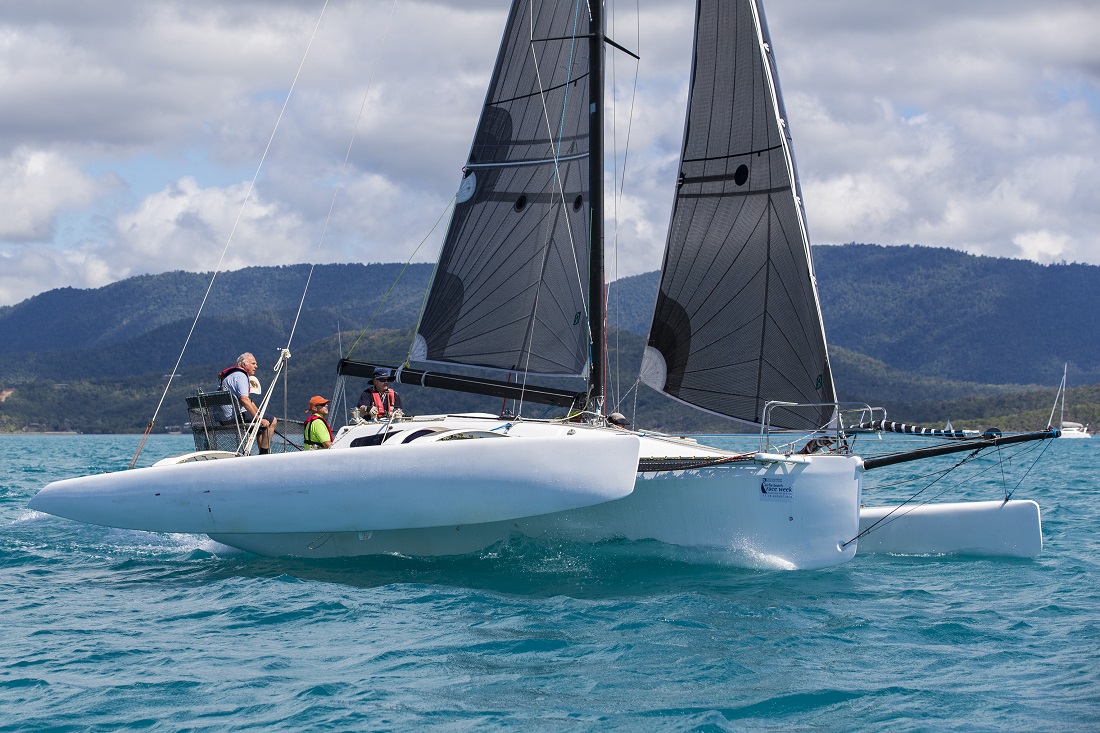 Overcast yes, but conditions looked more manageable than yesterday, with winds in the 16-20 knot range at the 27th Airlie Beach Race Week today, but low and behold, not everyone got off scot-free.

In the Whitsunday Sailing Club hosted event, the Multihull Racing fleet lost two of its number. Mark Stafford’s trimaran, Closer to God (Vic), turned turtle, and while all on board are safe and well, it will take some doing to re-float the boat.

Victoire’s owner, Dr Darryl Hodgkinson, noticed something amiss. “I saw the boat and then I didn’t, so we went over and found her turtled. Everyone was fine. We took two crew on board Victoire and two stayed behind to look after the boat,” he said after retiring from the race.

Next out of the race was Garry Crick’s catamaran, Zero (Qld), after snapping off her starboard daggerboard. Aboard the big cat, Peter Baker said it was a pity, as the boat was going fast. “We were doing 16 knots in 19 knots of wind,” he said.

Pushed into the background with all that happened today, Tony Considine’s APC Mad Max with George Owen skippering, scored her fifth win from as many races in the Multihull Racing division. She looks unbeatable.

“Heavy boat and heavy weather – that suits us,” Owen said. “I heard about what happened to others today, but don’t worry, it wasn’t without its moments for us either. We had a dreadful start, lost the mainsheet just after the first mark, had a bad override on a winch and lost a halyard up the mast….”

Owen credits a couple of his crew, including Bob ‘The Guru’ Engworda: “He’s a Hobie legend and keeps his eyes out of the boat, which allows me to concentrate on driving,” he said.

“On the work up to White Rock, we had an adverse tide. Most people tacked into the shore to get out of it, we didn’t, we went across it and picked up to second place, then got the last one on the work back to Grimstone.

“The trick is to work around the problems and keep driving fast. We were doing 11-15 knots upwind and 21 downwind. We hit a squall of 25 knots for about 10 minutes coming to the finish at Grimstone,” Owen ended.

Out on the Sports Boat course, Rob Le Man’s Queensland entry, Depthcharge Ethel, came a cropper when a crewman collected a walloping from the boom and momentarily lost consciousness. He was transferred to our media boat conscious and into a waiting ambulance back at WSC.

Others boats sustained damage, including sail damage and a sports boat retired with a broken rudder.

You had to be here, because it was not a particularly heavy weather day, more a case of a few bullets hitting their targets, and some sailors unprepared for the strength of the wind and choppy water once they came out from the lee of the land. But it added weight to Race Director Denis Thompson’s decision not to send these classes on the water in yesterday’s excessive conditions.

A north/west tide made it a battle going upwind – testing one might say, but the run home to the finish line would have been a fun slippery dip ride.

The larger classes raced a 30 nautical mile course taking in White Rock, the Molles and Grimstone Point, while the mid-range boats sailed a shorter version of that course.

Spinnaker Cruising Division 3 contested the Daydream Island return race via Bluff Point, while the Trailable and sports boats sailed three windward/leeward races each on the bay.