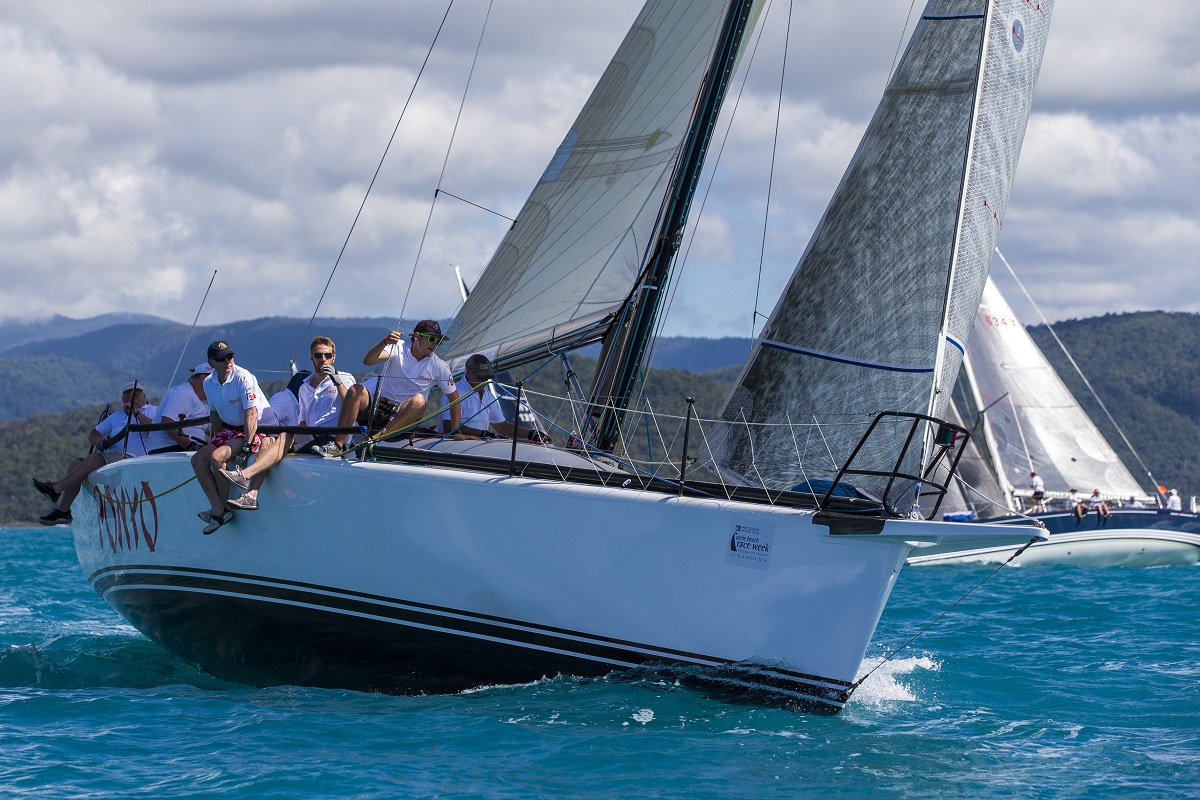 The weather gods turned their wrath on competitors at Airlie Beach Race Week today, the normally ‘Tropical Festival of Sails’ was not living up to that moniker, instead winds gusting 35 plus hit the Whitsundays.

Race Director for the Whitsunday Sailing Club’s annual regatta, Denis Thompson, called race officers to a meeting this morning to make tough decisions. In the end, it was decided IRC Racing and Passage divisions, along with Spinnaker Cruising Divisions 1 and 2, would race on the bay.

Thompson and his crew deemed the remaining classes vulnerable to gear breakage and damage.

In IRC Passage, Ray Roberts steered Team Hollywood (NSW) to its second series win to maintain the overall lead. Roberts, who normally enjoys fresher conditions of the type that were offered today, said it was not the case with the Sydney 38 he has chartered for Airlie Beach Race Week.

“I normally like strong winds, but these boats are hard to handle in these conditions. It’s easy to wipe out – which we did in Sunday’s race – and lost Carl Watson overboard. We dragged him back on board pretty quickly,” Roberts said.

“Today was difficult as there were big gusts at 15-20 degrees variance to the south-east wind, so we decided to sail more conservatively. You had to run a spinnaker with caution because of the gusts – and breeze flicking up and down.

“Whoever made the least mistakes today won – and we did that,” Roberts ended.

Team Hollywood’s main rival, Ponyo, the modified Farr 40 owned by David Currie (Vic) finished down in seventh place, to lose more ground on the leader, which is looking impossible to beat with only two days of racing remaining.

Moving up the board was Justin Brownbill’s Sydney 36, Botany Access Cocomo (NSW), which finished the race second to move up to third place overall, while Trevor Bailey’s Beneteau First 45, Carbon Credits (NSW) slots into second place on the leaderboard after finishing fourth today.

Belinda Cooper scored one for the Ladies this afternoon, steering her Beneteau 42.7 Senga (Qld), to a win in Division 2 to take the series lead, with Roger Jepson’s Thompson 870, Wheres Wal? (Vic) moving up to second overall and yesterday’s leader, Boadicca (NSW), owned by Peter Byford, dropping to third overall.

Cooper has a mainly female crew, but has been joined by Kiwi couple Iris and Grant Bartlett, who came especially for Airlie Beach Race Week. Her nearest rival was Angus Fletcher’s Radford 13.7, Tavake II (Vic), which she beat by nearly four minutes. Peter Harrison’s Awesome, the local boat, was third.

“It wasn’t as windy as expected, except it was quite gusty to start with. We sailed fairly conservatively to preserve the boat and gear,” a thrilled Cooper, who represents Port Douglas Yacht Club, commented this afternoon.

Senga, which normally sails with a full female crew, added a couple of male catamaran sailors to the crew today. “They come in handy for extra weight on board on a day like this and are good for turning a winch handle or two,” Cooper said, laughing.

Of the conditions, the yachtswoman said the south-easterly was mainly in the mid-20 knots range, but the further out you went the breezier it became and the waters choppier.

“It wasn’t worth it. You could control your boat better closer to the main bay area. We didn’t set a kite either. We set up for it and looked at it, but we were gaining on the boat in front of us that was carrying a spinnaker. In the end, it was just too shy, so we didn’t bother.”

Conditions are forecast to ease slightly tomorrow, with 20 knots predicted on the course areas, ideal for racing.