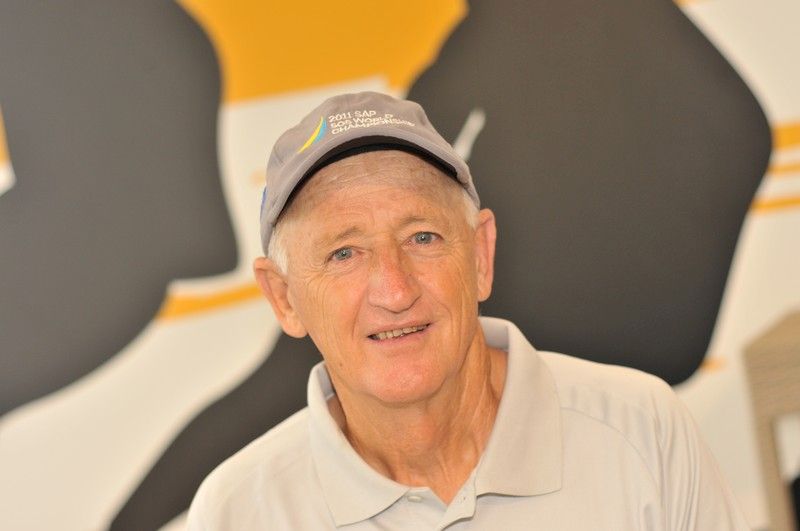 Ahead of the Annapolis 505 Worlds, we look at the profile of a perpetual competitor from Australia:

OCCUPATION/EMPLOYER: Retired. I worked for the last 20 years as a consultant mining engineer. For 30 years before that, I worked as engineer and manager in underground metal mines for mining companies and government mine safety inspectors.

CURRENT SAILING PARTNER: My current crew is Matthew Bowden. In 1987, 15-year-old Matthew and his mate Shane Illidge were hanging around the sailing club looking at boats. He came for a ride in my old 505 and loved it so much they bought an old Parker 505. Most of my 505 sailing has been with my long-term great mate Ian Gregg.

WORLD CHAMPIONSHIPS ATTENDED: First one was 1988 in Sydney and I finished second-to-last. I then did Quiberon in 1999. I have only missed two world championships since then.

TOP FINISHES AT WORLDS: I finished 41st out of 130 boats in Weymouth with the worst race being a 44th. We like the strong wind and rough stuff.

OTHER NOTABLE CAREER RESULTS: I placed sixth at the 2008 Australian National Championship at Hamilton Island. Ian Gregg and I led the strong wind race by over a minute and finished second in the next race just to prove it.

FAVORITE SAILING MOMENT: Every day on the water is my favorite sailing moment.

Q: Tell us how you originally got into the 505 class and why you have stayed with it for so long?

A: I sailed a family dinghy called a Corsair with my two boys. When they reached 15 years of age they abandoned me for 420s. In 1986, I purchased an old 505 and haven’t wanted to sail anything else ever since. The 505 community around the world have become my close friends. Their backpacking children stay at my family’s homes around Australia. I travel the world not as a tourist but as a 505 friend visiting and staying with the 505 community.

Q: Why did you decide to sail the 505 instead of a different class? What attracts you to the 505?

A: Some of the Australian 505 champions, Dean Blatchford, Tom Woods, Dave Porter, Peter Hewson and others came to my sailing club for a weekend. After that I had to have one. Once you have sailed a 505 in both light and heavy wind you realize that the 505 can be sailed completely under control and fast in all conditions. Just look under the bow as you plane down a big wave at close to 20 knots and you will know what I mean. There are no secrets in the 505 community. The top competitive sailors are willing to share and help you set up your boat. Newcomers and novices are made to feel welcome.

Q: Your name shows up in results all over the world – places such as Italy, Germany and

Scandinavia. How have you been able to do so many international events in such far-flung

A: It is only since I started to work in my own consulting company in 1998 that I have been able to have the time and money to travel the 505 world. I have decided to “SKI” (spend the kids

inheritance) while my fitness lasts. I don’t intend to fall off my perch with much money in the

Q: Do you own multiple 505s that you keep on the various continents of the world?

A: That’s a bit embarrassing. I have four 505s in Australia and only one in Germany.

In Australia, as I have upgraded, I decided not to sell the older boats. They are borrowed by my

friends. Matthew’s two girls (who are 16 and 18 years old) and Ian’s son Chris (12) are now using the boats and hope to sail at the Fremantle worlds early 2019. Thanks to my good friend Holger Jess in Germany I keep my good “Holger” boat 9028 with him in Kiel, just like some other Australians and a few Americans.

Q: How many different people have you sailed with over the years and can you tell us a little something about those you spent the most time with?

A: Finding and keeping good crews is just like the rest of your life journey. It is not just sailing, but enjoying life with tolerance and understanding. I can honestly say that I have never had a

“cross” word on my 505. It is not possible to just have one person as crew when traveling the 505 circuit. My current crew – Matthew Bowden and his wife Peta and their beautiful daughters Maggie and Christie – are special friends. Ian Gregg along with wife Helen and son Chris are also special friends. Until a few years ago, Pip Pearson and I sailed many overseas regattas together. Pip now drives the gate start boat at the big regattas. Pip and I have an agreement to attend all 505 regattas unless there is a good excuse. Other special crews in the past few years are: Arne Lanatowitz, now living in Oslo, Norway. I visit Arne and Kicki in Oslo each year. John McLean (Crazy) who spends at least half his time out of Australia in Europe travelling with wife Lyn in their mobile home. We have more fun than most people and do quite well. Paul Ridgway and I sail together sometimes, such last year in Lake Garda and Kiel. Paul and his wife Bronwyn were Tasar world champions.

Q: Is age a challenge or problem for a 505 sailor? It is a demanding boat that one would think

A: I have been lucky with my health and fitness. I eat well, drink good red wine and have always

slept well. Having good boat handling skills is critical and makes it easy to sail a 505 provided

you have a fit and skillful crew. Learn to sail smart and easy and let the crew do most of the

leaning to keep the boat upright.

Q: How come everyone in the class likes you so much? You are like the Pied Piper of the 505

class. Ask 10 class veterans who they would most enjoy having a beer with and almost all would

A: Easy question. I like the people in the 505 community. I like having a beer or wine with them as well.

Q: Have you ever actually protested anyone?

A: Only once to get redress at the Adelaide worlds. Unfortunately it backfired and the protest

committee disqualified both of us. That is the first and last time.

Q: What have you learned recently while racing the 505?

A: Get the boat set up so everything works easily. Set up the measurements and calibrations the same as the top sailors. Don’t reinvent the wheel.

Q: Are you looking forward to coming to Annapolis for the 2017 Worlds? What do you hope to

do during your spare time while here? Have you ever been to the East Coast of the United

States for a regatta before?

A: I can’t wait to sail the Annapolis worlds. I am looking forward to taking in the Chesapeake Bay atmosphere and blue crabs and sea food that I have heard so much about.

Ali Meller and I sailed the North Americans in Rye, New York in 2011 in Henry Amthor’s second

boat and won the first master skipper trophy. I proudly hang the plaque and photo on the wall at home.