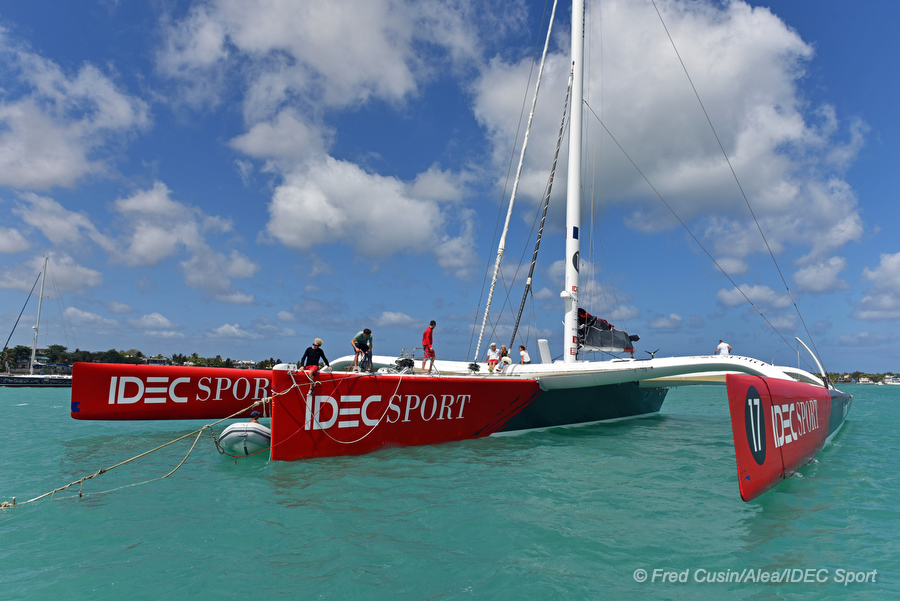 Twelve days after completing the first act in his IDEC SPORT ASIAN TOUR, when he smashed the Mauritius Route record by more than six days, Francis Joyon is about to tackle the second leg of the voyage taking him to Asia. He will set sail from Mauritius on Thursday morning on a route that modern ocean racing boats are not used to sailing.

The route will take him across the Indian Ocean towards the China Sea and Vietnam with its capital, Ho Chi Minh City. This is another record attempt, this time with a crew where they will be able to discover the exotic Far East, passing between Java and Sumatra via the Sunda Strait, passing Indonesia, Malaysia and into the China Sea, before heading for the Mekong Delta and the former Saigon that has been called Ho Chi Minh City since 1976.

This will involve more than 4000 miles of complicated sailing heading into the trade winds, encountering calms and then the shipping lanes in the China Sea, one of the busiest sea areas in the world.

“It is a huge pleasure to be able to set off on this adventure towards places that our Western racing boats are not used to sailing in. It will be with a short-handed crew where everyone works well together.”

The record-breaker, Francis Joyon enjoys the idea of taking on the role of the sea captains from the 18th and 19th Century, who sailed into these mysterious waters in the Indian Ocean.

“We are really setting off on an adventure in Terra Incognita,” he explained, clearly excited by this prospect. “The big sailing vessels of past centuries found it hard to head upwind in the trade winds. In order to reach Java or Sumatra, they had to make a long detour via the south towards Australia to be able to sail downwind and then head back up north to the China Sea. We will probably have to do the same, as the Indian Ocean can be nasty and heading into heavy seas could punish the boat, as I saw for myself during the final 24 hours of the Mauritius Route record. There is also the option of heading due north, but we’re a bit afraid of the light airs that prevail to the north of Sumatra.”

IDEC SPORT is about to set sail on a long journey with “between 16 and 18 days of sailing,” added Francis, who is back in race mode of course. “We will start the clock when we cross the start line, which is the same one we had for the finish of the Mauritius Route just off Grand Baie. We expect to set sail on Thursday morning with the tide, as the boat is moored in the bay, where the waters are not that deep.”

Once again aiming for a convivial voyage, Francis has called upon the services of the boat’s faithful friends as his crew. “Our Boat Captain, Bertrand Delesne, who has worked hard over the past few months on the boat, is quite naturally going to be with us,” explained Francis. “We’ll have the same crew on board that did the delivery trip last year on the way back from the Route du Rhum race, with Christophe Houdet, who cannot remember whether he has crossed the Atlantic sixty or seventy times… Antoine Blouet, who has been preparing the boat for some time now and knows her well, and then there is my son, Corentin, who also knows the boat like the back of his hand.”

So, there will be five men to sail the giant vessel, “the wild one,” as they affectionately call the IDEC SPORT trimaran. “You can understand by looking at the preparation what makes this IDEC SPORT ASIAN TOUR so difficult and such a challenge,” explained Francis. “When we left Brittany, I brought with me everything we will need to sail with a crew, beacons, bunks… even the tender which was carefully stowed aboard during the voyage to Mauritius.”

The IDEC SPORT ASIAN TOUR programme of record attempts includes four big challenges. The Mauritius Route record between Port Louis in Brittany and Port Louis on the island of Mauritius; A new record to set between Mauritius and Ho Chi Minh City; Another reference time to establish between Ho Chi Minh City and Shenzhen (China), and finally an attempt at a previous record on the Clipper Route between Hong Kong and London. The three record attempts that are about to be carried out will be sailed with a crew.