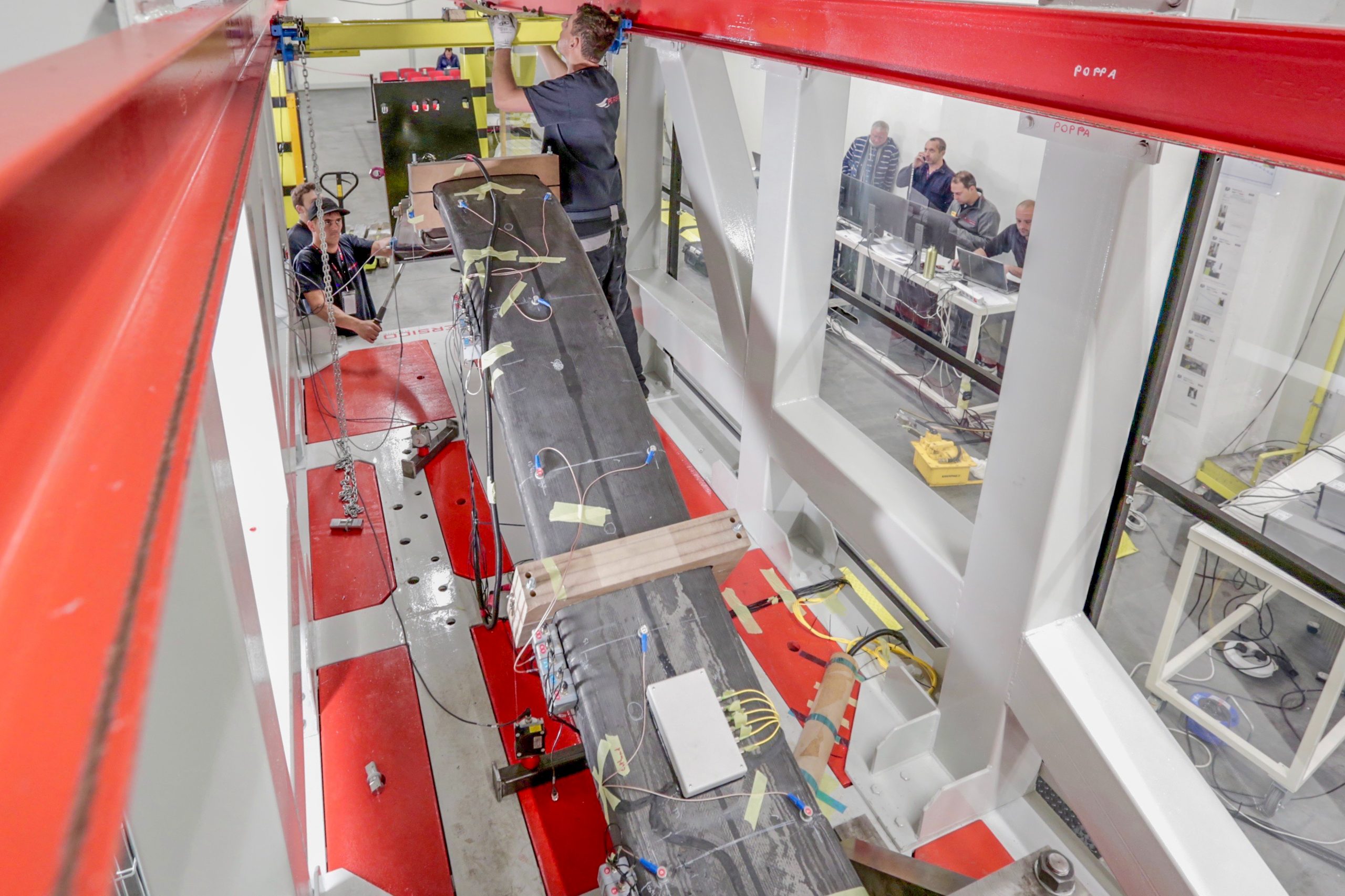 The second round of structural testing of the one design AC75 foil arms has successfully been conducted at Persico Marine in Italy this week.

Comprehensive tests were undertaken over the course of three days, with more than 100 different load cycles applied to the foil arm and were the final step in the foil arm design and construction process which has been led by Luna Rossa Challenge. The focus can now turn towards completing the production of the foil arms before they are distributed to the teams, in preparation for the respective launches of their AC75s in the coming months.

The satisfactory result follows on from the first round of one design foil arm testing undertaken at Persico in September 2018 after which a working group, with representatives of structural engineering from all of the teams to collaboratively redefine the design and build process for the one design foil arms for the AC75s.

A joint effort was led by Alessandro Franceschetti, Head of Structures for Luna Rossa Challenge together with New Zealand based composite engineering consultancy Pure Design and Engineering and Stefano Beltrando of Qi Composites who managed the quality control process.

During the testing, the one design foil arms were subjected to loads well in excess of twice those that are anticipated to be reached during intense AC75 racing.

The one design foil arm is one of the primary structural components of the AC75. Today we achieved a great milestone towards the 36th America’s Cup. This was a full-scale testing program, a 1:1 scale foil arm prototype was tested under specific critical load-cases to mimic and analyse its structural behavior under extreme conditions, such as high asymmetric loading and grounding scenarios.

For the first time in America’s Cup design program history, a fully instrumented one design primary component has been tested to its full load carrying capacity until breakage. Today, we reached our targets and achieved all of our objectives, it was a synergic effort among all the teams,” said Alessandro Franceschetti.

Representatives from the Challengers, the Defender Emirates Team New Zealand and relevant stakeholders were present at Persico for this important milestone.

Andrew Corkery of Pure Design and Engineering: “While the foil arms are one design components across all teams, the same challenges in managing this project have remained in balancing innovation and performance, with safety, reliability and cost efficiency. It is always a huge challenge to tick all of those boxes, but with the outcome of these tests now positive, we will look forward to judging the performance on the water in the near future.”

Guillaume Verdier, Naval Architect, Emirates Team New Zealand: “Breaking foils in the America’s Cup is not new, it happens when you are pushing the boundaries. We did this in the last campaign in Bermuda and it is never a quick fix, but these setbacks are recoverable as we have witnessed today and that’s what the America’s Cup is about.”

Currently, the eighth foil arm is under construction at Persico, so the expectation is that the initial sets of foil arms will begin to ship to the teams in the coming weeks.

Marcello Persico, CEO of Persico Marine: “The America's Cup foil arm project is a unique opportunity for Persico, which no other company in the industry has had the opportunity to undertake. Our team at Persico has worked very hard with the Cup teams on the development of this project, the testing and to ensure that the one design foil arms are absolutely identical.”

The other vital component to make the AC75s fly is the hydraulic and electronic foil cant system which was designed and built by Emirates Team New Zealand. The foil cant systems have already been dispatched and received by the teams.

Once the foil arms are received and subsequently installed, it will be all systems go for the launch of the first iterations of the AC75. The countdown to see these boats on the water is on.

To run the foil arm test, a bespoke test jig was been built in a secure area at Persico Marine. The set up allowed the 4.5m carbon foil arm to clamp on the cant axis point with a strop attached to a steel ‘replica wing’ which simulates the foil wing. Load was applied by a hydraulic cylinder.

Eight series of tests were undertaken to simulate the different loads the arms will be subjected to when the AC75 will fly.

The first two tests were performed applying an asymmetric load on the inboard wing to mimic what happens when the outboard end comes out of the water.

Tests number three and four were performed by applying the asymmetric loads to the outboard end using the same strains and cycles (30+) as above.

The fifth test was a bear-away load case and it was performed in order to simulate the maximum cant moment which would happen normally at the top mark.

Test six was an impact load case, to simulate the event of the arm hitting another surface.
The last two tests (7 and 8) were again bear-away load cases, but this time the weight applied was brought to the point where audible noises (test 7) and breakage (test 8) were expected.

To monitor any potential internal damage to the board, the foil arm was covered by microphones and fibre optic strands to record the acoustic emissions and strains at all times. Ultrasound surveys were completed after each test.

The AC75 port and starboard foils are composed of a foil arm and a foil wing.

The AC75 4.5 metre long carbon foil arm has a wing attached to the tip of the arm, which provides the upward force needed to lift the AC75 clear of the water. The foil wing (4 metre span) is custom designed and will be built by each team.

Driving the foil arms is the electronic and hydraulic foil cant system (FCS), another one design supplied part which puts the arms and wings in and out of the water. The foil cant system was designed by Emirates Team New Zealand and manufactured in Auckland.