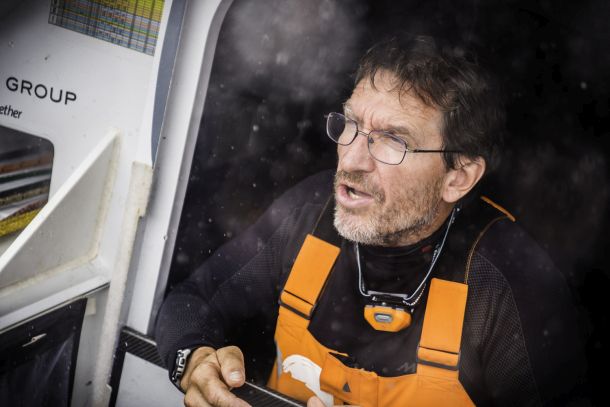 ABU DHABI, January 3 – Abu Dhabi Ocean Racing (Ian Walker/GBR) bade farewell to their home port for the hazardous Leg 3 on Saturday by leading the fleet out towards their eventual destination of China from under a blanket of fog.

Light winds are forecast for the first few days of a stage which is expected to take about three weeks before the six boats arrive in Sanya, China.

Few had reckoned on a thick fog for the leg departure from Abu Dhabi (1000 UTC) where the boats had spent Christmas and New Year.

It enveloped the course from early morning and stubbornly refused to shift, even under the normal hot midday sun.

Instead the teams had their work cut out even to see the turning marks through the murk before leaving the port where they had enjoyed such a wonderful break.

Azzam finished the in-port course after just under an hour (59min 34secs) as the sun finally began to poke through with Dongfeng Race Team (Charles Caudrelier/FRA) and Team SCA (Sam Davies/GBR) on their heels.

For Team Vestas Wind skipper Chris Nicholson (AUS) and his crew there must have been very mixed feelings as they waved their rivals farewell for the 4,642 nautical mile (nm) trip to Sanya.

Nicholson’s boat is now heading for a major repair job culminating in their hoped-for return to the race for the final two legs from Lisbon from June 7 following their grounding during the second leg on a reef in the middle of the Indian Ocean.

“The toughest moment for us will be the first night of the leg,” Nicholson told a news conference on the eve of the departure.

“That’s when you really know you’re in an offshore race. But we have a new target now – to concentrate on repairing our boat to return to the race.”

The third leg promises to be intriguing all the way but particularly during the Malacca Strait which separates the Indonesian island of Sumatra and Malaysia.

At some stages, it narrows to 1.5nm and is one of the busiest shipping lanes in the world.

“It’s the most challenging part of the whole race,” Team Alvimedica (Charlie Enright/USA) navigator Will Oxley (AUS) said on the eve of the leg.

“I'm pretty happy dealing with big waves and strong winds, but the complexity of dealing with a narrow channel, and a very large amount of shipping is what causes the problems.

“Some 300ft of steel coming at you at 20 knots is always concerning, particularly if you haven't got much control over your speed if there's not much wind.

“Then you have squalls, very violent squalls in the night, and there's lots of fishermen who are not showing navigation lights and have long nets. You can get tangled in the nets, or worse still, run someone over. So it's very stressful.”