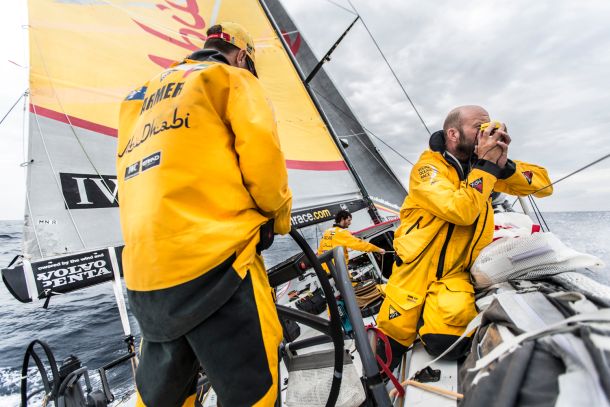 The Volvo Ocean Race fleet was still locked together no more than four nautical miles (nm) apart after more than a day and a half of racing in Leg 7 on Tuesday, with overall leaders Abu Dhabi Ocean Racing (Ian Walker/GBR) reporting two cases of sickness on board.

The 2,800nm stage from Newport, Rhode Island, after a triumphant stopover there, to Lisbon, already promises to follow the race-long pattern of extraordinarily close duelling between the six-strong fleet with around 400nm covered so far through the Atlantic.

At 0942 UTC, Dongfeng Race Team (Charles Caudrelier/FRA) were protecting a wafer-thin 0.9nm advantage over Walker’s Emirati-backed crew, but even sixth-placed Team SCA (Sam Davies/GBR) were right in the hunt, with Team Brunel (Bouwe Bekking/NED), MAPFRE (Iker Martínez/ESP) and Team Alvimedica (Charlie Enright/USA) sandwiched between them in that order.

Walker had the immediate headache of keeping pace with the Chinese team who are six points adrift of them in the overall standings and a crew who have been a thorn in their side since the event started in Alicante, back in October.

The Emirati cause will not be helped in the short term by the sickness afflicting bowman Luke Parkinson (AUS) and trimmer Adil Khalid (UAE).

The team’s onboard reporter, Matt Knighton (USA), gave a graphic account of the problems, effectively reducing the team’s firepower by 25 per cent.

“Luke had a raspy cough that has only gotten worse since leaving Newport. You can see the strain on his face each watch as he pushes through it, but lately his voice has turned from the familiar Aussie accent to nothing more than a whisper,” Knighton wrote.

“Adil can barely keep down food and is losing energy. You can see his strength leaving his arms as he was trimming on the main sail with each turn.

“With a quarter of our manpower down, the constant reefs and headsail changes are beginning to slow. The hunt to cover Dongfeng for eight days seems an impossible task. If only they knew how fragile we were.”

The boats can not access their rivals’ blogs from the boats, but all will be all too aware of the challenges of riding the Gulf Stream that the fleet has now entered.

“The waves are generally large but far more concerning is the randomness in direction and timing; there’s no order to any of it and the boat’s movements are unpredictable and sudden,” wrote Team Alvimedica’s onboard reporter, Amory Ross.

The sailors are predicted to complete this challenging and key leg between May 27 and 29.

They will enjoy a brief respite in the Portuguese capital of Lisbon, before setting out from June 7 for the frenetic finale of the race with the final two legs leading to its conclusion on June 27.