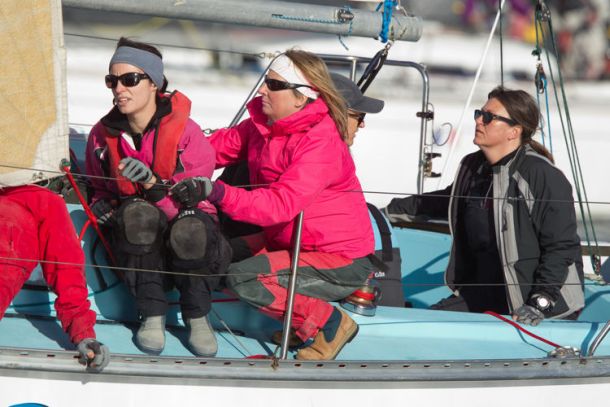 A record 26 crews sailing from four states and the Northern Territory will meet at Royal Melbourne Yacht Squadron and on Port Phillip this coming June long weekend to test their racing flair and commemorate the 25th anniversary of the Australian Women’s Keelboat Regatta.

Saturday’s long range forecast shows light WSW winds ahead of a tempo change on Sunday June 7, 2015, up to 20 knots of WNW breeze and a top of just 15 degrees on the bay.

Given the regatta was borne after a pair of Aussie go-getters competed in a New Zealand women’s championship then put the idea of a national series on the table, a major bonus to the starting line-up is Melinda Henshaw’s Kiwi entry.

“The idea to be part of this year’s AWKR came to us when seven Australian women came across to sail in the NZ nationals in March this year and bravely took on the Kiwis in the MRX class,” said Henshaw.  “Our crew of Helen Buchanan, Fiona Ryder, Elizabeth Campbell and Rebecca Dunn is a brand new team and we relish the challenge of learning to sail the S80 we are borrowing, and giving the Aussies a run for their money!”

AWKR pioneer Gai Clough was inspired to create the first all-women regatta after she and Kerry Goudge crossed the Tasman Sea to contest an international women’s keelboat title. Clough went on to be voted the first female commodore of a royal Australian yacht club – the RMYS. Her contribution to women’s sailing and in particular the AWKR will be acknowledged when Gai presents the Aurora trophy to the EHC handicap winners at the final awards ceremony on Monday June 8 at the host club.

Gai’s legacy also carries on through daughter Sarah, a regular AWKR skipper. She’s helming an SB20 called Back of the Bus Boys for the silver jubilee edition this coming Queen’s Birthday weekend.

Winging it out of the far west is a team called #SailingSistas, skippered by Mandy McEvoy and helmed by Kirstin Norris, a Royal Australian Navy engineer and talented ISAF ranked match racer who grew up in Perth sailing Pelicans, 420s and Lasers.

AWKR committee chair and competing skipper Jody Lukeman says, “I can't believe it's here already. We are looking forward to celebrating some special guests and achievements over the last 25 years and hope all competitors past, present and future can join us off-water to celebrate the event’s jubilee.

“We set a tall order target for the 25th regatta and while we came close to having all states and territories represented, it is a broad and impressive fleet and every entry over 21 set a new record,” Lukeman added. “The committee and race management team have worked hard to put what promises to be a terrific event together and we are looking forward to welcoming competitors to the Royal Melbourne Yacht Squadron at our first official function this Friday evening.”

Two races are scheduled to start daily at 1000hrs on Port Phillip to the west of the St Kilda breakwater and east of the shipping channel over three days, June 6-8, 2015. The long distance course may extend as far as Brighton. Technical delegate Lou Hutton and RO Tony Lukeman are in charge of the race management.

AWKR caters for women of all skill levels and offers serious competitive sailing as well as the opportunity for novices to get a taste of the sport. The event continues to thrive based on the extraordinary generosity of an assortment of owners from around the bay who lend their boats to crews directly and to regatta organisers to match up with boat-less teams.

The field for the silver anniversary stretches from SB20 sports boats to one design S80s, Adams 10s and J24s right up to a 38-foot Bavaria Match called Mrs Overnewton skippered by Helen Willmer from South Australia.