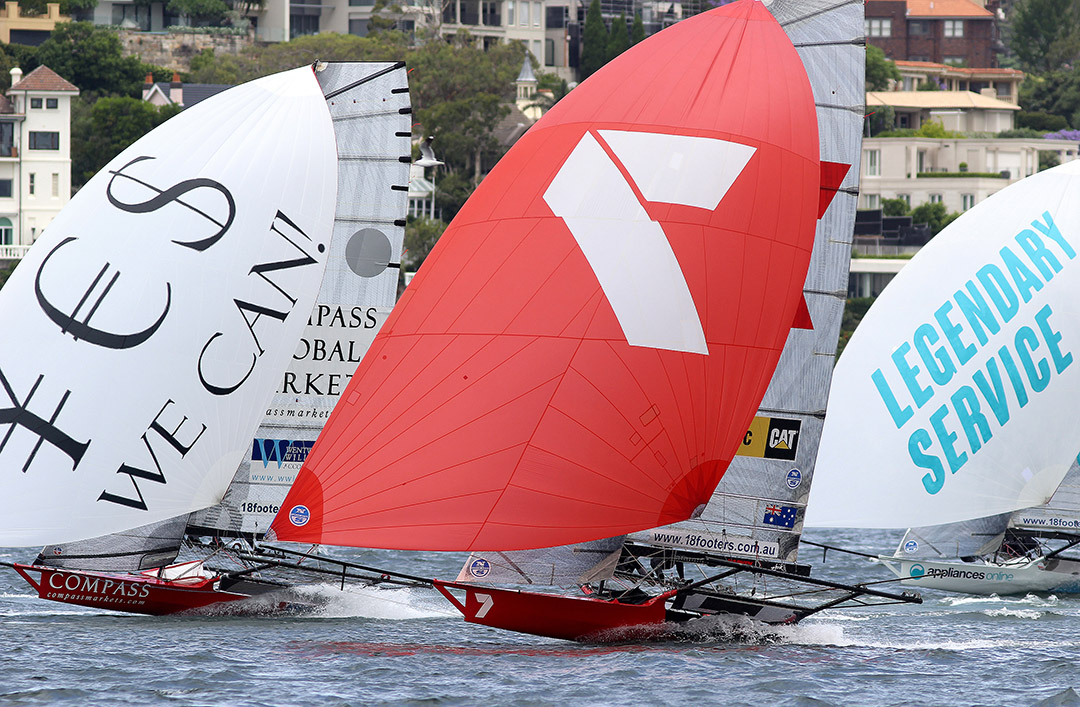 Keagan York’s Finport Finance will feature a brand-new team when it lines up against 17 other top performers at the Australian 18 Footers League for the club’s 2021-22 season on Sydney Harbour.

Keagan, Director and Co-Founder of sponsoring Compass Global Markets, who is the sheet hand on the Finport Finance skiff in 2021-22, has been competing in the 18s since 2010-11 but announced recently that he will move from skipper to the sheet this season to accommodate the talents of his new skipper, Robert Greenhalgh.

Phil Marshall will once again feature in the bow of what should be one of the very best combinations in the highly talented fleet.

After coming to the 18s as sheet hand for Simon Nearn’s De’Longhi-Rabbitohs team in the 2010-11 season, Keagan sailed with Simon until he decided to go his own way as skipper of a self-sponsored skiff in 2014-15, which Keagan, Greg Dixon and Matt Stenta competed in as compassmarkets.com.

Two DNF results in the 2015 JJ Giltinan world Championship naturally affected the team’s overall placing in the fleet, but since that regatta, Keagan-led teams have always been well inside the top-10 in the world’s major championship.

According to Keagan, “while we don’t hold back, we focus on the percentage plays. Taking flyers just isn’t in our DNA.”

A name change to Finport Finance in the 2017-18 season gave York his best championship result in the 18s when, along with Matt Stenta and Angus Williams, the team finished fourth in the 2018 Giltinan world Championship.

The team had two race wins, a second placing, a third and a fourth, but unfortunately had to carry a thirteenth placing, which spoilt a great regatta.

The inclusion of Rob Greenhalgh into the 2021-22 season team will ensure the team maintains its high standard.

When Rob’s team totally dominated the 2004 JJ Giltinan world Championship with winning margins averaging two minutes, he became only the third skipper from the northern hemisphere to win the world’s premier 18 Footer championship.

He has competed in five Volvo Ocean Races, winning with ABN AMRO ONE in 2006 and finishing second on two other occasions, and won the 2007 Extreme Sailing Series, and was also a member of the transatlantic record-breaking Comanche team.

As Keagan points out, “Rob’s based here now with his new family, and it would be hard to have him on the sheet when I know he’s a better steerer then I am. I have pushed myself one place forward to the old position of sheet hand for the betterment of the team and overall performance.”

“Our view on the season is to mainly have fun and see where the cards might fall. As a mostly amateur crew, because of work commitments, we understand that battling the likes of some of the top teams was a tough battle, but that doesn’t mean we are easy beats. Yes, we want to win, once the start gun fires there is no holding back.”

Phil Marshall will be having his seventh season in the 18s, after coming into the class with James Ward’s Mojo Wines in 2015-16. He had two seasons with James, then four with Brett Van Munster on Appliancesonline, before moving over to Finport Finance in the 2020-21 season.

This season will be Keagan’s twelfth sailing in the 18s, including his eighth as sponsor.

Describing his business, “Finport was created for growing businesses that are ready to invest in their future, but just can’t get the banks to play ball. We’re an independent provider of working capital across Australia with offices in Sydney, Melbourne and Perth delivering innovative funding solutions for businesses Australia wide.”

The ‘new team’ will have its first race when the Australian 18 Footers League conducts the opening race of its 2021-22 season on Sydney Harbour. The opening date is dependent on the clarification of government COVID-19 regulations, but is likely to be as soon as Sunday, October 24.