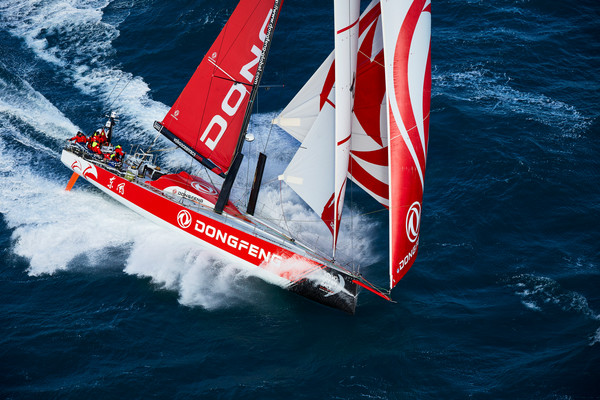 Their sails have powered eight out of nine Volvo Ocean Race winners since 1989-90, with Steinlager 2.

Here's everything you need to know about North Sails' sails.

1 ) They're not paneled, they're composites

Instead of assembling cloth panels into a particular sail shape, the Volvo Ocean Race sails are composites. This means that 3Di material 'tapes' are laid in a specific arrangement, offering stable structure to the sail where it is needed most. The outcome? An unmatched weight to stiffness ratio and advanced durability. This is a patented process at North Sails, so you won't be able to get 3Di composites from anywhere else in the world.

Sail design today encompases a lot more than it used to. When a new boat is commission, designers will often bring North Sails into the early stages of planning to collaborate on producing a well-balanced boat. This is exactly what happened in the case of the Volvo Ocean 65, when Farr Yacht Design worked closely with both North Sails and Southern Spars to create a cohesive package where the hull, appendages, spars and sails were all designed with the next in mind. And it's not just about what sail you have, it's what you do with it. That's why each Volvo Ocean Race team receives a bespoke Velocity Prediction Program, illustrating the potential performance of their boat according to inputs such as true wind speed and angle, and advises the proper sail to be used in order to optimise racing performance in each condition.

3) Each sail is part of an eight-piece puzzle

Each Volvo Ocean Race team receives a full sail inventory, which assembles like a jigsaw puzzle to create a package. While the sails across the fleet are all identical, the difference lies in how they're used – with slight variations of angle, trim and tuning. Each team will push their boat, rig and sails slightly differently, inching out every last bit of performance.

If there's one thing that Volvo Ocean Race sailors are good at, it's making the boat go fast. There aren't many people who have raced relentlessly through the toughest oceans on the planet, and so the Volvo Ocean Race provides invaluable real-life test bench in order to continue the evolution of North Sails' products. For the 2017-18 edition, the teams will have one more sail in their inventory, expanding the range from seven to eight sails.

“The teams were forever changing configurations in 10-15 knots upwind and tight reaching. When using the masthead zero the teams were pushing the boat too hard. Changing to the J1 made them under powered. So one of the changes we made for 2017 was to add a J0, which fits between the MHO and J1 and covers that range.” – Gautier Sergent, North Sails designer.

5) With every change or upgrade, there's a domino effect

The introduction of a J0 to the sail inventory has led to some other key changes in the range. For example, the Fractional Code Zero, or FR0, which was previously used in a very small upwind range between the J1 and masthead zero, is now a dedicated downwind sail. The FRO for the 2017-18 edition is made of 3Di FORCE, a new downwind application of North Sails 3Di composite sailmaking. This means that the sail is more stable with a 3Di structure throughout an increased range of conditions, which is great news for both sailors and designers. The added bonus of 3Di is that the sails are more easily repeated, as moulded sails offer more streamlined manufacturing and assembly than paneled ones. Each type of sail can be made in sequence: the mold is set once and the sails are consolidated one by one, which is key in a One Design class.

“The process of producing the raw sail shape is now fully automated and several quality control steps are taken along the way to ensure consistency. In the past, manually joining panels to produce a sail meant no two sails were ever identical. North Sails 3Di has solved this problem and is the only option for a One Design race at this level” – Nathan Quirk – Head of Sail Loft Division, The Boatyard

What would be the point of three times more Southern Ocean racing we're going to enjoy in 2017-18 if we didn't have the sails to make the most of it? Well, not to worry – the new sail inventory is perfectly-suited for a decidedly downwind course. That downwind FRO? It's full shape and straight exit are designed to harness the wind and send the sailors surfing down 20ft swell. We're jealous already.

7) It's all in the planning

Although there's no easy predictions when it comes to the Volvo Ocean Race, any round the world sailor worth his sea salt will tell you that there are plenty of miles to be gained by studying data – and sail designers are no different. North Sails have already done extensive routing with two inventories, to ensure they're using the right balance – and with the introduction of the J0 and the changing of the FRO, there should be a lot less sail changes required.

There is no crystal ball when it comes to predicting a race around the planet, but sail designers can study the race route and draw decision making data from historical weather patterns.

There's not much tougher test for a sail than the Volvo Ocean Race, and that's why there's a dedicated Boatyard team featuring a host of expert riggers, builders and sailmakers travelling to every Host City and working around the clock to keep the boats in good shape. They check between 60-80 sails every stopover, so reliability is key – and with 90% of all damage to sails happening during maneouvres and sail changes, subtle changes to the finishing of the sails to improve handling has been a game changer. To cut the time and energy used onboard, the luff length on the code sails has been reduced to allow for easier sail “peels” or changes, and, additionally, a relatively simple fitting – called an 'integrator' – has been added to the A3 (the biggest sail on board). This enables top-down furling which is preferred over bottom-up for larger running sails due to a faster, neater result and less chance of damage.