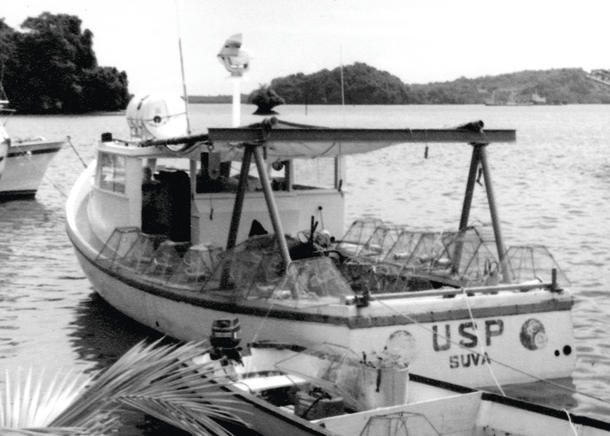 The University of the South Pacific research vessel Nautilus loaded and ready with shrimp traps.

Most cruising sailors and other travellers look forward to eating fresh seafood when visiting Pacific islands. Many sailors catch their own fish from nearby reefs and some choose to buy from the ubiquitous coastal fish markets. In the latter case, it is best to get to the markets early as ice is often too expensive for locals to use.

However, in the midst of all of this plenty I once had the worst fish meal that I have ever had.

While working as a marine biologist at the University of the South Pacific in Fiji something happened that kept me engaged in absorbing work for several years. The appointment at the university was a dream one; I was given an office and laboratory overlooking the old flying boat base in Laucala Bay where my yacht, the 48 foot ketch Lady Faye, was moored.

I was examining the gut contents of some snappers caught in deep water beyond the coral reefs and, when I opened up the stomachs, several red shrimps spilled out onto the laboratory bench. I was astonished, the strange-looking shrimps were bright red and the females carried blue eggs on their swimming legs. The red coloration was typical of deepwater creatures and suggested that these shrimps were eaten by snappers in depths of over 200 metres.

Why is it that many marine creatures from deepwater are red? White light consists of a mixture of all of the colours of our visible spectrum (red, orange, yellow, green, blue and violet). Red light has the longest wavelength and the least amount of energy. Wavelength decreases and energy increases from red to violet light across the spectrum.

As light wavelength decreases from red to blue light, so does its ability to penetrate water. Blue light penetrates the furthest and red light is quickly filtered from water as depth increases.

A red coloured fish swimming near the surface would appear red as this colour is reflected and other colours are absorbed. However, in deep water say deeper than 100 metres and in the absence of any red light to reflect off the fish, the red fish will appear black and be effectively invisible to predators in the dark water.

Even at lesser depths red is rapidly stripped from penetrating white light. I once cut myself on a reef while diving at a depth of 30m and my blood disconcertingly appeared a muddy black.

I was excited by these weird crustaceans and made some simple traps with steel reinforcing rod frames covered with chicken wire mesh. I set the traps from my yacht outside the coral reef which forms a barrier around the area of Suva Harbour. When I hauled them in, there they were: several different species of red shrimps in each trap.

I found that the catch rates of the shrimps tended to increase with increasing depths and distance from the reef. The best catches were in depths of over 600m. So I needed a more suitable boat than the yacht that I had sailed in from Australia to Fiji.

The university had a 40 foot research vessel, Nautilus, which was fitted with a hydraulic winch so I made arrangement to use her. Over the following months, whenever I was not teaching, I mapped the depth distribution of the many different species of shrimp off Suva Harbour.

Whenever a trap broke the surface there was always a thrill of expectation, an uncertainty about the deepwater creatures we would find. This spiced up the hard work and made the difference between a chore and an adventure.

To extend the surveys for deepwater shrimps beyond the area near Suva I was keen to take longer trips on the university research vessel. At the time, Nautilus was conducting surveys on deepwater snappers and I decided to go along with my shrimp traps to see what I could find.

I also thought that a bonus would be we could have a meal or two of these large snappers, which are regarded by many as the best tasting fish in the world. They were exported from Fiji and other Pacific Island countries and fetched high prices in auction houses in Honolulu and on the west coast of USA. But on this first of my extended trips, I had the worst fish meal that
I have ever eaten.

The Fijian crew and I prepared for a five day cruise to fish for snappers and to set my shrimp traps in deep water off the islands on the east coast of Viti Levu. Before the cruise, I was busy loading traps and scientific gear on board the vessel and did not take much notice of what was being put on board in the way of food. There was always a lot of fun and banter going on when working with Fijians and I was vaguely aware of the crew loading bags of rice and canned food of some sort.

After leaving Laucala Bay, we motored all day to the east coast of Fiji. We arrived in time to set the shrimp traps to be collected the following morning and used wooden hand-reels to catch a respectable haul of deepwater snappers.

Just before sunset we anchored in a beautiful quiet bay on the small island of Naqani. The anchorage, which was well sheltered by a rocky headland and just a stone’s throw off a white beach backed by coconut palms, was just like a postcard. Here we identified and measured the fish by the light of the setting sun and soon the coconut palms were just silhouettes against the night sky.

The crew lit a pressure light and set a huge Chinese stockpot of water to boil on a kerosene stove placed in the middle of the large cockpit. I listened to the hiss of the pressure light while I sat on the stern happily checking the data collected during the day as one of the crew placed a huge amount of rice in the boiling water.

I took more notice when a snapper, unscaled and ungutted, was cut in half and placed on top of the rice in the boiling water. I gloomily watched it boil for about twenty minutes, after which the cook ladled it out as a gray gruel of undercooked rice and overcooked fish. Everyone around me tucked into their bowls and I felt I had to do the same.

After each mouthful I spat out scales and bitter pieces of intestine and I realised that, as hungry as I was, I just could not eat it. It was horrible!

I pointed to a make-believe light on the dark horizon beyond the bay and, while everyone turned their heads, I flicked the remainder of my meal overboard. But an arrowy rush of small fish sped in to snap up the remains and their splashy feeding frenzy must have given me away.

After everyone had cleaned up their bowls, the kind old Fijian skipper asked me if I would like some dessert. Guessing that the cans I had seen being loaded onboard in Suva contained peaches or pineapples or something similar, I thanked him, perhaps a little too effusively, anything to take the taste of the main meal away.

I then watched in dismay as the cook picked up the stockpot and scraped as much of the remaining fish off the rice as he could. He then poured in three cans of condensed milk. The crew watched me more closely this time as I ate the gray, sweet, fish-flavoured, rice pudding.

It was a very long five-day cruise. ≈