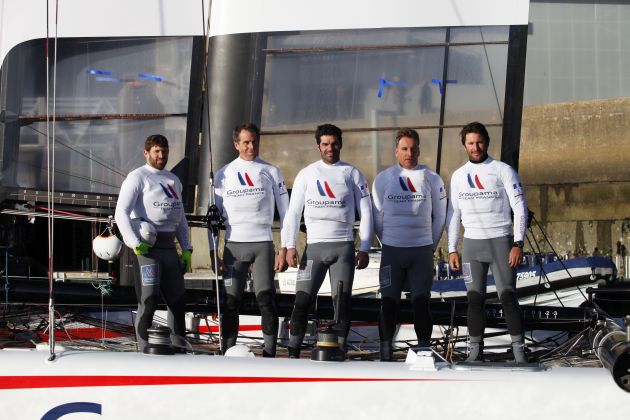 Competing in an event like the America’s Cup is a human adventure that is indissociable from technical and sporting commitment. For the past two years almost, with a ramping-up of activity back on 25 June 2015 thanks to the support of Groupama, the team led by Franck Cammas, Michel Desjoyeaux and Olivier de Kersauson, has been preparing for this confrontation that will see them pitted against the elite of world sailing.

Grouped around these three iconic sailors, Groupama Team France boasts the best possible skill sets in domains as decisive as they are complementary, such as the design team, engineering, technology, logistics, physical training and the sailing element.

Armed with a raft of experience of racing and management, Franck Cammas has brought together an entourage that includes Bertrand Pacé as coach, Neil Maclean-Martin, physical trainer, as well as French and overseas specialists, who are recognised right around the world’s race zones. This melting pot of different cultures is not just an abiding feature of the America’s Cup, it is an added bonus in the team’s bid to achieve its objectives.

Bertrand Pacé and Neil Maclean-Martin are currently training up a group of ten men, alternating between sessions on the water in Quiberon, high altitude training and time in the weights room.

Bertrand Pacé: “Though the various talents are combined within Groupama Team France, the individual personalities must serve the group as a whole. It is this group cohesion that has been the main focus of our work over the winter with what is a replenished team. We’ll see if all our hard work pays off in Oman.”

Clearly nothing has been left to chance with packed schedules and a degree of precision that is vital in order to be in a position to pilot a responsive, powerful AC45 Series. This one-design foiling catamaran measures 13.45 metres in length and is equipped with a fixed wing stretching 21.50 metres high. She is helmed by five crew, whose total weight must not exceed 437.5 kilos, or 87.5 kilos per person. The crew, which sports protective gear and compulsory helmets, is made up of a helmsman-skipper, a wing trimmer, a tactician, a headsail trimmer and a bowman.

For the first event of the 2016 preliminary circuit of the Louis Vuitton America’s Cup World Series, held on 27 and 28 February 2016 in Muscat (Oman), Franck Cammas, still undergoing rehabilitation following an open fracture of the tibia-fibula in November 2015 during training, will not be aboard. New Zealander Adam Minoprio, world match racing champion at 24 years of age and one of the helmsmen aboard the AC 45 Turbo Luna Rossa, is acting as skipper and helmsman in his absence. He will be assisted with the wing trimming by Thierry Fouchier from Marseille, who is the only Frenchman to have won the America’s Cup. Thomas Le Breton, a familiar face on France’s Olympic Finn team, will be calling tactics, while the experienced Hervé Cunningham is to trim the headsails and the fiery Devan Le Bihan will take his place on the foredeck.

The Low-Down on the team as viewed by Franck Cammas

Adam Minoprio (New Zealand). Aged 30. World Match Racing Champion (2009), second in the Volvo Ocean Race on Camper (2011-2012):
“I got to know him in the Volvo Ocean Race. He’s a ‘Kiwi’ who is somewhat different from other ‘Kiwis’. He has already done a lot of work with overseas teams and was recommended to us by Martin Fischer from the Design Team. He’s done a lot of sailing on the AC 45 Turbo and although he’s never competed on an AC 45, he’s the perfect helmsman to stand in for me, to help me progress and to step up my game.”

Thierry Fouchier (France). Aged 50. Winner of the World Match Racing Tour (2001). 4 participations in the America’s Cup, including victory on BMW Oracle (2010):
“He was already part of my team on Groupama 1 and 2 so we know each other well. He is synonymous with both maturity and calmness aboard the boat. At the same time, he’s someone who is very precise. He brings with him his vast experience of the Cup, which we didn’t have, and he always stays very calm, even in panic situations. He’s essential.”

Hervé Cunningham (France). Aged 43. A multihull specialist and an inshore racing expert in ORMA, MOD 70, D35, Extreme Sailing Series…
“I’ve raced just once with him (an Extreme 40 event), as he was often on competing projects. He has a massive amount of experience on numerous craft, including the America’s Cup, and he can’t be ignored in France. He’s a true professional, who is a valuable asset on a boat and is always where he needs to be when it’s time to help out during manœuvres.”

Thomas Le Breton (France). Aged 34. Three Olympic preparations. Number three in the world on a Finn (2011). Sailor aboard Oman Sail’s MOD 70:
“He’s only recently joined us. He has all the necessary qualities and he has the perfect profile for what we need on these boats. Not only does he have an impressive physique, he’s a very precise tactician and someone who is very calm and serene aboard, who doesn’t say much but always has wise words.”

Devan Le Bihan (France). Aged 32. Winner of the Tour de France à la Voile, Extreme Sailing Series, AC45 Series Groupama Team France in the 2015 season:
“He is a little younger so he doesn’t have the same experience as the others, but he has been working for around ten years in the domain to achieve a standard of excellence. He has a background in match racing, he’s an all-rounder and he trains very hard physically, with a very professional approach. Added to that, he’s strong!”

Arnaud Jarlegan (France). Aged 39. Two Olympic Tornado preparations (with Billy Besson), World and European champion in F 18:
“He has vast experience of sports catamarans and brings his sensitivity to small boats, which is key on an AC45. He is very tall, has better than average movement around a boat and he has very good reflex actions, particularly on this type of boat.”

Olivier Herledant (France). Aged 36. World number two in match racing:
“He has a striking profile, as he’s a big guy and has a good mind. He’s done a lot of very high level sailing for a long while, match racing with Mathieu Richard and calling tactics. He isn’t especially familiar with the multihull, but he learns very quickly and is both precise and calm.”

Matthieu Vandame (France). Aged 33. World F18 champion, winner of the Tour de France à la Voile:
“We’ve often rubbed shoulders on the Nacra 17 circuit and we’ve raced F18 together. He hasn’t yet racked up experience on big boats as he’s young, but he has an impressive physique, a good personality, motivation and the perfect attitude for this type of project.”

Nicolas Heintz (France). Aged 32. European match racing champion. GC32 specialist:
“He’s only recently joined us. He’s the man I’m least familiar with. He’s been sailing the GC32 with overseas sailors for a long while. He’s someone who is very serious about physical training and he’s a very precious asset in terms of boat preparation. Not only is he the most powerful member of the team, he also has big potential.”

The crew of Groupama Team France in Oman

NB: Franck Cammas will be observing in Oman before taking up the helm of the AC45 Series again during the training week from Monday 29 February to Sunday 6 March.