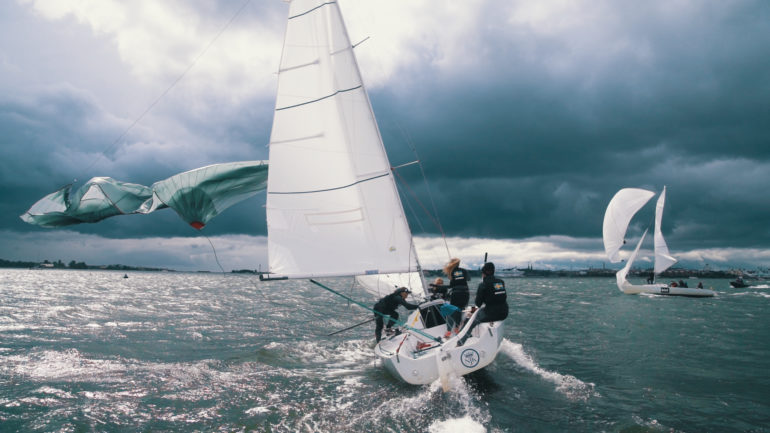 A big change in the weather brought a strong breeze from the north for the final day of racing at the 2018 Helsinki Women’s Match, the first event of the 2018 WIM Series. After three days of racing in bright sunshine, the waters of the Kruunuvuorenselkä turned grey and rough for the exciting final matches.

The day began with the semi-finals. The top team from the round robin, Marinella Laaksonen’s Finnish L2 Match Racing, had the hard decision of choosing their opponent. They chose Johanna Bergqvist’s team, which in hindsight may have been the wrong decision given the semi-final outcome.

Bergqvist and her young Swedish team came out fighting and put Laaksonen’s team up against the ropes by winning the first two matches. In the must-win situation, Laaksonen fought back and levelled the table 2 – 2 setting up a fifth and deciding match.

With the spot in the finals on the line, Laaksonen around the first lap, but an unfortunate trolling of the spinnaker at the leeward mark opened the door for Bergqvist to take the lead and hold on until the finish to advance to her first WIM Series final.

In the other semi-final match, a similar scenario set up: Pauline Courtois’ Match In Pink By Normandy Elite Team, took the first two matches before Trine Palludan’s Team Kattnakken switched on a new gear and evened the score at 2 – 2 setting up another exciting do or die match.

Racing was quite close on the first beat, but Courtois was penalized at the first windward mark with an immediate penalty red flag penalty from the umpires for taking room that was not hers to take. By the time Courtois took her penalty, Palludan carried her comfortable lead to the finish and earned her spot in the finals.

By the time the finals and petit-finals were set to go the wind had increased to 17-20 knots with gusts into the mid-twenties – challenging conditions in the powerful 8 metre J/80 boats.

In the petit-final Courtois’ team regained their focus after their tough semi-final loss and said, “We focused on keeping it simple and working on our boat handling.”

Their strategy worked and they defeated Laaksonen 2 – 0 to take the bronze medal.

In the breezy finals the Danish Team Kattnakken “focused on sailing the shifts and picking our moments to tack and gybe to stay in control” said the tired but happy crew after emerging from a refreshing sauna.

In the third match of the finals, Bergqvist looked well on her way to forcing a fourth match as she had sailed the wind shifts well and gained a comfortable lead, but on the final downwind as they gybed for the finish a huge gust of wind caused an uncontrolled broach. Before they could regain control, Palludan passed took the win by one boat length to win the championship.