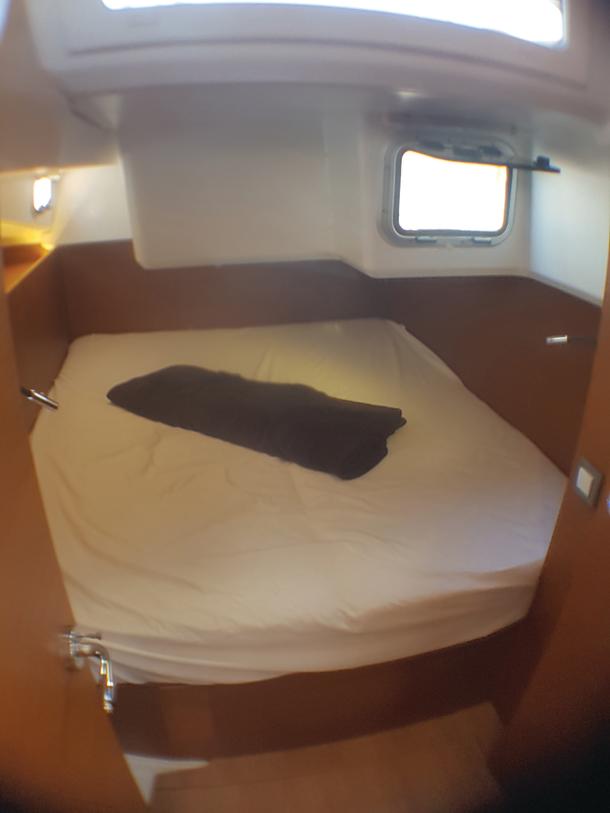 The Sun Odyssey range continues to impress with some different thinking packed into a performing hull form.

Following on from the worldwide success of the SO349 there is some similarities in this 45 footer but, markedly, mainly in the guise of improvements on factors that worked in the smaller sister, rather than direct copies.

In a comparison with the smaller 349, similarities can be seen in the underwater hull shape profile view: shallow forefoot, smooth angle drop to the centre sections with a long flat run before gently angling back up to the twin rudders at the stern. It is, however, more surprising what is happening with the hull shape above the waterline and when viewed from the masthead.

Jeanneau’s use of renowned naval architect Philippe Briand is paying dividends. The SO440 is the eighth design iteration of the Sun Odyssey range since they began in 2012. Briand has taken some cues from the mind-boggingly designed, scow-hulled Mini 6.50s being raced single-handedly around France and Europe. In those radical designs the forward sections are so rounded they challenge current thinking; but they are proving hard to beat.

To incorporate such a feature, but in no way as radical, Briand has not only made a fast design that is easy to sail but the extra beam pushed so far forward delivers volume up front that makes for quite the spacious forward cabin down below. This added volume is enhanced with a full length chine as well. A win/win for a cruising yacht.

From our test it appeared this hull shape really began to click through the gears once the true wind clocked over a mild ten knots; with most effective attained at 15kn.

Taking the helm of the test yacht, when hard on the wind at 10kn, I found we were about 30° to 35° off true wind angle, trucking nicely at over seven knots and not requiring any helm correction as the chine tracked the yacht nicely in the flat waters of Pittwater. This was sublime sailing, the twin rudders are unaffected by keel turbulence and dig deep for good grip.

This is pleasing but, as we all know, the important measurement is how she performs when the sheets are eased. We bore off to 60° true wind angle and the boat speed leapt up to the mid-8 knots, hitting theoretical hull speed easily in the 12kn breeze.

It is important to note here that the heel is not onerous.

Performance is enhanced by a full consideration of all aspects of this yacht’s design; the 7/10ths high aspect rig, for example, incorporates cathedral rigging: a small diagonal above the top spreader to effectively give you three diagonals in a two spreader rig. This reduces the need for a heavier mast section up high.

On deck is probably where the most change has occurred in this design. Many of you may have already seen the inclusion of the sloping-sided deck alongside the cockpit.

Follow this link for my short video, which best illustrates how it works: www.mysailing.com.au/boats/teaser-yacht-test-coming-in-august-issue-cruising-helmsman.

Starting at the bow, there is a neat short bowsprit that is an integral part of the deck mould, not a bolted addition, allowing the anchor to be on the centreline while not endangering the hull.

Just aft of the chain locker is a deep sail locker that can hold a full suit of sails and all the fenders and still have room to hide the bodies; courtesy of those full bow sections I suppose. It is interesting to note that the forefoot is so shallow up here that the optional bow thruster is retractable, due to not enough hull below the waterline for a permanent hole.

The spreaders are quite wide, allowing the opportunity to have the outers tanged at the hull/deck join but the inner diagonal well inboard. This provides possibly the widest gap between shrouds I think I have seen on a yacht this size; the afore-mentioned video shows how wide this gap is as well. It also provides good, tight sheeting angles for the headsails.

The mast base is standard and well-organised, but the rig design takes a cue from multihulls with the gooseneck fitting low to the deck. The boom, however, then angles up as it goes aft and ends at well over two metres above the cockpit floor for a nice safe crew area.

There is a nice high handrail running on the corner edge of the cabintop.

Then we come to the cockpit. The sloping side deck does make you think how it affects space below, but we will come to that later.

Considering the ages of some people for which this yacht would be perfect, this easy access into the cockpit is quite smart. It does not affect the cockpit and there is minimal disruption to the skipper.

No more scrambling over high coamings in that most dangerous of manoeuvres, although there is still the ability to do that with a step provided on the outside of the coamings. There is the added safety factor as the deck length bulwark remains at the same height, providing good protection for the crewmember as they go down to cockpit level; again, watch the video to see it in action.

There is a large drain at the bottom end to catch any seawater from the side decks washing into the cockpit proper. The other advantage of this sloping pathway is the ability it gives the skipper to sit outboard but facing forward while still helming comfortably.

The twin steering stations have large wheels connected to binnacles integrated into the hull mould for strength integrity. The sheet winches are easily reached here and there are two cupholders on top. A strong handhold rises high to stop people grabbing the wheel.

The skipper can sit on a dedicated spot on the side bulwark or on seats directly aft of the wheel. The port aft seat houses the gas bottle with options available under the starboard seat.

Under the deck, at the transom, are two large hatches. On the port side is a marineply box ready to accept a generator set and/or watermaker. The starboard hatch is ready for the liferaft, which can be accessed via this hatch or when the transom platform is lowered. Access to the quadrants and emergency steering is via another hatch in this space.

The centre table is large to hold a 12 volt portable fridge.

The cockpit benches are over two metres. They have another interesting design addition, the coamings can be unlocked and unfolded to lie flat and make spacious daybeds for some wonderful lounging. This option, however, is quite expensive and I am unconvinced as to the necessity.

Probably due to the size of the forward locker, the lazarettes under each bench are not deep. They are wide but shallow, good enough for most cockpit paraphenalia. The upside is it means the headroom in the aft cabins is improved, often a negative for a lot of such sleeping areas.

So lets head down below. Our test yacht was the three cabin/two heads option. First up it is good to see a dedicated navigation station making it back into interior design. I think this is a flow-on from Jeanneau’s Sunfast series of racing yachts; alongside the companionway the portside nav. seat is the perfect spot for crew to sit while on standby. To this end the seat is cushioned appropriately for a person to sit facing the nav. table or facing inboard and lie back to rest.

Forward of the nav. table is the tight G-shape galley. The shape ensures safety while also providing good bench space.

This galley design, I feel, is an indicator to where Jeanneau see the Sun Odyssey 440’s market: there is no dedicated freezer compartment. The idea, according to broker Lee Condell, is to carry one or two 12V portable fridges that will fit nicely under the nav. table or saloon table, plus up under the cockpit table. This makes providoring easy, but it suggests to me the SO440 is most suited for coastal cruising. Sure, you could fit it out to do a Tasman crossing or New Caledonia; this is not a complaint, just an observation of where this design may be targetted.

Without the space-hogger freezer the set-up of this galley becomes interesting. It is smallish, which is good for securing the cook but it limits the amount of cabinet cupboards. The answer is to have cutouts in the benchtop for top down access into large spaces; one of which is set aside for a pop-up microwave option.

There is shelving across the back of the galley along the port hull, same behind the lounge to starboard. Around the rest of the saloon is all manner of cabinets for plenty of storage, especially under the seating and berths.

Jeanneau are using a new style of cabinet door closer that makes a nice flush finish on the doors. They look stronger, thankfully, than the popular push button.

Finally, there is a massively large storage holder under the main floorboard, pneumatically hinged for ease. Seacock access is easy, although larger openings in the floorboards may have been nicer.

The fiddlework is both deep and strong and dotted plentifully around the saloon, which is good as there are no overhead handrails. Hull windows run nearly the full length of the saloon and all three cabins, adding to its spacious feel.

Which brings us to the cabins. This is where those full bow sections show off.

Past the double doors in the fore bulkhead, the master cabin double berth is 160 centimetres wide and two metres deep. In fact, all three cabins have the same size berths, which fit standard linen sizes. They consist of two double single mattresses so lee cloths can be rigged in between.

Hanging lockers are to starboard and the master head to port. While the head is tight, I could put my hands on my hips and rotate in the shower with the door closed, so that is adequate.

Headrooom was a comfortable 190cm. Seriously, you could find a same size forward cabin on a yacht ten feet longer.

The starboard aft cabin has a separate entry to the head aft of the lounge. This head is slightly larger than the master head.

The port aft cabin has the batteries neatly laid out underneath.

Time to head home and put the 33kW Yanmar through some paces.

Cruising revolutions per minute is usually 2,500 and, at that rate, we were nearly hitting theoretical hull speed. Condell says you can sit on 1800rpm and still cruise at a decent 6.5 knots for more economical usage.

Push the throttle lever to maximum speed and we got over 3,100rpm for a respectable 9.2kn. Its 200 litre fuel tank should give you around 50 cruising hours.

Over the past decade it has been difficult to find any significant differences between the competing production yachts coming to Australia from around the world. A successful formula has been found, so each builder cleverly massages the formula to suit the target market.

Following the Sun Odyssey 349 from a few years back, Jeanneau appear to have found a significant tweak to that formula, producing a range of yachts showing there can be a difference that still produces the goods. ≈